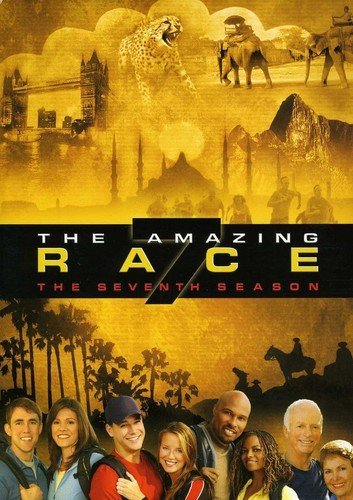 The Amazing Race - The Seventh Season

The seventh season of the Emmy-® winning Amazing Race was far and away the most successful to date, thanks to the participation of Survivor favorites Rob and Amber. Every episode from that season is included here, as well as plenty of infighting, treachery and globe-trotting adventure. 12 episodes on 4 DVDs. 2005/10 hrs., 49 min/color/NR. .com ---- For its seventh edition, The Amazing Race welcomed two familiar faces. Reality TV vets Rob and Amber were one of eleven teams competing for the million-dollar prize. The other contestants covered the spectrum, like boyfriends Lynn and Alex, brothers Brian and Greg, married couple Uchenna and Joyce, and mother/son duo Susan and Patrick. The latter decides he'll do whatever it takes to beat Boston Rob. As he notes in the season premiere, "I watched Survivor. He's as dumb as a rock." The shows top-rated installment spanned five continents and 40,000 miles, from Long Beach, CA to Fort Lauderdale, FL. Other pit stops include Buenos Aires, Istanbul, and London. Some of the more colorful challenges include llama herding in Peru and cave rappelling in South Africa, while the emotional high point is a trip to a Soweto orphanage, an experience that reduces Uchenna and Joyce to tears. There will also be sacrifices along the way, as when Gretchen, the second oldest contestant--after her 69-year-old husband, Meredith--has a frightening fall and Joyce says so long to her hair. The seventh season of The Amazing Race is broken into 12 episodes, including three two-part programs. This boxed set features a mini-documentary, chatty commentary from four of the highest-ranked teams, and over three hours of deleted material. After the race aired, Lynn and Alex and Rob and Amber--on network TV, naturally--tied the knot. It was also revealed that Joyce once had a recurring role on Star Trek: The Next Generation. --Kathleen C. Fennessy
Show More
Reviews

The Amazing Race - The Seventh Season