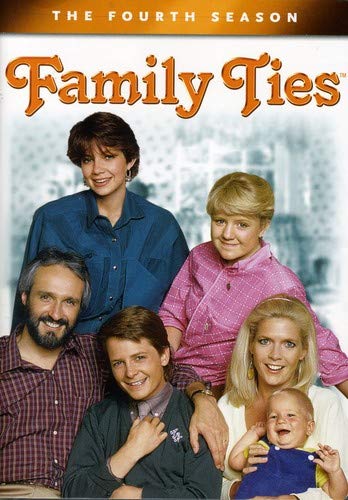 Steve and Elyse Keaton (Michael Gross and Meredith Baxter-Birney), once 1960s radicals, now find themselves in Reagan-Era American trying to raise a traditional suburban family. Son Alex P. Keaton (Michael J. Fox) is an ambitious Young Republican and his sister Mallory (Justine Bateman) is a shallow victim of the corporate culture, obsessed with music, clothes and boys. Their only normal kid is young Jennifer (Tina Yothers), a bit of a tomboy. .com ---- Romance was in the air in Family Ties' fourth season (1985-86), when it was in the coveted 8:30 p.m. slot following The Cosby Show in NBC's Must-See TV Thursday lineup. When Alex (Michael J. Fox) is starting his sophomore year at Leland College, his plan to pick a prospective girlfriend from the freshman directory goes awry when he battles with her art-major roommate, Ellen (Tracy Pollan). Not surprisingly, opposites attract, and Alex and Ellen's dance together and the heart-tugging aftermath became one of the series' emotional high points and made a No. 1 single out of Billy Vera and the Beaters' "At This Moment." (It turns out that Fox and Pollan's incredible chemistry wasn't just acting: they married less than three years later.) Many of the season's best episodes feature Alex and Ellen, including those involving her father (played by Ronny Cox), but another major character was added in Nick (Scott Valentine), the Kawasaki-riding, garbage-art-making, earring-wearing boyfriend of Mallory (Justine Bateman). Nick, whose favorite greeting is "Ayyy!", immediately sets off warning bells for Mallory's father Steven (Michael Gross), though the Rambo comparisons seem silly today. Also in the season, Mallory tops Alex in an IQ test, Stephen finds a new and demanding job, Elyse (Meredith Baxter-Birney) and Alex take an automotive class, Jennifer (Tina Yothers) winds up in a difficult spot when Alex helps her with a speech, and Skippy (Marc Price) finally decides to pursue Mallory. Guest stars include River Phoenix as Alex's 13-year-old math tutor, Martha Plimpton as a young shoplifter, and Peter Scolari as Elyse's romantically inclined coworker. The four-DVD set has the 90-minute Family Ties Vacation movie that aired before the season started, episode promos, the original theme song, and the original Billy Vera song. --David Horiuchi .com In TV Land, a new baby, or the introduction of new love interests are traditionally ratings ploys to prop up a sagging series. This was not the case with Family Ties, which in its fourth season was ranked second only to The Cosby Show in the ratings and Emmy-nominated for Best Comedy Series. Breakout star Michael J. Fox would win his first Emmy as Alex, primetime's first compassionate conservative, while costar Justine Bateman received a nomination for her deft work as underachiever Mallory. The season, and this box set, gets off to a jolly good start with the feature-length "A Family Ties Vacation," which sends the Keatons off to England, where they become embroiled in espionage (hey, it could happen). Once the season proper begins, the show regains its solid footing with the key additions of Tracy Pollan and Scott Valentine in recurring roles. Pollan, the future Mrs. Michael J. Fox, is introduced in the Emmy-nominated two-parter, "The Real Thing," in which Alex meets his match in the beautiful and brainy Ellen Reed, and falls in love with her (to the indelible tune of "At This Moment" by Billy Vera & the Beaters). Valentine etches a fine and funny portrait of every parent's initial nightmare as Mallory's new boyfriend, an "environmental artist" who seems to be channeling Sylvester Stallone. He reveals his more soulful side in the episode, "The Old College Try," in which he changes Mallory's mind about not wanting to go to college. Family Ties' ensemble is thoroughly at home in their iconic characters. Each handles the prolific jokes like Friars Club roasters, as well as the more emotional moments. Happily, this season goes easy on the Very Special Episodes. Even so, the few two-parters aside, there is no issue that cannot be resolved within the allotted 30 minutes, whether it be Ellen's estrangement from her father (Ronny Cox) in "Where's Poppa," or Mallory being forced by a teacher to "grow up" and apply herself in order to graduate high school in "Paper Chase." There are no early appearances by future A-listers along the lines of Tom Hanks and Geena Davis from previous seasons, but a young River Phoenix impresses in the episode, "My Tutor," as Alex's 13-year-old tutor who becomes a "crazed lunatic" over Jennifer (Tina Yothers). The Keatons were one of television's most functional families and it's heartening to watch them grow. These are the Ties that bind. --Donald Liebenson
Show More
Reviews