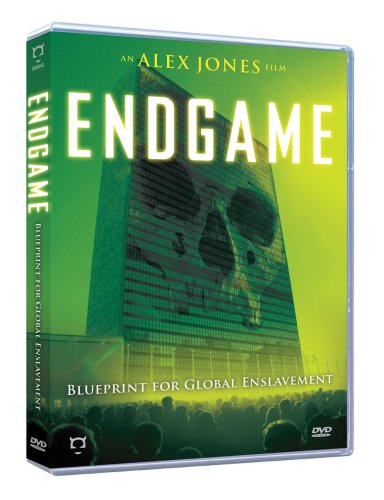 Brand : Alex Jones
from USA
to UAE
in 5-8 days
At your doorstep by Dec 06  to Dec 09 with standard delivery

Alex Jones is a true patriot, a genuine hero. - Actor/Director Charlie Sheen For the New World Order, a world government is just the beginning. Once in place they can exact their plan to end 80% of the population and help the select, chosen few of the planet live forever with the aid of advanced technology. In Endgame, documentary filmmaker Alex Jones chronicles the history of the global elite s bloody rise to power and reveals how they have funded dictators and financed the bloodiest wars using order out of chaos to pave the way for the first true world empire. Watch as Jones and his team track the elusive, secretive Bilderberg Group to Ottawa and Istanbul to uncover their secret summits, allowing you to witness global kingpins setting the world s agenda and instigating World War III. Learn about the formation of the North American transportation control grid, which will end U.S. sovereignty forever. Discover how the practitioners of the pseudo-science Eugenics have taken control of governments worldwide as a means to carry out depopulation. View the progress of the coming collapse of the United States and the formation of the North American Union. Never before has a documentary assembled all the pieces of the globalists' dark agenda. Endgame's compelling look at past atrocities committed by those attempting to steer the future delivers information that the controlling media has meticulously censored for over 60 years, fully revealing the elite s agenda to dominate the earth and carry out the most wicked plan in all of human history. Extras and features: Bilderberg 2007 Report - Extended footage of the annual secretive conference The Battle for the Republic featurette with extended interviews and footage Special performance of Shackles on Me by Blues legend Jimmie Vaughan .com ---- Alex Jones's new documentary, Endgame, posits several theories relating to "the dawn of a new dark age" in which a few elite businessmen are planning to erase global boundaries in order to conglomerate the governance of three disempowered populations: the E.U., the North American Union, and the Asian Union modeled after Communist China. This plan allegedly involves depopulating countries around the world, constructing superhighways that connect otherwise unreachable regions throughout America, and forming paramilitary groups to infringe on personal freedoms and privacies. Interview footage of journalist Jim Tucker among many dubious others is spliced amongst myriad historical footage of the past two World Wars, right wing political speeches, eugenics charts, and shots of woodcuts depicting Napoleanic conquests and the Roman empire, impling that our society's political conservatism bears resemblance. But in tracing the formations of the League of Nations, the U.N., and finally Bilderberg Group in 1954, Endgame accuses these groups of trying to merge countries and eliminate international borders, without really assessing the fact that this has never been a secret. It will also seem obvious to many viewers that private parties "bankroll" wars for economic gain, not always philanthropic. Toward the film's end, an extended segment about Planned Parenthood's ties to early eugenics groups, which accuses Ted Turner and Bill Gates of buying into depopulation plans because both have donated funding to promote birth control in third world countries, reveals a pro-life agenda. In addition, after watching multiple clips of Jones himself yelling into people's car windows, wondering why the airport security are detaining him for following businessmen with a camera, stalking visitors at a Canadian hotel, and making other various rash gestures, it is difficult not to see Endgame as one man's elaborately considered conspiracy theory. Trinie Dalton P.when('A').execute(function(A) { A.on('a:expander:toggle_description:toggle:collapse', function(data) { window.scroll(0, data.expander.$expander[0].offsetTop-100); }); }); Review ------ Alex Jones is a true patriot, a genuine hero. --Actor/Director Charlie Sheen About the Actor --------------- Alex Jones has been featured in such publications as The Wall Street Journal, USA Today, The Dallas Morning News, The Los Angeles Times, The Austin-American Statesman, and The Austin Chronicle, Alex Jones has created a powerful platform in an attempt to re-create a Bill of Rights, freedom-orientated culture in the face of an ever more federalized and security-obsessed America. Alex Jones broadcasts nationwide on the Genesis Communications Radio Network. If you've never heard of Alex Jones, then you've been missing out on some of the most dynamic, hard-hitting radio on the planet. Syndicated radio journalist and documentary filmmaker Alex Jones has been on the front lines of the growing global information war from ground zero to the occult playgrounds of the power-mad elite. He has been featured in countless publications, television and radio programs and has himself made an incredible 15 documentary films covering a wide range of important social and geo-political issues. From implanted microchips to the police state, The Alex Jones Show has the daily developments and important guests to bring you the real truth and nothing but. See more ( javascript:void(0) )
Show More
Reviews