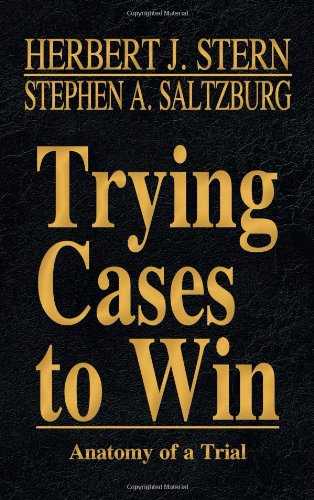 Brand : Brand The Lawbook Exchange Ltd
from USA
to UAE
in 5-8 days
At your doorstep by Dec 10  to Dec 13 with standard delivery

Anatomy of a Trial. Volume V, Trying Cases to Win. Description (3900 characters maximum): Originally published: New York: Aspen Publishers, 1999. Reprinted 2013 by The Lawbook Exchange, Ltd. xviii, 584 pp. The trial process is the sum of its parts-opening argument, direct and cross examination, and summation. In Trying Cases to Win, nationally known trial lawyer Herbert J. Stern provides an overall blueprint for conduct in the courtroom as he guides the reader through each of these segments. Rather than a collection of anecdotal war stories from various trials, Stern outlines the nuts and bolts of the right-and wrong-approach, processes and strategies for every component needed for trial success. Each volume is available separately. In this volume, Anatomy of a Trial, Stern and his co-author, Stephen A. Saltzburg, bring the principles of the other volumes in the Trying Cases to Win series into action. They offer a line-by-line review of all of the parts of a trial while looking at the importance of emotion in the decision process and its relationship to the facts presented. This detailed analysis, from the viewpoints of the attorney and the jury, demonstrates good and bad advocacy in every stage of the trial. Contents: 1. Opening Instructions; 2. The Opening Arguments; 3. The First Witness; 4. The Second Witness: Nick Craggs; 5. The Sweeney Deposition; 6. The First of "The Blues" Witnesses: Brian Sullivan; 7. The Alleged Villain: Helen Hardy; 8. Concluding the Plaintiff's Case and Motions; 9. The Defendant's First Witness: Mr. Maresca; 10. The Trustee Witnesses; 11. Ms. Hardy Returns; 12. The Ruling on Defendants' Motion; 13. Ms. Hardy Continues and the Defense Rests; 14. Final Motions, Closing Argument, and Verdict; 15. Epilogue; Index. Author Bio (3900 characters maximum): Herbert J. Stern is a highly regarded trial lawyer and accomplished teacher of trial techniques. A partner and founding member in the New Jersey law firm of Stern & Kilcullen, Stern is a former Federal Judge, having served as United States district judge for the District of New Jersey from 1974 to 1987. He established his reputation as an advocate while serving as a trial attorney with the Organized Crime and Racketeering Section of the United States Department of Justice from 1965 to 1969 and as United States attorney for the District of New Jersey from 1970 to 1974 when he won a national reputation for unprecedented convictions of numerous public officials. He was founder and Co-Director of the Advocacy Institute at the University of Virginia School of Law from 1980 to the present. He was Special Counsel for Hon. Lawrence Walsh, Independent Counsel, Iran-Contra Prosecution, 1988. Judge Stern was the subject of the book, Tiger in the Court (Chicago: Playboy Press, 1973). He is the author of Judgment in Berlin (New York: Universe Books, 1984) which was made into a major motion picture with Sean Penn, and Martin Sheen playing Judge Stern; and, most recently, Diary of a DA: The True Story of the Prosecutor Who Took On the Mob, Fought Corruption, and Won (New York: Skyhorse Publishing, 2012). Review 1 (3900 characters maximum): ... a crowning achievement in a career devoted to helping all lawyers, from beginners to veterans, become more knowledgeable in the art of advocacy. Source: -- Arthur J. Greenbaum, Cowan, Liebowitz & Latman, PC, New York, NY
Show More
Reviews

Trying Cases to Win Vol. 5: Anatomy of a Trial