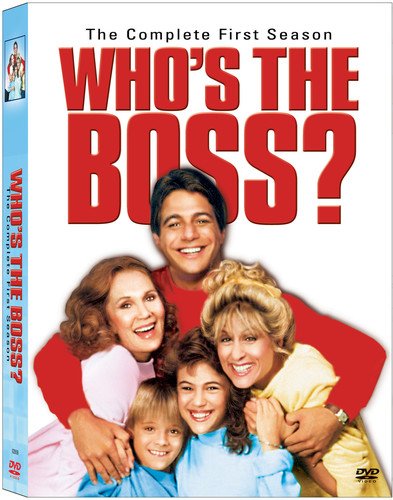 Who's the Boss? - The Complete First Season

Tony Danza, Judith Light, Alyssa Milano, Katherine Helmond. When a career-ending injury forces a baseball star into early retirement, he takes a job as a live-in housekeeper for a pushy advertising executive and her nosy mother-but who's the boss? Includes all 22 episodes from the hilarious first season on 3 DVDs. 1984-85/color/10 hrs/NR/fullscreen. .com ---- Who's the Boss? was a standard sitcom--turned on its head. Sure, there was a mom, a dad, two cute kids, a house in the suburbs... and a live studio audience. But Angela Bower (Judith Light) was a single advertising exec with a son (Danny Pintauro) and Tony Micelli (Tony Danza) was a widowed ex-ballplayer with a daughter (future Charmed star Alyssa Milano). The Connecticut mansion belonged to Angela (along with the big '80s hair and shoulder pads) and Tony wasn't her boyfriend, but rather her housekeeper. Then there was her mother, Mona (the incomparable Katherine Helmond). The sexed-up, slightly cracked grandmother is a primetime staple, but in the former Soap matriarch's hands, the character was a cut above (and usually got the best lines). As Angela complains to her in the pilot, "You've sent me a man for a housekeeper!" "Oh, don't be sexist," Mona replies. "A man can do meaningless, unproductive work just as well as a woman." "Meaningless, unproductive work" is what Tony does for the Bowers--and does well--but he and Samantha (Milano) also become part of the family. Angela and Tony go on a number of dates with other people, but there's an obvious sexual tension between them. The show would continue to exploit that tension for eight seasons to great success (even inspiring a British version called The Upper Hand, with Honor Blackman as the "Mona" character). Helmond, meanwhile, would garner an Emmy and a Golden Globe for her efforts. Highlights include "Mona Gets Pinned," in which Mona takes up with a younger man, and "Angela's Ex, Part I," in which Angela reconciles with her estranged husband--who proceeds to fire Tony. Guest stars include Betty White (Mary Tyler Moore) in "Eye on Angela" and Danza's Taxi co-star Jeff Conoway in "First Kiss." --Kathleen C. Fennessy
Show More
Reviews

Who's the Boss? - The Complete First Season