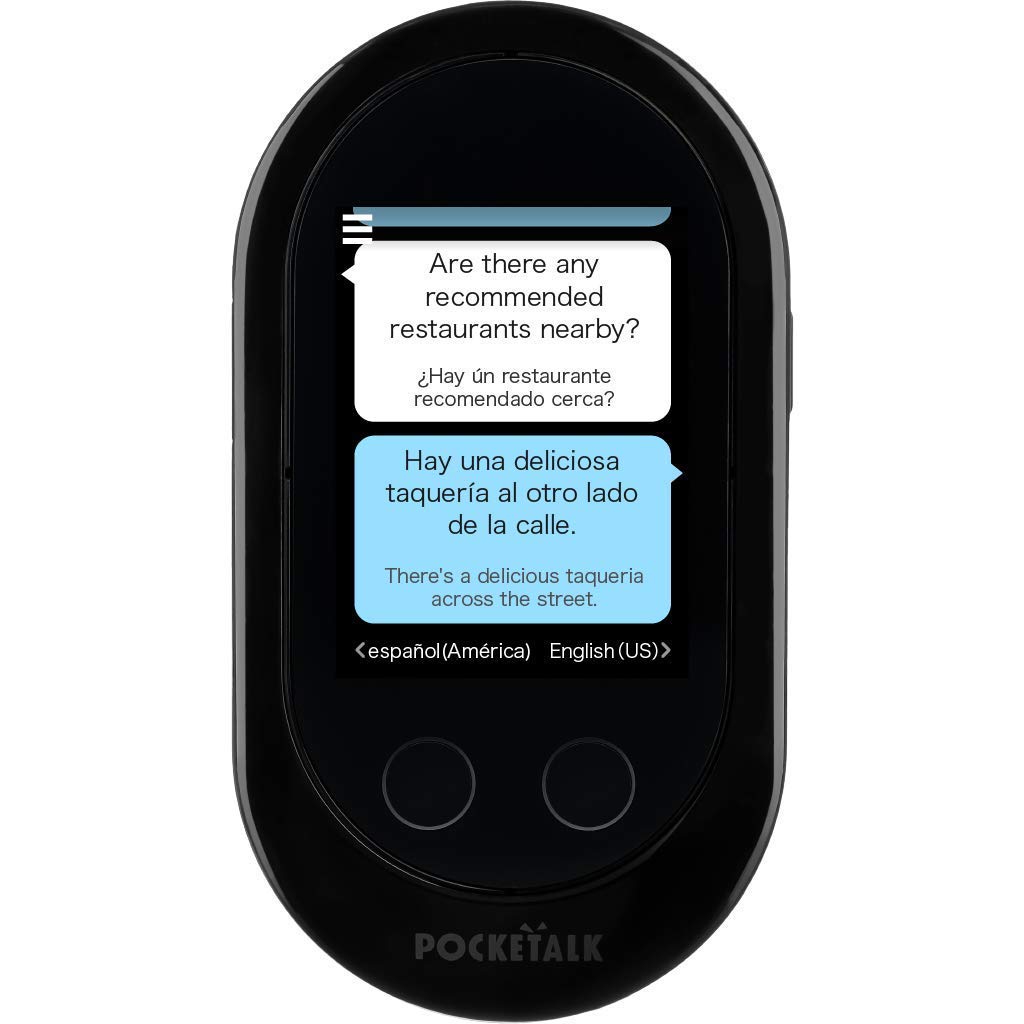 Brand : Pocketalk
from USA
to UAE
in 5-8 days
At your doorstep by Jul 11  to Jul 14 with standard delivery

Color:Black_ Have you ever visited a foreign country and wished you had a language translator with you? With Pocketalk, a two-way voice translator device, you can travel to over 100 countries around the world and communicate with confidence. Using cloud-based translation engines, Pocketalk offers the most up-to-date and accurate translations. This smart device continues to learn as you use it. Whether you're traveling through Asia or backpacking through Europe, Pocketalk is your ultimate travel companion. Created for conversations, Pocketalk allows you to speak in your native language, handling up to 30 seconds of speaking per translation, so you get to speak in sentences rather than short statements. Just choose the language you will be speaking in, the language you need to translate to, and hold down a button to talk. Our multi-language translator supports up to 74 languages including Arabic, Chinese, English, French, German, Hindi, Italian, Japanese, Korean, Polish, Portuguese, Russian, Spanish, Thai, Turkish, Vietnamese, and many more. No matter where you travel, rely on Pocketalk to break down language barriers.Instead of signing up for an expensive mobile carrier plan or hunting down a wireless hotspot, Pocketalk comes with built-in data, meaning no wifi is needed in order to use it. Additionally, our device is designed with portability in mind. While Pocketalk is small enough to fit in your pocket, its capabilities are unmatched. Equipped with Bluetooth compatibilities, powerful dual speakers and noise-cancelling dual microphones, Pocketalk will pick up every word you speak, even in the busiest of cities or crowded cafes. The large touch-screen makes Pocketalk simple to use and offers users a speech to text display of conversations. Its simple and intuitive interface, adjusting the volume, brightness, and settings is just a few taps away. With a full seven hours of usage or up to ten days in sleep mode, Pocketalk has a long reliable battery life.
Show More

Desertcart is the best online shopping platform where you can buy Pocketalk Language Translator Device Portable Two Way Voice Interpreter 82 Language Smart Translations In Real Time Black from renowned brand(s). Desertcart delivers the most unique and largest selection of products from across the world especially from the US, UK and India at best prices and the fastest delivery time.

Yes, it is absolutely safe to buy Pocketalk Language Translator Device Portable Two Way Voice Interpreter 82 Language Smart Translations In Real Time Black from Desertcart, which is a 100% legitimate site operating in 164 countries. Since 2014, Desertcart has been delivering a wide range of products to customers and fulfilling their desires. You will find several positive reviews by Desertcart customers on portals like Trustpilot, etc. The website uses an HTTPS system to safeguard all customers and protect financial details and transactions done online. The company uses the latest upgraded technologies and software systems to ensure a fair and safe shopping experience for all customers. Your details are highly secure and guarded by the company using encryption and other latest softwares and technologies.