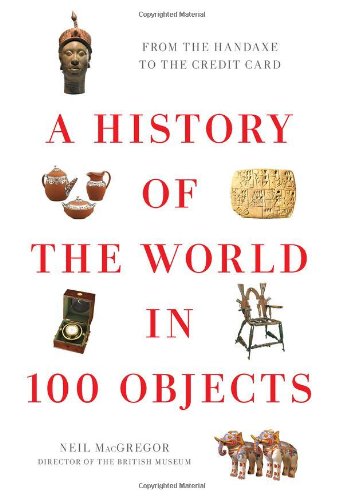 A History of the World in 100 Objects

Best Books of the Month, November 2011 ( http://www..com/gp/feature.html?docId=1000741041 ): In A History
of the World in 100 Objects, Neal MacGregor, director of the British Museum, takes readers on a tour of the world by way
of its material goods. From everyday items such as pots, utensils, and money to valuables such as art and jewelry,
MacGregor shows that the things humans have left behind are often as rich and informative as written texts. Whether it’s
a strange and unique object like a throne made of rifles from Mozambique or a medieval German crystal, or a familiar one
like a sculpture of the head of Augustus or Hokusai's painting The Great Wave, MacGregor skillfully weaves each one into
the fabric of the society that it came from. In that sense, the book is much more than a museum catalog: it's a hundred
keyhole views into a hundred different societies from around the world and throughout history.

Praise for A History of the World in 100 Objects:

“A beautiful and absorbing book, a visual history of humanity . . . filled with equally fascinating objects, some
famous, some not, nearly all of them intimate, telling and strange.”
—Dwight Garner, The New York Times

“Spotlighting artworks, artifacts and documents from the British Museum’s vast collections, Neil MacGregor—the museum’s
director—brilliantly elucidates and connects items ranging from Zhou Dynasty bronze vessels to Victorian tea sets, from
the Rosetta Stone to etchings by David Hockney, from pieces of eight to the modern credit card. Traversing continents,
cultures and epochs with perfect aplomb, it is ultimately a defense of why the universal museum remains a vital
institution in today's world. This is an enthralling and profoundly humane book that every civilized person should
read.”
—Jonathan Lopez, Wall Street Journal

“A brave and original undertaking . . . Each of the sections has something interesting to say, and prior knowledge of a
given topic does not prevent us from gathering new insights from the text and the illustrations, and new angles of
vision. Some of the images scattered through the book are so astonishing and so far from our usual perceptions that I
don’t think I will ever forget them. . . . MacGregor writes with energy and flair, and this is an entertaining and
informative book.”
—Jonathan Spence, The New York Review of Books

“Arresting . . . This beautifully illustrated book demonstrates how much we can learn about past societies from the
things they have left behind. British Museum director MacGregor provides insightful commentaries on each of the objects
in an appealing, conversational style. . . . A book to savor, full of information and surprises.”—Kirkus Reviews

“MacGregor has done more to capture the magic and importance of history than any number of academic monographs. We are
swept from Africa 2 million years ago to the dawn of the 21st century on a whistle-stop tour that avoids most of the
obvious destinations but still feels enormously satisfying.”—Sunday Times, History book of the Year

“Bound to be a popular present this Christmas . . . Everyone knows about the sculptures from the Parthenon. . . . but I
was amazed by the boggle-eyed monster carved into the base of a wooden stool that once belonged to a chieftain of the
largely forgotten Taino people of the Caribbean, who gave us words such as hurricane, barbecue, hammock and tobacco . .
. Erudite and entertaining, monumental yet relaxed.”

—The Telegraph, Best book of the Year

“The most enlightening book of recent times.”
—The Independent

“Wonderful . . . The swirl and sweep of his story transports us to every corner of the globe, and illustrates how
different cultures have always communicated, traded, and fought with one another.”
—Tom Holland, The Observer

“The style is authentic, personal and humorous. MacGregor demonstrates the power of objects to recover the place in
history of lost civilisations.”
—Andrew Roberts, Financial Times

“None could have imagined quite how the radio series would permeate the national consciousness. Well over 12.5 million
podcasts have been downloaded since the first programme and more than 550 museums around Britain have launched similar
series featuring local history. . . . MacGregor’s voice comes through as distinctively as it did on radio and his
arguments about the interconnectedness of disparate societies through the ages are all the stronger for the detail
afforded by extra space. A book to savour and start over.”
—The Economist

Shop the largest choice of Arts And Photography online in the UAE. Browse thousands of great deals on neil macgregor products with fast, free delivery.