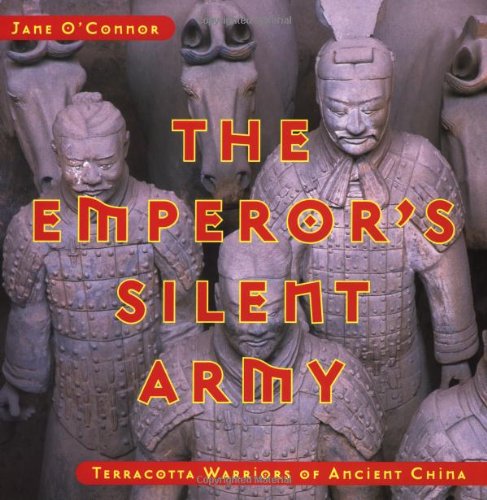 From School Library Journal --------------------------- Grade 4-6-When three farmers, digging a well in a field near Xi'an, China, unearthed a pottery head, they were completely unaware of the magnitude of their discovery. As archaeologists began to excavate the site, they found an entire army of life-sized pottery soldiers of every rank, horses, chariots, weapons-an army fit for an emperor. In lively fashion, this handsome book recounts the story of China's first emperor, Qin Shihuang, who ordered the army's construction to ensure that he remain safe and powerful if his quest for unending life was unsuccessful. As the excellent colorful photographs make clear, none of the soldiers look alike. Their costumes reflect their rank, and their faces probably resemble the people with whom the many potters were acquainted. O'Connor also speculates on the contents of the Emperor's tomb, which at present has not been excavated. Like Caroline Lazo in her somewhat longer book The Terra Cotta Army of Emperor Qin (Macmillan, 1993), O'Connor has done a credible job in telling the story of this important archaeological treasure. An essay about her research process is included, but specific references and footnotes are missing. One can also quibble with some minor points-why, for example, does she refer to these life-sized statues as "figurines," and why does she say nothing about why China has chosen to leave Qin's tomb unexcavated? Still, this book provides an intriguing glimpse at one of China's greatest treasures and at one of its most famous emperors. Barbara Scotto, Michael Driscoll School, Brookline, MA Copyright 2002 Reed Business Information, Inc. Read more ( javascript:void(0) ) About the Author ---------------- Jane O'Connor lives in New York City. Read more ( javascript:void(0) )
Show More
Reviews