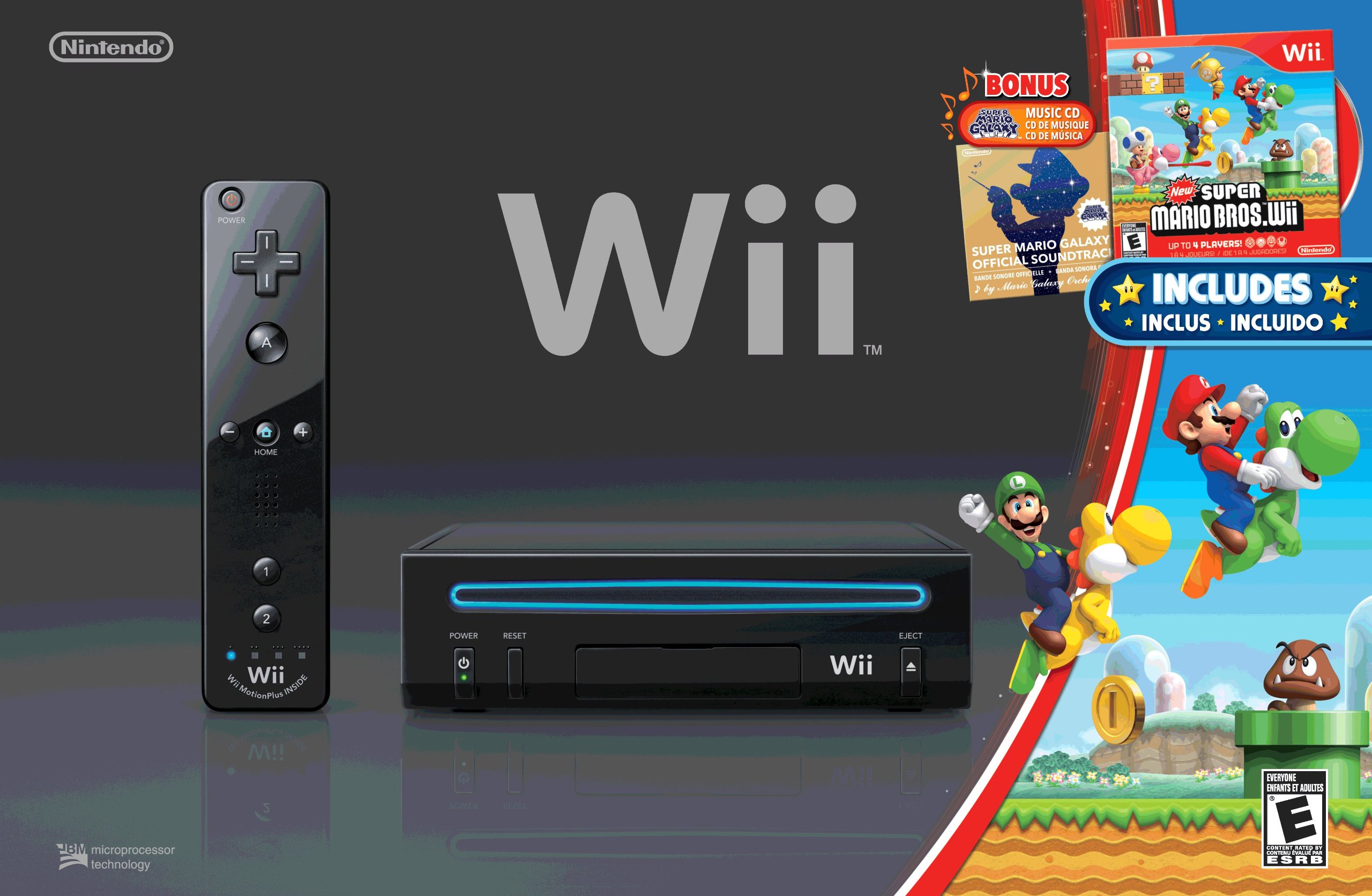 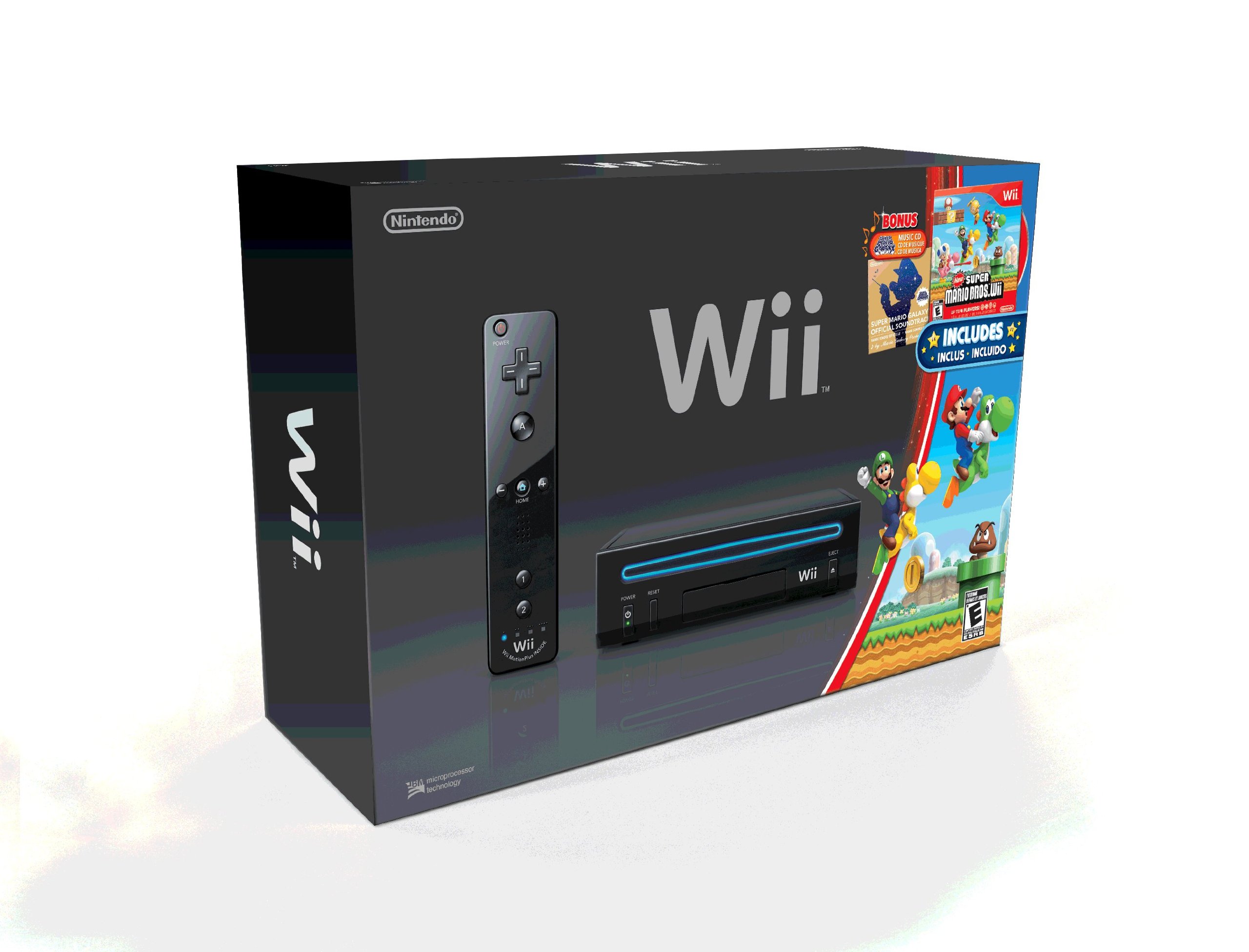 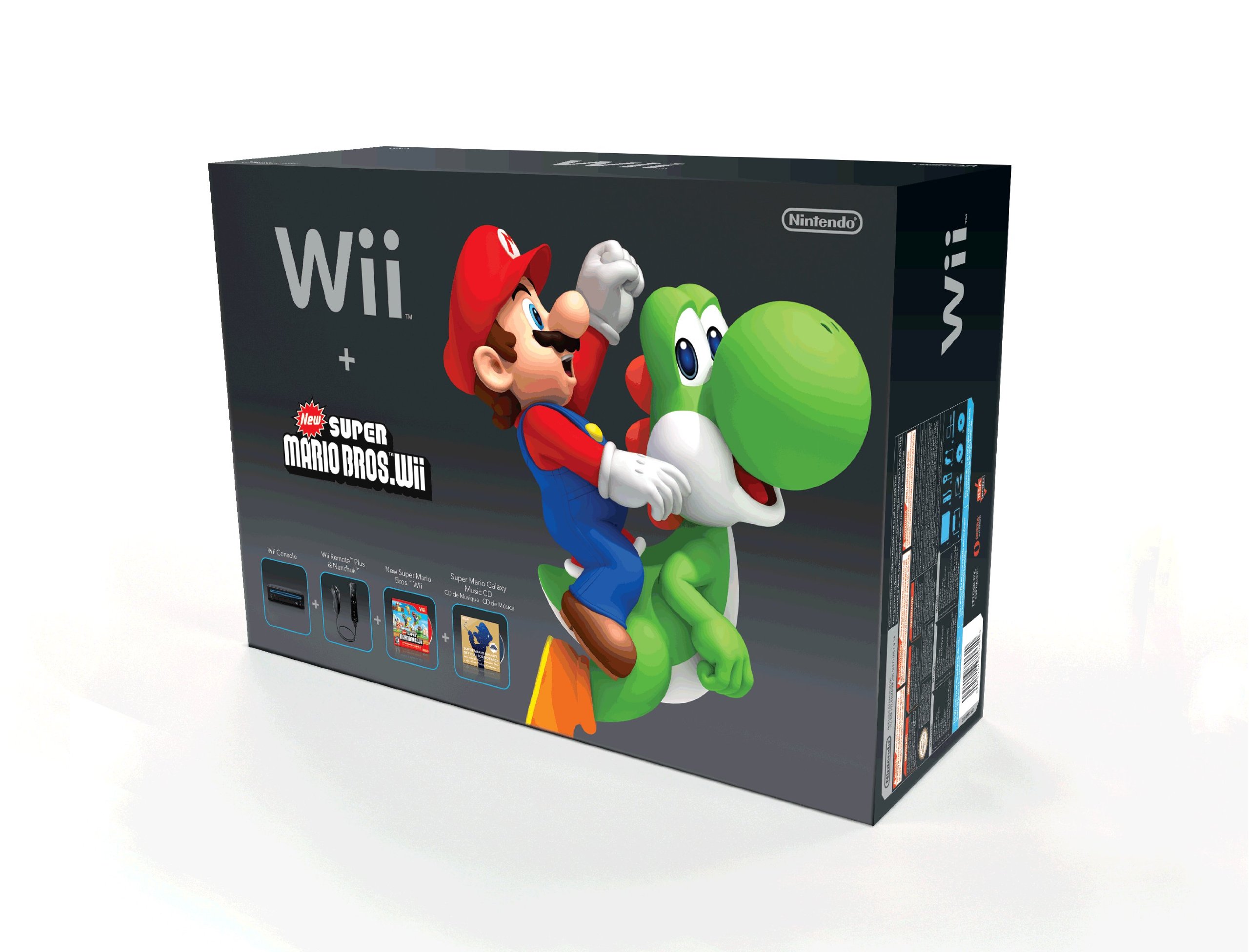 Includes Black Wii Console, Black Wii Remote Plus, Black Nunchuk, New Super Mario Bros. Wii game pack and Super Mario
Galaxy Official Soundtrack. New Super Mario Bros. Wii: A classic Mario adventure that everyone can enjoy. This Side
scrolling Platformer for 1-4 players has a game rating of "E" with Comic Mischief. Language is English, Spanish and
French. Mario has made a mighty leap out into the galaxy. We've also made the leap to full surround orchestration for
the music that paints the backdrop to Mario games. Much as a multitude of stars come together to create a galaxy, many
musicians have come together to create music to fill your hearts.

Console-based video gaming is one of the most popular of modern digital technologies, cutting across age, demographic
and gender divides. Today's players have three dominant platforms to choose from: Nintendo Wii, PlayStation 3, and Xbox
360 by Microsoft. Each is an impressive multifunctional device, with designs meant to encourage integration into
existing home entertainment systems and networks, but each goes about this in different ways. Taking a few minutes to
examine the main features, and getting more familiar with available options, accessories and possible limitations of
each console is the optimal way to determine which is the best choice for the players in a household.

There is not just one kind of console video game, and so the machines that are are used to play them are different as
well. Considering the types of games to be played, their availability for the consoles being considered and the ability
of those consoles' to present the best gaming experience possible for the game's genre and content is important. The
games developed for Wii tend to be more easily accessible, family-friendly productions heavily influenced by Nintendo's
classic gaming history. Filled with cartoon-like and childlike characters as well as Arcade-style gameplay situations,
Wii games are often referred to as "Casual Games," or "Party Games" typified by brief, simple "mini-games." These small
games-within-games are tailor-made for players new to the puzzle-solving aspects of gaming and how that is translated
through game controllers to the screen by the player.

PlayStation 3 and Xbox 360 consoles are the current version of earlier console releases whose user bases were rooted
in game genres such as Action-Adventure, Shooters, Racing, Sports, Role-playing games (RPG) and so on. Gameplay
developed in these genres tends to require more focus on the part of the player, and more graphics processing power from
the console in order to maintain a quality experience. That is what continues to be the main focus of the PlayStation 3
and Xbox 360. Capable of full 1080p HD quality graphics presentation when used with the proper cables and displays, in
this area Xbox 360 and PS3 are far beyond what Wii is capable of. Iconic game franchises like Halo, God of War, Fable,
Metal Gear Solid, Gears of War, Killzone, Mass Effect, The Elder Scrolls and many others have grown up on these
platforms, feeding off of their power. And with the rise of online multiplayer gaming through Xbox LIVE and PSN the high
energy, fine graphical specialties of these platforms only continues to grow.

Although motion gaming has been front and center since the launch of the Wii in 2006, the other two consoles have
their own motion gaming offerings that provide unique play opportunities on their respective platforms that have also
found a wide audience. See a breakdown of the motion gaming capacity of each of the systems below.

The Wii Remote Plus controller is the standard wireless controller that ships with each Wii. It combines the intuitive
motion controls of the original Wii Remote with the precision technology of the Wii MotionPlus accessory, all built-in
to a single unit. The device is handled in a wand-like fashion, and uses internal gyroscope and accelerometer technology
to pinpoint the players movements and physical positioning which it then relates into a game via a sensor bar connected
to the console. The Wii Remote Plus has only a few buttons making it easy to use. It also contains a speaker, a rumble
feature, and an external connector for other input devices like the Nunchuk controller and the Classic Controller.

Easy to use and fun for everyone, Kinect sensor for Xbox 360 utilizes revolutionary full-body tracking to put players
in the center of the fun that is 100% controller-free. After configuring itself by registering a range of points across
your body, this amazing technology allows Kinect to recognize and mirror your movements in the game, in effect making
your body the controller. The sensor is compatible with every Xbox 360, features a color VGA motion camera (640 x 480
pixel resolution @ 30 frames per second), a depth camera (640 x 480 pixel resolution @ 30 frames per second) and an
array of 4 microphones supporting single speaker voice recognition.

Online functionality is a major focus in console gaming. Each of the three consoles can be used offline, but by
integrating them into your home broadband connection you can greatly expand their potential. Each posses a significant
online component, but differ in the ways users can interact with it.

WiiWare is a service that allows Wii players to download games and applications directly to their Wii console in
exchange for purchased Wii Points on the Wii Shop Channel. Online gameplay requires a code to play. It's free to play
and there are no names, so kids are protected against unwanted contact. Through Wii's online component players can also
gain access to hundreds of classic arcade games available for download through Wii's Virtual Console functionality. The
Nintendo Channel allows players to watch gameplay videos, trailers, developer interviews, and even download Nintendo DS
game demos wirelessly. Additional Wii online functionality includes a web browser and connectivity with Netflix,* which
allows users to stream video efficiently and quietly by means of the console's low energy consumption internal
processing.

PlayStation Network is an all access pass not only to a world of gaming, but also one of entertainment at-large. The
service is 100% free, only requiring a PS3 (or PlayStation handheld) and a broadband connection to the Internet. Once
you are in visit the PlayStation Store where users can download games, previews, DLC add-ons for games, game demos, game
extras, music and streaming video. Purchases can be made using a credit card or a PlayStation Network Card purchased
offline. Content can be stored on your console or external media. Online multiplayer gameplay through PSN is simple, yet
robust. Simply slip a compatible multiplayer disc into the console, select the multiplayer option and set up your own
game or wait to join one in progress. The service also contains Netflix access,* a range of original gaming-oriented
video programming, as well as access to PlayStation Home, a 3D world where gamers can interact in a virtual environment.

Xbox LIVE is the online entertainment hub for Xbox 360. The service was launched with the original Xbox console in
2002, and has evolved and grown with Xbox 360. The service is two-tiered, with every user receiving a free "Silver
membership," which allows for access to content such as free game demos, downloaded video rentals, Xbox LIVE avatar
functionality and chat. A paid "Gold Membership" provides access to these and expanded features, including online
gaming, HD movies and TV shows through services such as Netflix,* HBO Go,** ESPN, and Hulu Plus, downloadable games,
facebook, downloadable content (DLC) for games and more. Players use Xbox LIVE points, which as easily purchased online
and offline to access much of the online content. Both Xbox LIVE membership levels allow players to increase their Gamer
Score, a running tally of the achievements they have unlocked in games. This is commonly shared information among gamers
around the world and a source of pride in the community.

Shop the largest choice of Wii online in the UAE. Browse thousands of great deals on by nintendo products with fast, free delivery.