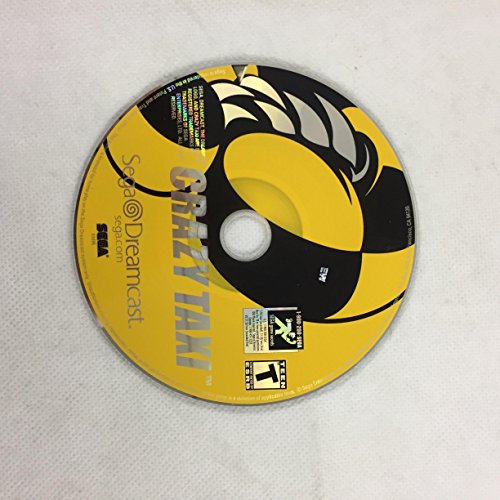 If you think it's hard to flag down a cab in a big city, try driving one in Sega's zany
straight-from-the-arcade port of Crazy Taxi. If you're one of the teeming fans who eagerly played Crazy Taxi in the
arcade at a buck a pop, then this game is a must-buy, if only from a purely economic standpoint. Even those who don't
know the difference between Crazy Taxi and the long-running TV series Taxi will immediately recognize the appeal of
this game. In fact, this game is so impressive and addictive that it should easily convince a whole new wave of buyers
to purchase a Sega Dreamcast.

What's so hot about Crazy Taxi? For starters, the graphics sport the most impressive re-creation of a living city ever
seen in a video game. The level of detail is astounding and never ceases to surprise the player as block after unique
block speeds by. The city is a distilled version of San Francisco with some landmarks and neighborhoods left intact.
Making it seem all the more real are apparent product placements of real-world retail locations such as KFC, Tower
Records, and Pizza Hut. And just about everything you see on the screen is interactive: boxes, phone booths, and
mailboxes topple when bumped or smashed, pedestrians leap and tumble out of your path, and the myriad of traffic
attempts to avoid your erratic high-speed antics. While some driving games brag about a lack of boundaries, this one
delivers--players drive on the ocean floor, off the second floor of a parking garage, through parks, and down stairs. A
helpful hovering arrow points drivers in the correct direction, but you can truly drive wherever you want at any time,
making for tons of replay value.

While the game is a direct port from the arcade game of the same name, there's plenty more depth in the home version.
In addition to the city that appears in the coin-op version, the Dreamcast version also includes an entirely new city.
Crazy Taxi includes a trunk-load of mini-games that help to teach drivers how to perform the special speed boosts and
maneuvers in the game.

Though this game would be plenty exciting without any sounds at all, it has an adrenaline-pumping soundtrack supplied
by punk crossover bands the Offspring and Bad Religion, as well as some good, if sometimes monotonous, dialogue between
the driver and the passengers. --Jeff Young

* Wonderful, realistic graphics
* Easy to get into, and full of many long hours of addictive play
* Even more to offer than the fantastic arcade game upon which this is based
Cons: * On very few occasions players will encounter some graphic slowdown

Shop the largest choice of Sega Dreamcast online in the UAE. Browse thousands of great deals on sega products with fast, free delivery.