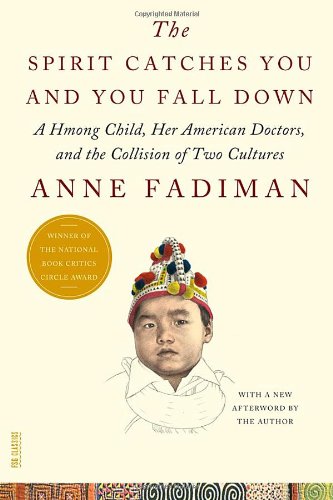 The Spirit Catches You and You Fall Down: A Hmong Child, Her American Doctors, and the Collision of Two Cultures (FSG Classics) by Anne Fadiman (2012-04-24)

“This is a book that should be deeply disturbing to anyone who has given so much as a moment's thought to the state of
American medicine. But it is much more . . . People are presented as [Fadiman] saw them, in their humility and their
frailty--and their nobility.” ―Sherwin B. Nuland, The New Republic

“The Spirit Catches You and You Fall Down changed how doctors see themselves and how they see their patients. Anne
Fadiman celebrates the complexity and the individuality of the human interactions that make up the practice of medicine
while simultaneously pointing out directions for change and breaking readers' hearts with the tragedies of cultural
displacement, medical limitations, and futile good intentions.” ―Perri Klass, M.D., author of A Not Entirely Benign
Procedure

Anne Fadiman was born in New York City and raised in Connecticut and Los Angeles. After graduating from Harvard, she
worked as a wilderness instructor in Wyoming before returning to New York to write. She has been a staff writer at Life,
editor-at-large of Civilization, and editor of The American Scholar. Fadiman is also the author of two collections of
personal essays, Ex Libris and At Large and At Small, as well as the editor of Rereadings and Best American Essays 2003.
She is married to the writer George Howe Colt. Fadiman lives with her family in western Massachusetts and serves as the
Francis Writer-in-Residence at Yale.

Shop the largest choice of Books online in the UAE. Browse thousands of great deals on Anne Fadiman products with fast, free delivery.