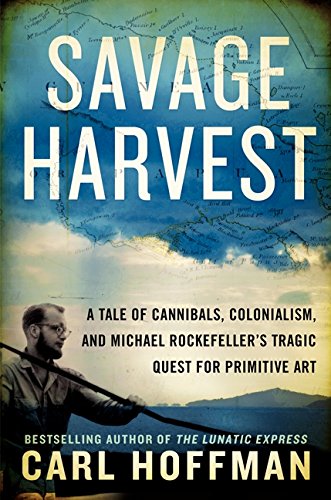 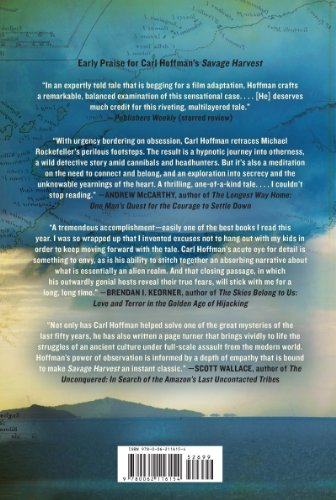 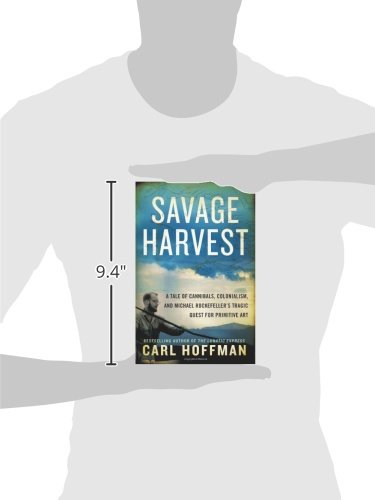 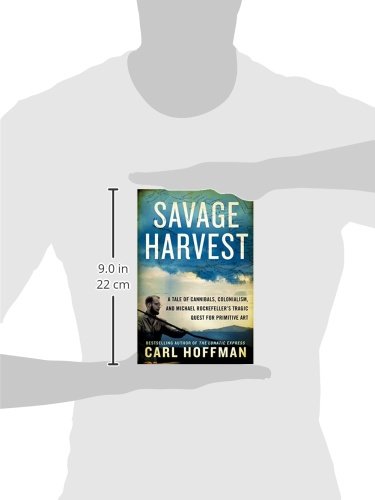 An Best Book of the Month, March 2014: “I think I can make it.” In 1961, while on an expedition to collect pieces for
his father’s Museum of Primitive Art, Michael Rockefeller and his traveling companion were plunged into the warm waters
off New Guinea. The billionaire scion tied two empty gas cans to his body for floatation and swam for shore, and by most
accounts, he made it. But what happened there, when he encountered members of the Asmat tribe--a culture marked by
ritual violence and cannibalism--has been long debated. Did he disappear into the tropical jungles, or was he rendered
and eaten by the tribesmen, as many speculated and the Rockefeller family long denied? Award-winning journalist Carl
Hoffman has stepped into Rockefeller’s boot prints and Asmat society, interviewing generations of warriors in an
exhaustive and engrossing attempt to solve the mystery. The result, Savage Harvest, succeeds not only as a captivating
and sensational puzzle, but also as a (seemingly unlikely) modern adventure and a fascinating glimpse of an
anachronistic people pulled into the 20th century by the tensions of global politics. So, did he make it? The title
might offer a clue. --Jon Foro

Carl Hoffman, who with his 2010 book The Lunatic Express demonstrated himself to be a traveler of the greatest courage
and determination, as well as a writer of skill, has now made a significant contribution to history. Savage Harvest, a
narrative that is as exciting as it is instructive, appears finally to have winnowed the truth from the mare’s nest of
legend and wishful thinking surrounding the disappearance in November 1961, of Michael Rockefeller, in a remote region
of southwestern New Guinea.The 23-year old, along with a Dutch anthropologist colleague and two young guides, were
sailing in a dugout catamaran some three miles from the coast of Asmat. The craft overturned; the two locals swam for
help, but as the wreck drifted farther from land an impatient Rockefeller decided to try and make it alone. With two
fuel cans to help his buoyancy on what he reckoned would be a twenty-hour swim, he slid into the warm shallows of the
Arafura Sea - never to be seen by friends or family again.Did he drown? Was he eaten by a shark? Did he vanish into the
jungle, Kurtz-like? Or was he the victim of cannibalism at the hands of coastal villagers? Hoffman has shown that with
assiduous tradecraft, hard work and near-obsessive tenacity, it is possible to know, to solve the supposedly insoluble.
He has journeyed, twice now, deep into the dark interiors of Asmat, and has conducted interviews and learned the
language and listened to sensible men and women – in New Guinea, in the Netherlands, in the anthropology departments of
knowledgeable universities. And he has used a severe intelligence to determine just what happened on that warm dawn
Monday, November 20, 1961.The Rockefellers – not least Michael’s twin sister Mary, who produced her own book two years
ago – may not want to believe this tale; and the family did nothing to help Hoffman in his admirable quest. But the
truth, as this book chronicles in patient, meticulous detail, has a way of eking itself out. Savage Harvest is a
remarkable testament to the revealed truth, and of its revealing - even if that truth is wholly bizarre and, to most,
quite literally unpalatable.

Simon Winchester is the acclaimed author most recently of The Men Who United the States as well as Atlantic, The
Professor and the Madman, The Man Who Loved China, A Crack in the Edge of the World, and Krakatoa, all of which were New
York Times bestsellers. In 2006 Mr. Winchester was made an officer of the Order of the British Empire (OBE) by Her
Majesty the Queen. He resides in western Massachusetts.

*Starred Review* Award-winning travel writer Hoffman’s (The Lunatic Express, 2010) penchant for extremes
fueled his demanding quest for the truth about Michael Rockefeller’s disappearance in New Guinea in 1961. Freshly
graduated from Harvard and eager to emulate his art collector father, Nelson Rockefeller, then governor of New York,
Michael became enthralled with the Asmat’s extraordinary wood carvings and was dashing from village to village, buying
as many pieces as he could find, when his boat capsized in rough seas. Death by drowning was the official finding, but
rumors of a far more horrific fate persisted. After arduous sojourns among the enigmatic Asmat, Hoffman came to
understand how their ancient cosmology was enacted through “reciprocal violence,” headhunting, and cannibalism. He also
realized just how risky Rockefeller’s buying spree was, given the bloody conflicts raging between the Asmat and the
Dutch colonial authorities, and how little the novice collector knew about the spiritual significance of the art he was
acquiring, including monumental works on display in the Metropolitan Museum of Art. By dint of grueling fieldwork,
startling archival discoveries, revelatory visits with a Dutch missionary relieved to break his 50-year silence,
profound insights, and muscular writing, Hoffman tells the unforgettable story of a soothing and politically expedient
cover-up and a brutal and tragic collision of cultures. --Donna Seaman

Shop the largest choice of Politics And Social Sciences online in the UAE. Browse thousands of great deals on carl hoffman products with fast, free delivery.