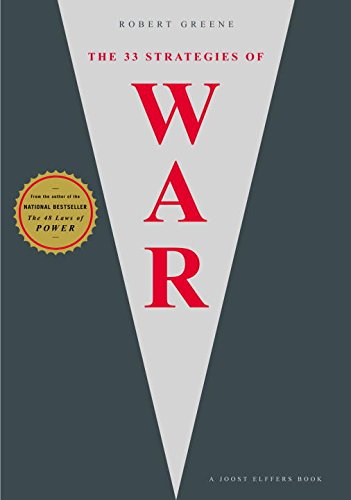 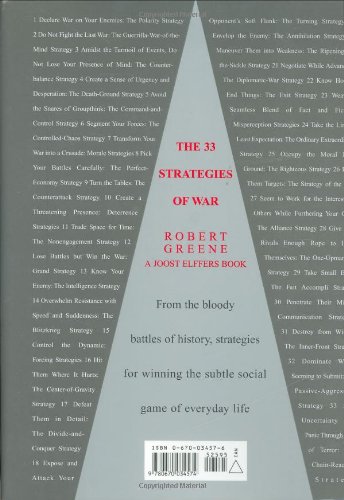 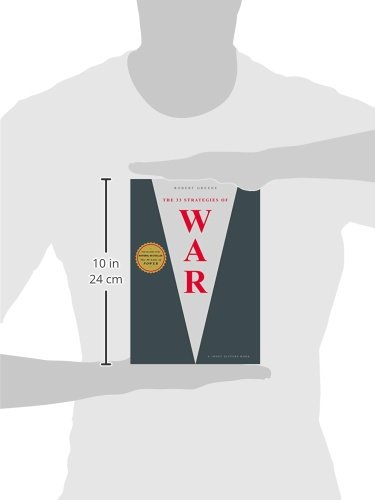 As in his bestselling The 48 Laws of Power, Greene puts a modern spin on wisdom that has stood the test of
history, only this time his role model is Sun Tzu rather than Machiavelli. The argument is fairly standard: despite our
most noble intentions, "aggressive impulses that are impossible to ignore or repress" make military combat a fitting
metaphor for getting ahead in life. Greene's advice covers everything from steeling one's mind for battle to specific
defensive and offensive tactics—notably, the final section on "dirty" warfare is one of the book's longest. Historical
lessons are outlined and interpreted, with amplifying quotations crammed into the margins. Not all of the examples are
drawn from the battlefield; in one section, Greene skips nimbly from Lyndon Johnson's tenacity to Julius Caesar's
decisiveness, from Joan Crawford's refusal to compromise to Ted Williams's competitive drive. Alfred Hitchcock, he says,
embodies "the detached-Buddha tactic" of appearing uninvolved while remaining in total control. The diversity of subject
matter compensates for occasional lapses into stilted warriorese ("arm yourself with prudence, and never completely lay
down your arms, not even for friends"). For those willing to embrace its martial conceit, Greene's compendium offers
inspiration and entertainment in equal measure. (Jan. 23)
Copyright © Reed Business Information, a division of Reed Elsevier Inc. All rights reserved.

Greene and "producer" Joost Elffers are the Machiavellians who brought us The 48 Laws of Power (1998) and
The Art of Seduction (2001), and their latest book similarly purports to distill the profundities of history for
personal gain. Unapologetically premised on Hobbesian "all that is social is war" bromides, this account collects
parables of strategic success and error from a diverse cast of military and nonmilitary historical figures. Its lessons
are presented self-help-book style in chapters titled "Maneuver Them into Weakness" and "Seem to Work for the Interests
of Others While Furthering Your Own" and flanked by a withering barrage of reiterative marginalia. Most books this
cynical (and this repetitive) need a sense of humor to be readable, something this book apparently lacks. Its
quasi-spiritual tone, though perhaps increasing its attractiveness to the impressionable, is also trying at times. But
those readers who push through to the end (or flip ahead) will find a curiously contemporary section on modern terrorism
cloaking a surprisingly specific commentary on al-Qaeda and antiterrorism strategy. Politics by other means? Brendan
Driscoll
Copyright © American Library Association. All rights reserved

Shop the largest choice of Business And Money online in the UAE. Browse thousands of great deals on robert greene products with fast, free delivery.