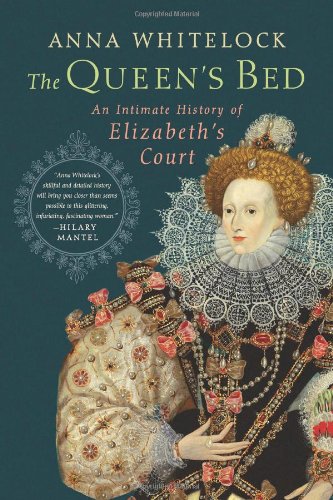 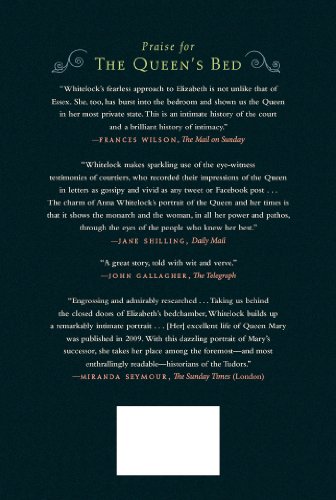 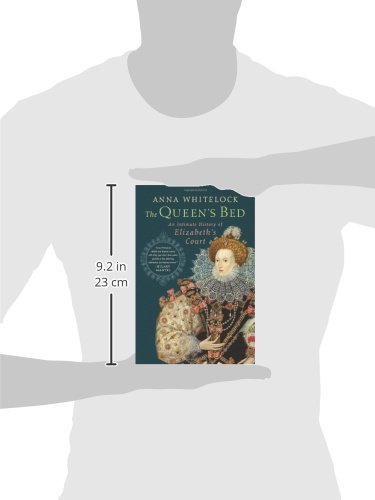 Whitelock delves deep into the court of Queen Elizabeth I—in fact, into the monarch’s very bedchamber,
where she examines the lives, the roles, and the influence of her most favored ladies-in-waiting. Culled from the
aristocracy and much more than glorified servants, these women bathed, clothed, and often shared a bed with the queen.
In doing so, they bore witness to the political rivalries, social gambits, and personal scandals that perpetually
surrounded Elizabeth. Charged with pampering and protecting the queen’s body, they also zealously guarded her
secrets—often with very little thanks or consideration—in the fishbowl environment of the Elizabethan court. This
intimate history of Elizabeth’s boudoir and the women who populated it approaches a popular biographical subject from an
entirely fresh angle, providing an enlightening peek into her private persona. --Margaret Flanagan

“Unquestionably [Elizabeth] is one of the most powerful women to have ever lived. So is it any wonder that this
brilliant, vain, temperamental, wily woman still fascinates centuries later?. . . Elizabethan England was a ribald
wondrous realm ruled by an extraordinary woman and Anna Whitelock brings it vividly to life in The Queen's Bed.” ―Robert
Collison, Toronto Star

“As Anna Whitelock's The Queen's Bed proves, there is still a new and fascinating vantage from which to consider
Elizabeth I. . .” ―Kathryn Harrison, New York Times Book Review

“[The Queen's Bed] is filled with fascinating details of life at her court, with eyewitness accounts from diaries,
letters and pamphlets. . . a trove of interesting facts.” ―Moira Hodgson, Wall Street Journal

“Densely erudite, intriguing take on Queen Elizabeth I's very public private life. . .Especially striking is the
author's chronicle of Elizabeth's relationships over the course of her long reign; she was never alone, and she had
several (probably consummated) love affairs or infatuations, most notably with her beloved Lord Robert Dudley. . .
Whitelock's deep reading into the primary sources of this period proves wonderfully satisfying. This chockablock,
scholarly portrait invites further interest in this endlessly alluring queen.” ―Kirkus Reviews

“This intimate portrait of Elizabeth's private life, as refracted through her relationships with the ladies of her
bedchamber, will engage any readers wishing for a more balanced portrait of Elizabeth the flawed human being, as opposed
to simply another rehashing of the mythical representations of her as Gloriana.” ―Publishers Weekly

“Fascinating glimpses of Elizabeth I's life behind closed doors. . . [The Queen's Bed] is enriched by Anna Whitelock's
eye for the curious and engaging detail.” ―TLS

“Whitelock's fearless approach to Elizabeth is not unlike that of Essex. She, too, has burst into the bedroom and shown
us the Queen in her most private state. This is an intimate history of the court and a brilliant history of intimacy.”
―Frances Wilson, The Mail on Sunday

“Whitelock makes sparkling use of the eye-witness testimonies of courtiers, who recorded their impressions of the Queen
in letters as gossipy and vivid as any tweet or Facebook post . . . The charm of Anna Whitelock's portrait of the Queen
and her times is that it shows the monarch and the woman, in all her power and pathos, through the eyes of the people
who knew her best.” ―Jane Shilling, Daily Mail

“A great story, told with wit and verve.” ―John Gallagher, The Telegraph

“Engrossing and admirably researched . . . Taking us behind the closed doors of Elizabeth's bedchamber, Whitelock builds
up a remarkably intimate portrait . . . [Her] excellent life of Queen Mary was published in 2009. With this dazzling
portrait of Mary's successor, she takes her place among the foremost--and most enthrallingly readable--historians of the
Tudors.” ―Miranda Seymour , The Sunday Times (London)

Shop the largest choice of Biographies And Memoirs online in the UAE. Browse thousands of great deals on anna whitelock products with fast, free delivery.