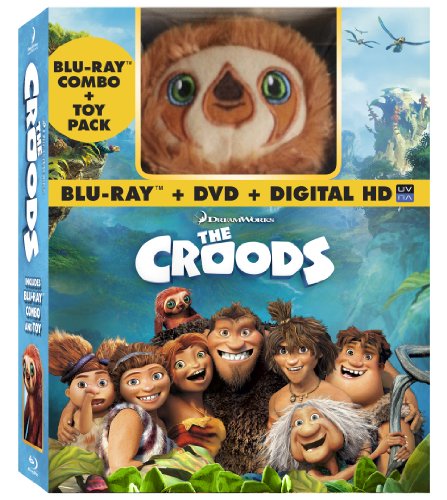 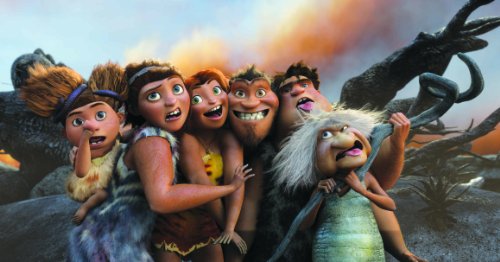 Take your favorite prehistoric pal with you wherever you go when you buy Belt's Buddy Pack — includes The Croods on
Blu-ray plus an exclusive Belt toy Limited time only, while supplies last.

Grug: The hardest working father in history. For Grug, there are no weekends, holidays or sick days. Like most dads,
Grug is fiercely protective of his family, and his hyper-vigilance is defined by his “fear is good; change is bad”
philosophy. But in order to keep his family truly safe, Grug must learn the difference between surviving and living.

Ugga: Grug’s mate. She’s every bit as solid and sure as Grug, but over their many years of raising their children
together, Ugga has always deferred to her husband’s authority. When she suddenly finds herself in the position of being
a cave-wife with no cave, Ugga is forced to make the right decision for her family -- even if it means changing the way
they live.

Eep: Grug’s rebellious teenage daughter is trying to drag her family kicking and screaming into the future. Her nagging
feeling that there might be more to life outside the family cave is confirmed when the Croods embark on a journey of a
lifetime.

Thunk: Grug’s son is 6-feet, 3-inches tall, 280 pounds, and 9 years old. Thunk wants to be a great hunter like his dad,
but Thunk can’t hit the broad side of a mammoth.

Gran: Grug’s feisty mother-in-law is truly ancient, at age 45. Her twilight years haven’t diminished her irascibility,
or her instincts for survival.

Sandy: The youngest of the Croods, four-year-old Sandy is as feral and vicious as a baby wildcat. In a dangerous world
full of creatures trying to take a bite out of her, Sandy is not afraid to bite back.

Guy: A charming teenage boy who makes dazzling discoveries (like fire and shoes), Guy is a catalyst for change. His
inventive ideas ultimately expose the Croods to new possibilities... and a new world.

Macawnivore: With the body of a small tiger, an over-sized head and the colorization of a Macaw Parrot, the Macawnivore
is an imposing creature who towers over the Croods.

Crocopup: An unexpected blend of canine and crocodile, his menacing looks and razor sharp teeth mask a friendly
demeanor. Thunk makes him his pet, and names him Douglas.

Punch Monkey: Fun and charming, until they feel threatened, the Punch Monkeys aren’t easily intimidated and, as their
name suggests, pack quite a wallop.

Even breakfast is an adventure when you're the last surviving prehistoric family, and the conviction that fear keeps you
alive and curiosity will get you killed definitely drives the Crood clan. But Eep (Emma Stone), who's in many ways a
typical teenager intent on testing her boundaries and the resolve of her parents (Nicolas Cage and Catherine Keener),
yearns for more than hiding out in a dark cave all day. Eep sneaks out of the cave one night and almost gets the whole
family killed, but her path crosses with a boy named Guy (Ryan Reynolds), who it seems is destined to change everything
for the Crood family. Forced to flee their cave home after it's destroyed, the Croods reluctantly follow Guy on a
perilous journey that leads them to discover a whole new world full of breathtaking views, fascinating creatures, and
blood-stirring adventure. The animation is lush and gorgeous and the abundance of physical and slapstick humor,
especially from Nicolas Cage as Grug and Cloris Leachman as Gran, keeps the plot moving and viewers chuckling throughout
the film. What the Crood family's journey eventually reveals is twofold: that focusing on living life and following the
light is a viable alternative to hiding in the darkness and that anyone can change. (Ages 8 and older) --Tami Horiuchi