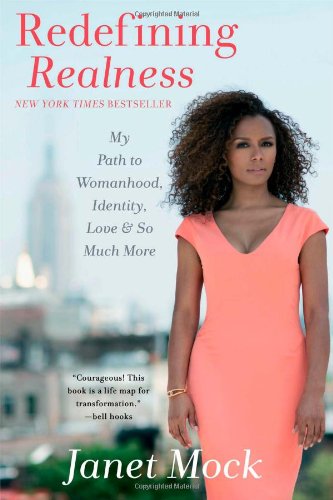 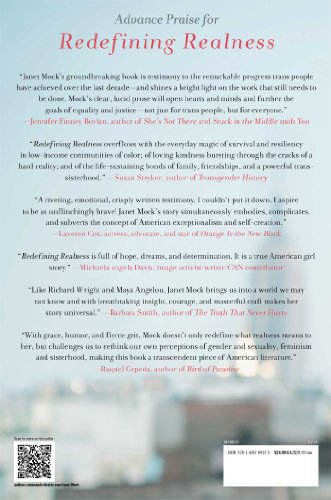 Redefining Realness: My Path to Womanhood, Identity, Love & So Much More

In 2011, Marie Claire magazine published a profile of Janet Mock in which she stepped forward for the first time as a
trans woman. Those twenty-three hundred words were life-altering for the People.com editor, turning her into an
influential and outspoken public figure and a desperately needed voice for an often voiceless community. In these pages,
she offers a bold and inspiring perspective on being young, multicultural, economically challenged, and transgender in
America.

Welcomed into the world as her parents’ firstborn son, Mock decided early on that she would be her own person—no matter
what. She struggled as the smart, determined child in a deeply loving yet ill-equipped family that lacked the money,
education, and resources necessary to help her thrive. Mock navigated her way through her teen years without parental
guidance, but luckily, with the support of a few close friends and mentors, she emerged much stronger, ready to take
on—and maybe even change—the world.

This powerful memoir follows Mock’s quest for identity, from an early, unwavering conviction about her gender to a
turbulent adolescence in Honolulu that saw her transitioning during the tender years of high school, self-medicating
with hormones at fifteen, and flying across the world alone for sex reassignment surgery at just eighteen. With
unflinching honesty, Mock uses her own experience to impart vital insight about the unique challenges and
vulnerabilities of trans youth and brave girls like herself.

Despite the hurdles, Mock received a scholarship to college and moved to New York City, where she earned a master’s
degree, enjoyed the success of an enviable career, and told no one about her past. She remained deeply guarded until she
fell for a man who called her the woman of his dreams. Love fortified her with the strength to finally tell her story,
enabling her to embody the undeniable power of testimony and become a fierce advocate for a marginalized and
misunderstood community. A profound statement of affirmation from a courageous woman, Redefining Realness provides a
whole new outlook on what it means to be a woman today, and shows as never before how to be authentic, unapologetic, and
wholly yourself.