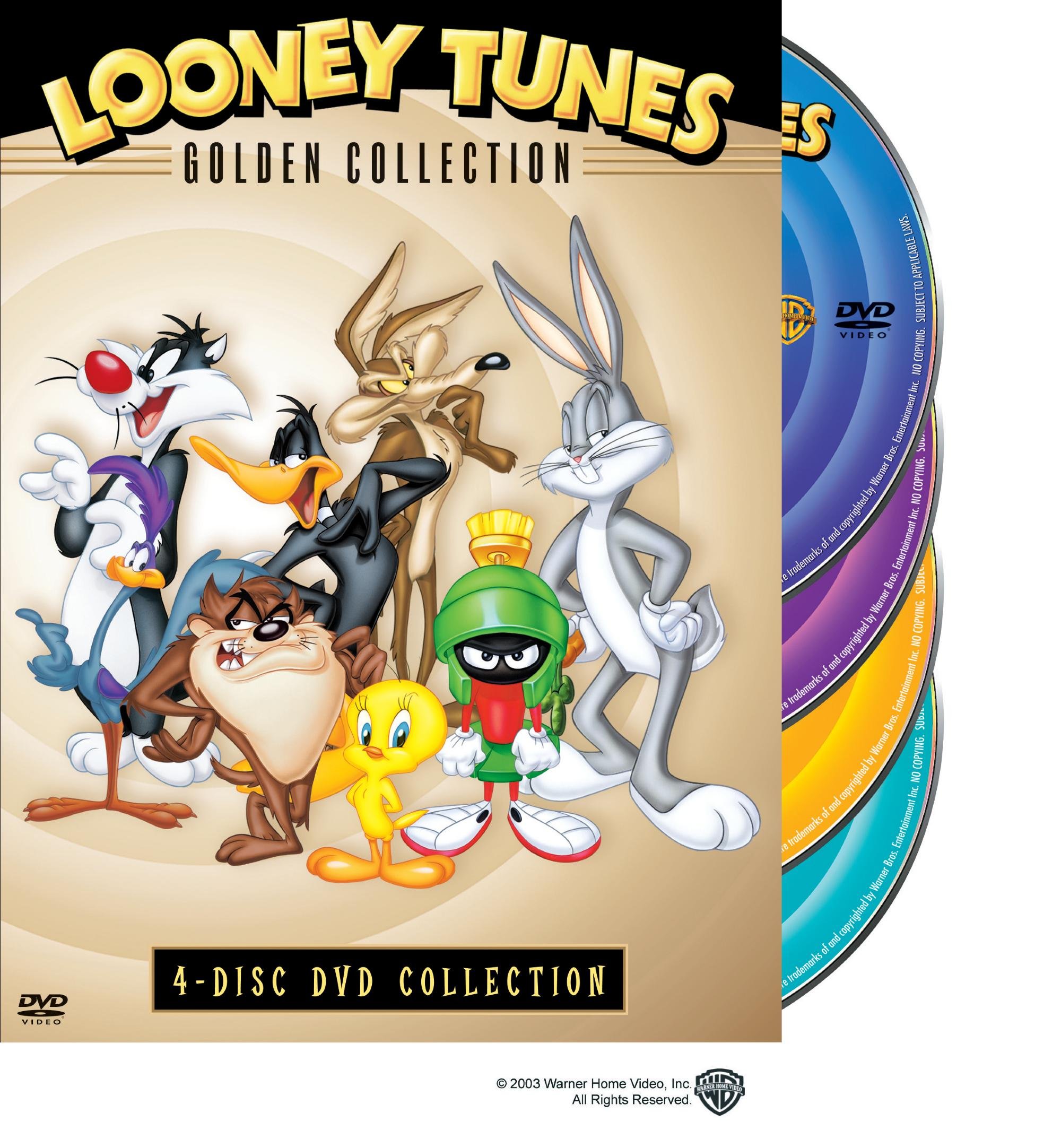 Looney Tunes: Golden Collection, The (DVD) They're the crown princes of animation. They're the international ambassadors of cartoon comedy. They're the fabulously funny friends you grew up with! And now, 56 of the very best animated shorts starring the very wackiest Warner Bros. cartoon characters have been rounded up on DVD for the first time ever in The Looney Tunes Golden Collection! Just barely contained in four special edition discs, each specially selected short has been brilliantly restored and re-mastered to its original, uncut, anvil-dropping, laughter-inducing glory! Featuring some of the very earliest, ground-breaking on-screen appearances of many all-time Looney Tunes favorites, it's an unprecedented celebration for cartoon-lovers eager to re-live the heady, hilarious, golden age of Warner Bros. animation! Sparkling with one unforgettable, landmark animated marvel after another, there's that icon of carrot-crunching aplomb, Bugs Bunny, in a dazzling assortment of his very best classic shorts. Also highlighted in their own delightfully zany series of cartoon gems: the ever-flustered Daffy Duck and eternal straight-man Porky Pig. Plus, all the rest of the beloved Looney Tunes lineup starring in some of the most wildly imaginative cartoon shorts ever created! Including an array of exclusive bonus DVD features from expert commentaries to insights into the evolution of these classic characters, this is the ultimate animated experience for anyonewho's ever thrilled to the timeless query: "Ehhh? what's up, Doc?" ]]> .com ---- For years, animation buffs have waited impatiently for the Warner Bros. cartoons to appear on DVD. The Warner shorts never commanded the budgets and prestige of the Disney and MGM films, and won fewer Oscars than they deserved. But decades after the best ones were created, they remain the quintessential Hollywood cartoons: brash, fast-paced, aggressively funny and uniquely American. Virtually everyone in the U.S. under the age of 60 grew up on these films, in theaters and on TV. The 56 cartoons in the set (out of a studio output of over 1,000) were transferred from good prints--which means the viewer can see dust, scratches, and occasional mistakes by the cel painters. The films are all presented uncut, in defiance of the killjoys who have insisted on censoring alleged "violence" in the versions shown on television. Warner Bros. is obviously testing consumer response with this set. Although the erratic selection includes many classics, purists will argue (correctly) that it offers neither a fair representation of the directors' oeuvres, nor anything approaching a coherent history of the characters or studio style. (Nearly half the films were directed by Chuck Jones; only three are by Bob Clampett, and there's nothing by Tex Avery or Frank Tashlin.) But it seems petty to carp about omissions and biases when the discs offer excellent, uncensored prints of some of the funniest films ever made in the U.S.--or anywhere else. (Rated G, suitable for all ages: cartoon violence) --Charles Solomon
Show More
Reviews