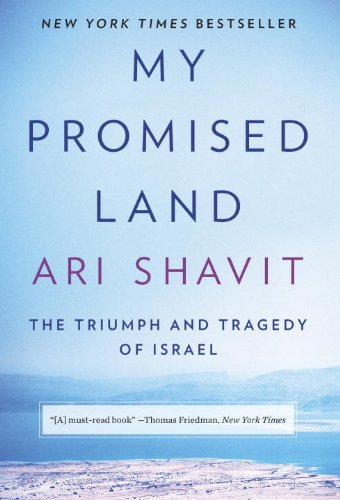 My Promised Land: The Triumph and Tragedy of Israel

An authoritative and deeply personal narrative history of the State of Israel, by one of the most influential
journalists writing about the Middle East today

Not since Thomas L. Friedman’s groundbreaking From Beirut to Jerusalem has a book captured the essence and the beating
heart of the Middle East as keenly and dynamically as My Promised Land. Facing unprecedented internal and external
pressures, Israel today is at a moment of existential crisis. Ari Shavit draws on interviews, historical documents,
private diaries, and letters, as well as his own family’s story, illuminating the pivotal moments of the Zionist century
to tell a riveting narrative that is larger than the sum of its parts: both personal and national, both deeply human and
of profound historical dimension.

We meet Shavit’s great-grandfather, a British Zionist who in 1897 visited the Holy Land on a Thomas Cook tour and
understood that it was the way of the future for his people; the idealist young farmer who bought land from his Arab
neighbor in the 1920s to grow the Jaffa oranges that would create Palestine’s booming economy; the visionary youth group
leader who, in the 1940s, transformed Masada from the neglected ruins of an extremist sect into a powerful symbol for
Zionism; the Palestinian who as a young man in 1948 was driven with his family from his home during the expulsion from
Lydda; the immigrant orphans of Europe’s Holocaust, who took on menial work and focused on raising their children to
become the leaders of the new state; the pragmatic engineer who was instrumental in developing Israel’s nuclear program
in the 1960s, in the only interview he ever gave; the zealous religious Zionists who started the settler movement in the
1970s; the dot-com entrepreneurs and young men and women behind Tel-Aviv’s booming club scene; and today’s architects of
Israel’s foreign policy with Iran, whose nuclear threat looms ominously over the tiny country.

As it examines the complexities and contradictions of the Israeli condition, My Promised Land asks difficult but
important questions: Why did Israel come to be? How did it come to be? Can Israel survive? Culminating with an analysis
of the issues and threats that Israel is currently facing, My Promised Land uses the defining events of the past to shed
new light on the present. The result is a landmark portrait of a small, vibrant country living on the edge, whose
identity and presence play a crucial role in today’s global political landscape.

Praise for My Promised Land

“[A] must-read book . . . [My Promised Land] is a real contribution to changing the conversation about Israel and
building a healthier relationship with it. Before their next 90-minute phone call, both Barack and Bibi should read
it.”—Thomas L. Friedman, The New York Times

“The most extraordinary book that I’ve read on [Israel] since Amos Elon’s book called The Israelis, and that was
published in the late sixties.”—David Remnick, on Charlie Rose

“Israel is not a proposition, it is a country. Its facticity is one of the great accomplishments of the Jews’ history.
. . . It is one of the achievements of Ari Shavit’s important and powerful book to recover [that] feeling.”—Leon
Wieseltier, The New York Times Book Review