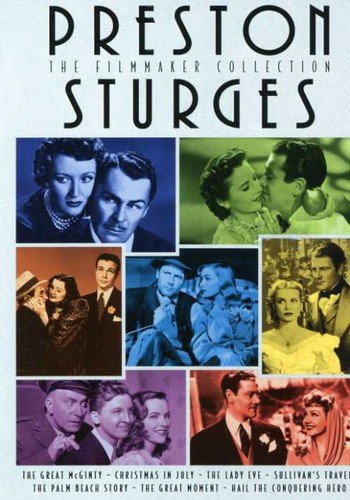 Preston Sturges was the first prominent screenwriter to direct his own script. He went on an unparalleled creative streak that brought to the screen some of the most beloved films of all time.This collection pays tribute to seven of his finest and funniest films, starring cinema's most illustrious screen stars.The Great McGintyAn opportunist (Brian Donlevy), turns corruption into a promising political career, but struggles to stay on top when he tries to go honest.Christmas in JulyHope springs eternal when an office clerk (Dick Powell) mistakenly believes he's won a coffee slogan challenge and spends the "prize money".The Lady EveIt's the ultimate battle of the sexes when a wealthy heir (Henry Fonda) falls (literally!) for a con woman (Barbara Stanwyck) with a shady past.Sullivan's TravelsIn this comedic masterpiece, a wealthy director (Joel McCrea) wants to find "real" people for his next great film (co-starring Veronica Lake).The Palm Beach StoryMoney makes the world go 'round, or so Gerry (Claudette Colbert) believes when she divorces her struggling husband (McCrea) and supports him by marrying a millionaire.The Great MomentThis stirring biopic follows the fascinating life of W.T.G. Morton (McCrea), a 19th century dentist who successfully develops the first anesthesia.Hail the Conquering HeroA quirky soldier (Eddie Bracken) gets an unexpected homecoming when a group of uproarious Marines decide to "make" a hero out of the comic misfit. Bonus Content: Disc 1 - The Great McGinty: * Theatrical Trailer Disc 2 - Christmas in July: * Theatrical Trailer Disc 3 - The Lady Eve: * Theatrical Trailer Disc 4 - Sullivan's Travels: * Theatrical Trailer Disc 5 - The Palm Beach Story: * Theatrical Trailer Disc 6 - The Great Moment: * Theatrical Trailer .com ---- Preston Sturges was a 20th-century Renaissance man who, at Paramount Pictures between 1940 and 1943, wrote and directed eight original movies unlike anything before or since. All but one were high-energy, brilliantly detailed, and very, very funny comedies that became instant classics. No one ever dreamed up a more colorful assortment of characters, wrote more lovingly textured dialogue for them, or sent them hurtling and skittering through more outrageous situations, with undertones often darker than most dramatic films. Seven of these pictures comprise this boxed set; The Miracle of Morgan's Creek is missing because it remained with Paramount when most of the studio's pre-1949 inventory was acquired decades ago by Universal/MCA. (It's on DVD via Paramount.) The omission of a single film from the cycle--and one of the very best--is regrettable, but there's plenty here to relish. Sturges was already an established playwright and screenwriter when he cajoled Paramount into letting him direct one of his own scripts. The Great McGinty won him the 1940 Oscar for best original screenplay, the raffish tale of a bum (Brian Donlevy) who ingratiates himself with the political machine of a heartland city by successfully voting 37 times in one election, then rises to become "reform" candidate for governor. The film is a glowing example of Sturges's penchant for filling the foregrounds as well as backgrounds of his movies with flavorful, mostly nameless character actors and according each of them star status, if only for one world-class line of dialogue. They and Sturges stood by one another throughout the cycle, and the result was a richness variously--and aptly--likened to Dickens or Bruegel. Christmas in July (1940) followed, a sardonic but big-hearted comedy about a young working-class couple (Dick Powell and Ellen Drew) duped into believing one topsy-turvy afternoon that they've struck it rich by winning a slogan contest. Then came the film widely regarded as Sturges's most side-splitting, The Lady Eve (1941). Barbara Stanwyck is merciless--and breathtakingly sexy--as a second-generation con artist who targets brewing heir Henry Fonda, a clueless amateur herpetologist who has spent entirely too much time up the . Then again, there are people who name Sullivan's Travels (1942) among the best films ever made. Joel McCrea plays a successful director of Hollywood comedies who decides he must make a social-consciousness allegory, O Brother Where Art Thou? His exploratory road trip disguised as a hobo, with starlet Veronica Lake for companionship, combines Hollywood satire with starkest drama verging on horror. The film is utterly unique and shatteringly powerful. The Palm Beach Story (1942), a return to screwball comedy, dances a goofy tarantella on the American obsession with wealth. There are a couple of dozen millionaires at large in this movie, every one of them insane: Robert Dudley as a comic deus-ex-machina ("the Wienie King"), a railroad club car filled with Sturges stalwarts ("the Ale and Quail Club"), and '20s crooner Rudy Vallee ascending to character-actor immortality as the devoted suitor of Joel McCrea's runaway wife, Claudette Colbert. At that point (still in 1942) Sturges embarked on his most tortuous project, Triumph over Pain, the fact-based chronicle of the Boston dentist (Joel McCrea) who discovered the use of ether for anaesthesia. Instead of being canonized, he was destroyed. Sturges, whose 1933 screenplay The Power and the Glory had anticipated the fractured time scheme of Citizen Kane by eight years, tried for even more complicated narrative-in-reverse here--and also studded the tragic story with startling bursts of slapstick humor. Paramount recut the film drastically and changed the title to The Great Moment; the fitful results would not be released till two years later. Meanwhile, Sturges scored a pair of best-screenplay Oscar nominations in 1944 for The Miracle of Morgan's Creek and Hail the Conquering Hero, two small-town comedies starring Eddie Bracken as a nebbish ill-made for heroism yet obliged by wartime circumstance to rise to the occasion. Each of these films is a comic masterpiece, each asking discomfiting questions about cherished, arguably destructive American values, yet finding its own cockeyed way to affirmation. Miracle isn't available here, but Hail the Conquering Hero casts a lingering spell, beyond satire. To quote its last line: "You got no idea." --Richard T. Jameson
Show More
Reviews