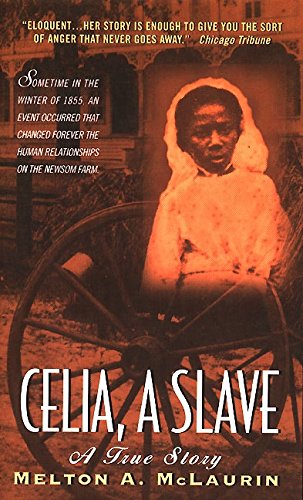 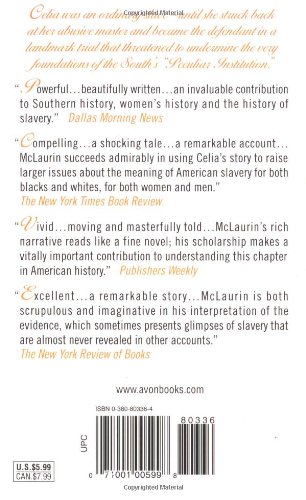 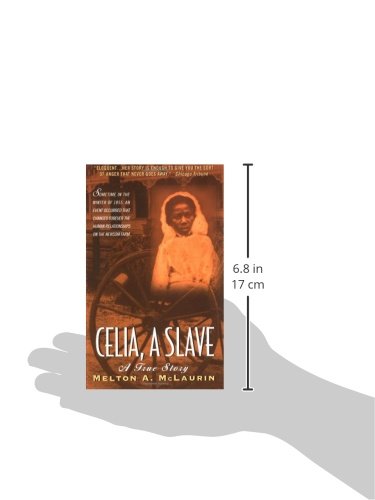 by melton a mclaurin

"Powerful...beautifully written...an invaluable contribution to Southern history, women's history and the
history of slavery."-- "Dallas Morning News""Compelling...a shocking tale...a remarkable account...McLaurin succeeds
admirably in using Celia's story to raise larger issues about the meaning of American slavery for both blacks and
whites, for both women and men."-- "The New York Times Book Review""Vivid...moving and masterfully told...McLaurin's
rich narrative reads like a fine novel; his scholarship makes a vitally important contribution to understanding this
chapter in American history."-- "Publishers Weekly""Excellent...a remarkable story...McLaurin is both scrupulous and
imaginative in his interpretation of the evidence, which sometimes presents glimpses of slavery that are almost never
revealed in other accounts."-- "The New York Review of Books""Eloquent...Her story is enough to give you the sort of
anger that never goes away."-- "Chicago Tribune"

In 1850, fourteen-year-old Celia became the property of Robert Newsom, a prosperous and respected Missouri farmer. For
the next five years, she was cruelly and repeatedly molested by her abusive master--and bore him two children in the
process. But in 1855, driven to the limits of her endurance, Celia fought back. And at the tender age of eighteen, the
desperate and frightened young black woman found herself on trial for Newsom's murder--the defendant in a landmark
courtroom battle that threatened to undermine the very foundations of the South's most cherished institution. Based on
court records, correspondences and newspaper accounts past and present, Celia, A Slave is a powerful masterwork of
passion and scholarship--a stunning literary achievement that brilliantly illuminates one of the most extraordinary
events in the long, dark history of slavery in America.

Shop the largest choice of History online in the UAE. Browse thousands of great deals on melton a mclaurin products with fast, free delivery.