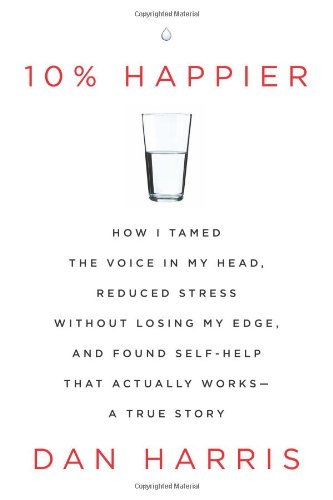 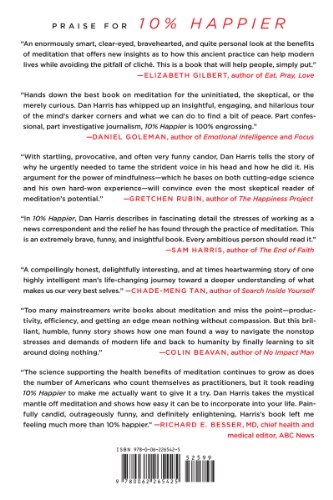 10% Happier: How I Tamed the Voice in My Head, Reduced Stress Without Losing My Edge, and Found Self-Help That Actually Works--A True Story

I met Dan Harris when a mutual friend suggested that we’d enjoy talking about habits, happiness, and meditation. We had
a great discussion, and in fact, Dan was one of several people who inspired me to try meditating. 10% Happier is his
hilarious, thought-provoking book about his experiences with meditation. I knew Dan had done a lot of thinking about the
relationship of habits and happiness, and how to use habits to foster happiness, so I was eager to hear what he had to
say.

Gretchen: What’s a simple habit that consistently makes you happier?

Dan: I never in a million years thought I’d be the type of person who’d say this, but my answer is … meditation.I had
always assumed that meditation was for robed gurus, acid-droppers, and people who keep yurts in their backyard. But then
I heard about the explosion of scientific research that shows the practice has an almost laughably long list of health
benefits, from lowering your blood pressure to boosting your immune system to essentially rewiring your brain for
happiness. I started with five minutes a day, and very quickly noticed three benefits: 1. Increased focus, 2. A greater
sense of calm, and 3. A vastly improved ability to jolt myself out of rumination and fantasies about the past or the
future, and back to whatever was happening right in front of my face.Over time (I’ve now been at it for about four years
and do 35 minutes a day), an even more substantial benefit kicked in: I created a different relationship to the voice in
my head. You know the voice I’m talking about. It’s what has us reaching into the fridge when we’re not hungry, checking
our e-mail while we’re in conversation with other people, and losing our temper only to regret it later. The ability to
see what’s going on in your head at any given moment without reacting to it blindly—often called “mindfulness”—is a
superpower.I’m certainly not arguing that meditation is a panacea. I still do tons of stupid stuff – as my wife will
attest. But the practice has definitely made me happier, calmer, and nicer.

Gretchen: What’s something you know now about forming healthy habits that you didn’t know when you were 18 years old?

Dan: A neuroscientist friend of mine once told me, “The brain is a pleasure-seeking machine. ” Usually, we do what makes
us feel good. What I know now about habit formation that I didn’t know then is that I generally cannot create or break
habits unless there is compelling self-interest involved.So, for example, with meditation, I was motivated to start the
habit by the science that says it’s good for you—and I’ve been able to maintain it because, while the act of meditating
is often quite tough, the “off-the-cushion” benefits are so readily apparent to me.

Gretchen: Do you have any habits that continually get in the way of your happiness?

Dan: Two biggies:1. Multitasking: I’ve seen all the studies that say our brains are not capable of concentrating on more
than one thing at a time and that multitasking is a huge drag on efficiency and productivity. And yet, I still
frequently find myself flitting between email, Twitter, phone calls, and whatever work I’m actually supposed to be
doing.2. Mindless eating: I try very hard to eat healthfully, but I am a huge sucker for pasta, cheeseburgers, and
cookies—and when I get into a feeding frenzy, it’s hard for me to stop. These episodes are almost always followed by a
shame spiral.In theory, meditation should help with the above, since it teaches you to pay careful attention to whatever
you’re doing right now. Alas, I still struggle. Hence the title of my book.

Gretchen: Have you ever managed to break an unhealthy habit? If so, how?

Dan: In my early thirties, as a young reporter for ABC News, I spent many years covering wars. When I got back from one
particularly long and hairy run in Baghdad, I became depressed. In an act of towering stupidity, I began to
self-medicate, dabbling with cocaine and ecstasy. In hindsight, it was an attempt, at least partly, to recreate some of
the thrill of the war zone.A side-effect of all of this, as my doctor later explained to me, was that the drugs
increased the level of adrenaline in my brain, which is what, in all likelihood, produced a panic attack I had on live
television in 2004 on Good Morning America. The shrink I consulted about this decreed in no uncertain terms that I
needed to stop doing drugs—immediately. Faced with the potential demise of my career, breaking this habit was a pretty
obvious call.

Gretchen: Have you ever made a flash change, where you changed a major habit very suddenly?

Dan: In the summer after I graduated from high school, I did experience a “flash change. ” I was in my car, driving to
go see some friends, and I decided—seemingly out of nowhere—that after years of being a mediocre high school student, I
was going to truly apply myself in the next phase of my life. The next year, when my father saw my first college report
card, he nearly cried.Interestingly, the fact that I did well in college has had zero practical impact on my career in
television news. I don’t think any of my employers has ever asked about my grades. But that flash change established a
long-lasting habit of hard work and ambition. Which, it must be said, has sometimes been to my detriment. It was, I now
believe, my fervent desire to excel at my job that led me to plunge headlong into war zones without considering the
psychological consequences—which, in turn, led to the drugs and the panic attack. I’ve found that meditation has really
helped me strike a better balance between striving and stress.