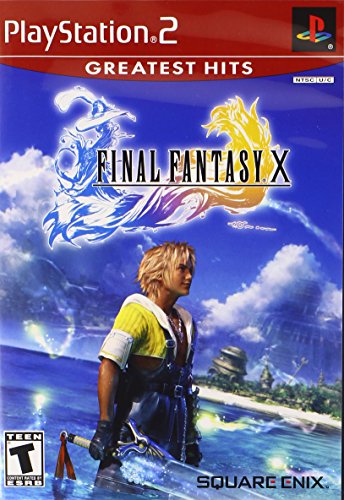 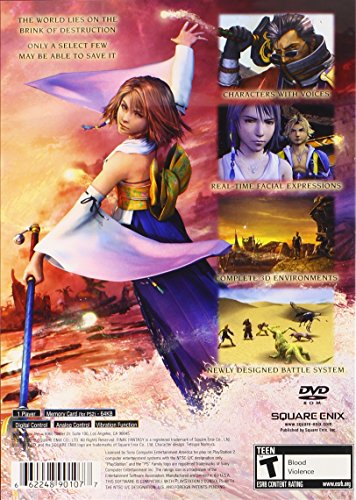 Tidus is a star athlete who survives a massive disaster, and with the help of a girl named Yuna, he journeys to temples & monasteries to find truth.

Spectacular graphics and incredible voiceover work will immerse you in a new world where evil forces threaten the existence of all you know!

Final Fantasy X finally enters a fully polygonic world. Follow the main character Tidus from a gripping blitzball
tourney into a new primitive world where he must fight to survive. A stunning level of real-time detail appears in each
area, including huge water-filled areas that make up a large part of the environment. An exciting combat system is
turn-based, thus allowing you the time to plot your actions without the need to worry about a constant barrage of enemy
attacks. You're also able to swap party members in and out of combat during battles, and doing so is a free action. Lush
visual elements enhance gameplay in this phenomenal action game.

Final Fantasy X is the first title in this landmark RPG series to be released for the PlayStation2. The main
characters are Tidus, a star of blitzball (a hugely popular sport in the Final Fantasy universe), and Yuna, who has
learned the art of summoning and controlling aeons, powerful spirits of yore. These two people of different backgrounds
must work together as they journey through the world of Spira. This installment of Final Fantasy has a distinctly Asian
influence, bringing a fresh feel to the characters, music, settings, and story.

Features include voice-overs for the first time in the series (utilizing the Facial Motion System), high-polygon,
motion-captured player characters designed by Tetsuya Nomura, and a camera that automatically adjusts its perspective to
correspond with the movements of the characters--a feature now possible because the game is largely polygonal.

Shop the largest choice of Playstation 2 online in the UAE. Browse thousands of great deals on by squaresoft products with fast, free delivery.