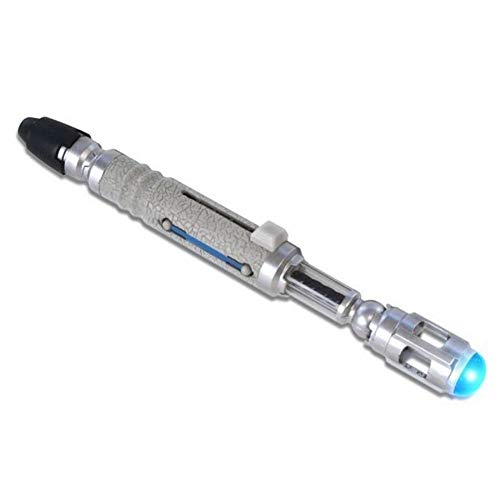 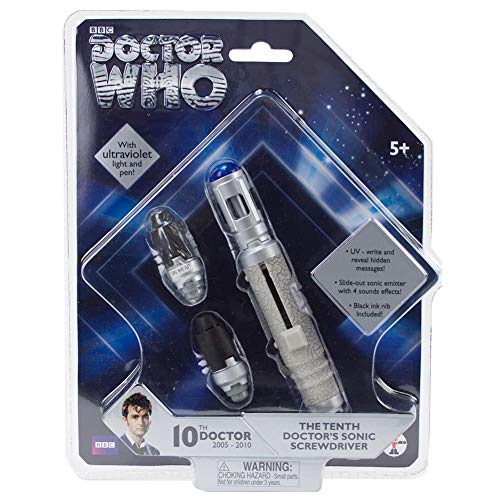 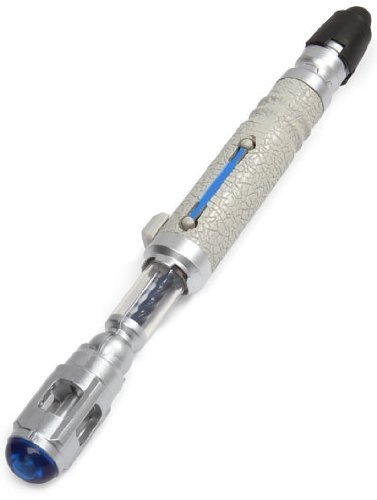 Flip open the cap at the end of the Screwdriver to reveal an additional button that activates the light and sound effects when it is in full extension OPEN mode.

Pressing the button on the side of the handle activates the LED and Sound FX which operates in CLOSED mode.

Let the Doctor help you get all of your home and office repairs done with this Electronic Sonic Screwdriver!
The Doctor's handy-dandy sonic screwdriver is the epitome of multifunctional gizmos. Whether it's driving a screw,
picking a lock, or disabling an opponent, this amazing implement seems to exhibit the precise capability required by its
owner at the time. Now this marvelous gadget can be yours! The sonic screwdriver measures 8-inches tall x 1-inch wide.
This Doctor Who Electronic Sonic Screwdriver Replica features button-activated light and sound effects. It includes a
hidden ultraviolet pen and UV light that reveals your secret writing, as well as a spare standard ink nib. Look who's
Doctor Who now! Requires 3x "AG13" button-cell batteries, included. The sonic screwdriver is a fictional tool in the
British sci-fi television series Doctor Who. Its most common function is to operate virtually any lock, mechanical or
electronic, and thus open doors for escape or exploration. It has also been used for repairing equipment, as an
offensive weapon, and occasionally even to drive screws. Like the TARDIS, it has become one of the icons of the program
and is closely associated with the Doctor.

Shop the largest choice of Toys And Games online in the UAE. Browse thousands of great deals on doctor who products with fast, free delivery.