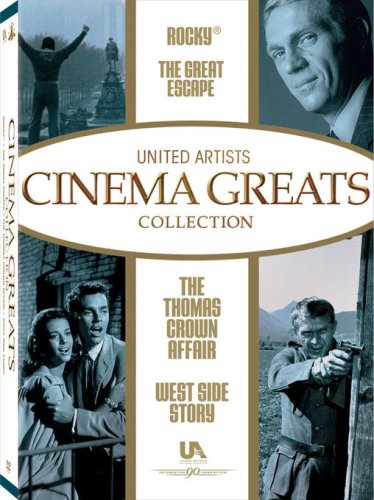 Disc 1: The Great Escape WS Disc 2: Rocky WS Disc 3: West Side Story P&S Disc 4 Side A: Thomas Crown Affair (1968) WS Disc 4 Side B: Thomas Crown Affair (1968) P&S .com ---- The Great Escape: The Great Escape image of Steve McQueen (as "The Cooler King") astride his motorcycle has entered silver-screen iconography, alongside Brando on his bike from The Wild One. Based on a true story about a group of POWs who mount a daring breakout from a supposedly inescapable Nazi prison camp, this rousing and suspenseful WWII epic features an all-star cast, including James Garner, Richard Attenborough, Charles Bronson, Donald Pleasence, James Coburn, and David McCallum. --Jim Emerson Rocky: The only remaining evidence that Sylvester Stallone might have had a respectable career, this 1976 Oscar winner (for Best Picture, Director, and Editing) is still the quintessential ode to an underdog and one of the best boxing movies ever made. After writing the script about a two-bit boxer who gets a "million-to-one shot" against the world heavyweight champion, Stallone insisted that he star in the title role, and his equally unknown status helped to catapult him (and this rousing film) to overnight success. The story is familiar, but it has been handled with such vitality and emotional honesty that you can't help but leap and cheer for Rocky Balboa, the chump turned champ (despite his valiant defeat in the ring) who stuns the boxing world with the support of his timid girlfriend, Adrian (Talia Shire), and grizzled trainer, Gus (Burgess Meredith). Oscar nominations went to all the lead actors (including Burt Young as Adrian's hot-tempered brother), but five sequels could never top the universal appeal of this low-budget crowd pleaser. --Jeff Shannon West Side Story: The winner of 10 Academy Awards, this 1961 musical by choreographer Jerome Robbins and director Robert Wise (The Sound of Music) remains irresistible. Based on a smash Broadway play updating Shakespeare's Romeo and Juliet to the 1950s era of juvenile delinquency, the film stars Natalie Wood and Richard Beymer as the star-crossed lovers from different neighborhoods--and ethnicities. The film's real selling points, however, are the highly charged and inventive song-and-dance numbers, the passionate ballads, the moody sets, colorful support from Rita Moreno, and the sheer accomplishment of Hollywood talent and technology producing a film so stirring. Leonard Bernstein and Stephen Sondheim wrote the score. --Tom Keogh The Thomas Crown Affair: Millionaire businessman Thomas Crown (Steve McQueen) is also a high-stakes thief; his latest caper is an elaborate heist at a Boston bank. Why does he do it? For the same reason he flies gliders, bets on golf strokes, and races dune buggies: he needs the thrill to feel alive. Insurance investigator Vicky Anderson (Faye Dunaway) gets her own thrills by busting crooks, and she's got Crown in her cross hairs. Naturally, these two will get it on, because they have a lot in common: they're not people, they're walking clothes racks. (McQueen looks like he'd rather be in jeans than Crown's natty three-piece suits.) The Thomas Crown Affair is a catalog of '60s conventions, from its clipped editing style to its photographic trickery (the inventive Haskell Wexler behind the camera) to its mod design. You can almost sense director Norman Jewison deciding to "tell his story visually," like those newfangled European films; this would explain the long passages of Michel Legrand's lounge jazz ladled over endless montages of the pretty Dunaway and McQueen at play. (The opening-credits song, "Windmills of Your Mind," won an Oscar.) It's like a "What Kind of Man Reads Playboy?" ad come to life, and much more interesting as a cultural snapshot than a piece of storytelling. --Robert Horton
Show More
Reviews