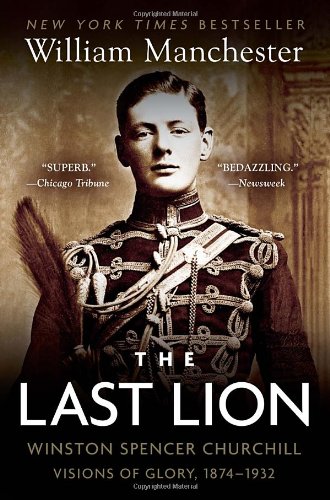 When Winston Churchill was born in Blenheim Palace in 1874, Imperial Britain stood at the splendid pinnacle of her
power. Yet within a few years the Empire would hover on the brink of catastrophe. Against this backdrop, a remarkable
man began to build his legacy. From master biographer William Manchester, The Last Lion: Visions of Glory reveals the
first fifty-eight years of the life of an adventurer, aristocrat, soldier, and statesman whose courageous leadership
guided the destiny of his darkly troubled times—and who is remembered as one of the greatest figures of the twentieth
century.

Praise for The Last Lion: Visions of Glory

“Absolutely magnificent . . . a delight to read . . . one of those books you devour line by line and word by word and
finally hate to see end.”—Russell Baker

“Manchester has read further, thought harder, and told with considerable verve what is mesmerizing in [Churchill’s]
drama. . . . One cannot do better than this book.”—The Philadelphia Inquirer

“An altogether absorbing popular biography . . . The heroic Churchill is in these pages, but so is the little boy
writing forlorn letters to the father who all but ignored him.”—People

“Superb . . . [Manchester] pulls together the multitudinous facets of one of the richest lives ever to be chronicled. .
. . Churchill and Manchester were clearly made for each other.”—Chicago Tribune

“A vivid, thoroughly detailed biography of the Winston Churchill nobody knows.”—Boston Herald

“Adds a grand dimension . . . rich in historical and social contexts.”—Time