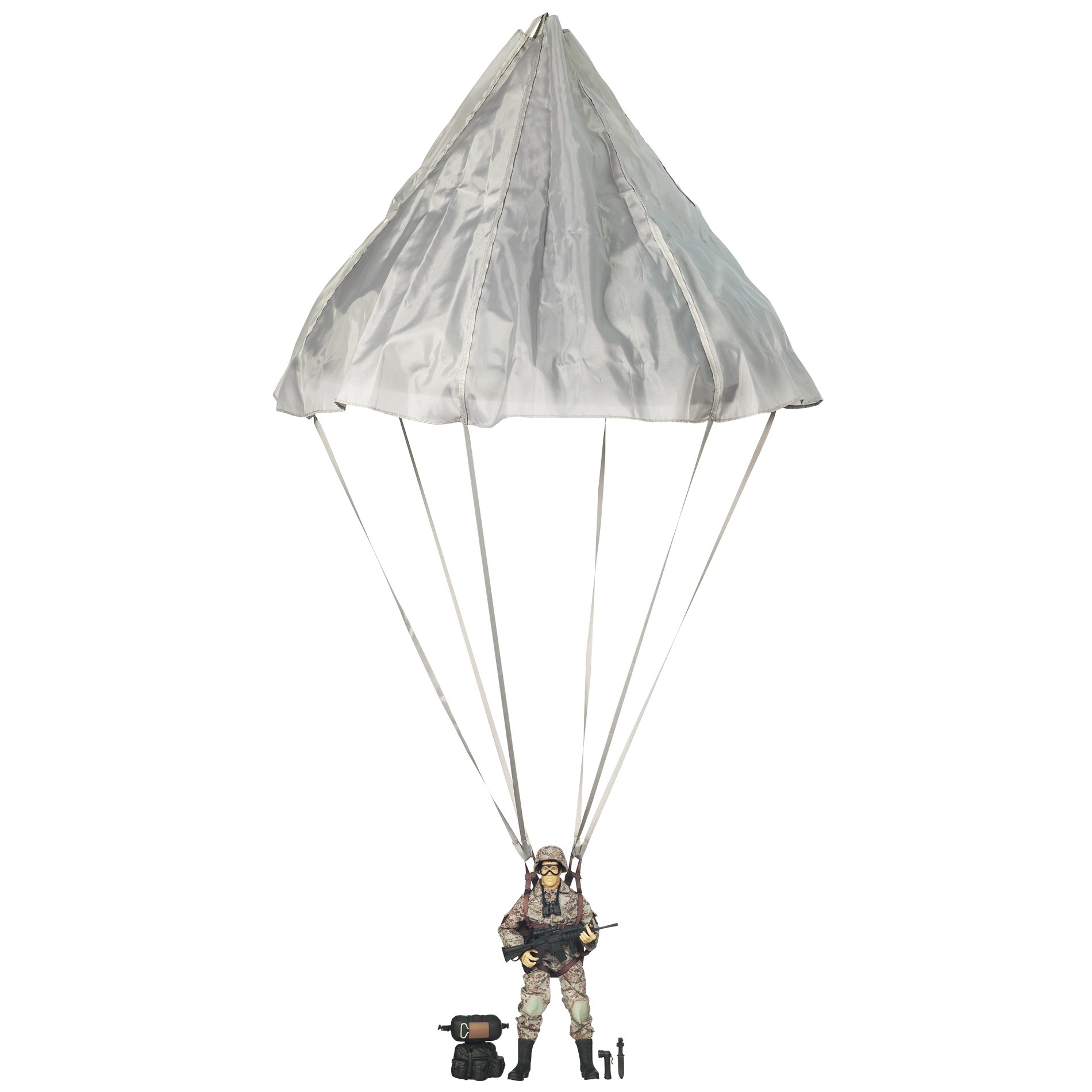 .com ---- Inspired by real-life heroes, the Hasbro G.I. JOE Army Paratrooper brings action to your child's fingertips. Intended for ages 5 and older, this figure measures 12 inches tall and stands ready to leap into action. With a highly detailed poseable design, working parachute, and arsenal of weapons, the Army paratrooper is an ideal toy for serious G.I. Joe collectors. G.I. JOE Army Paratrooper G.I. JOE Army Paratrooper ------------------------- * Ages: 5+ Choking hazard--Small parts. Not for children under 3 years of age. At a Glance: ------------ * Stands 12 inches tall with detachable parachute * Working parachute opens when figure is thrown in the air * Fully poseable with articulating joints and swiveling waist * Moveable fingers can grip weapons and accessories * Includes assault rifle, knife, binoculars, and other weapons and accessories G.I. JOE Army Paratrooper ( https://images-na.ssl-images-.com/images/G/01/toys/detail-page/c26-B004SGORBK-1-l.jpg ) G.I.Joe Army Paratrooper stands 12 inches tall and features an arsenal of weapons. View larger ( https://images-na.ssl-images-.com/images/G/01/toys/detail-page/c26-B004SGORBK-1-l.jpg ). G.I. JOE Army Paratrooper ( https://images-na.ssl-images-.com/images/G/01/toys/detail-page/c26-B004SGORBK-2-l.jpg ) A working nylon parachute opens to guide Army Paratrooper to the ground. View larger ( https://images-na.ssl-images-.com/images/G/01/toys/detail-page/c26-B004SGORBK-2-l.jpg ). Poseable Figure with Articulating Fingers ----------------------------------------- The Army paratrooper features remarkable detailing your child will appreciate. Accented with G.I. Joe and Special Forces' emblems, the modern button-up fabric uniform features a sleek camouflage pattern with intricate stitching, pockets, and Velcro grips. The figure's durable mold offers realistic muscle texture, hair, and facial details and even includes the iconic G.I. Joe scar on the right cheek for a hard-nosed battle image. As with all soldiers, the paratrooper is ready to spring into action at a moment's notice. Standing an impressive 12 inches tall, the figure is fully poseable with articulating joints and swiveling torso. When it comes time to handle the assortment of weapons, the paratrooper can do so easily with its poseable fingers. Each hand features moveable fingers with a separate index finger that opens fully to securely grip the trigger of a gun in realistic fashion. Wide Array of Combat Accessories -------------------------------- Fully prepared for battle, the paratrooper comes with an assortment of weapons and accessories to guide him to victory. In addition to being equipped with a helmet and goggles, the figure is adorned with binoculars, flashlight, jump pack, and sheathed knife to help in close-quarters combat operations. For more intense enemy engagements, the figure brandishes a utility belt with holstered pistol and a tactical assault rifle with removable clip. Depending on the accessories attached, the paratrooper can be challenging to pose without tipping over. Kids will want to experiment with accessories to find out what works best for which game-play scenario. But whether packed light or loaded up, the paratrooper is ready for numerous game-play scenarios. Working Parachute Opens When Thrown ----------------------------------- The Army Paratrooper features a working parachute that fully opens to guide him safely to the ground. Attached to a removable harness with six tethers, the folded nylon parachute deploys once the figure is thrown at a 45 degree angle high into the air (about 15 feet). Young children may have difficulty throwing the figure at the required height, so an adult's assistance may be required. If the figure is thrown less than 15 feet, the parachute may not open fully, causing the figure to land hard and resulting in the helmet and accessories popping off. The paratrooper is built to withstand some hard knocks, but the parachute's tethers are easy to get tangled, making them tricky to detach, straighten out, and reattach. About G.I. Joe -------------- G.I. Joe began as a Hasbro toy line back in 1964, featuring poseable toy soldiers that inspired the term "action figure." In 1982, the toys were reintroduced in the Real American Hero line, pitting G.I. Joe against Cobra, a ruthless terrorist organization bent on world domination. A live-action movie based on G.I. Joe was released in 2009 and has continued the toy line's popularity. Celebrating 30 years of a Real American Hero, kids can bring home the Army Paratrooper to honor those who defend our freedom and safety every day with their dedicated service and selfless sacrifice. What's in the Box ----------------- G.I. Joe Real American 12-Inch Paratrooper figure, helmet, goggles, parachute, jump pack, tactical assault rifle with removable clip, combat knife, pistol, binoculars, flashlight, dogtags, and instructions. From the Manufacturer --------------------- Your courageous Army Paratrooper figure is ready to brave danger in the air and on the ground! Put his jump pack on for the next daring dive into action and prepare him with his binoculars and flashlight.
Show More
Reviews