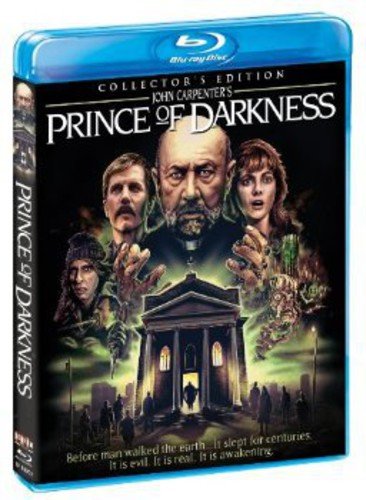 Master of horror John Carpenter (Halloween, The Thing) directs this terrifying battle between mankind and the ultimate evil. A group of graduate students and scientists uncover an ancient canister in an abandoned church, but when they open it, they inadvertently unleash a strange liquid and an evil force on all of humanity. As the liquid turns their co-workers into zombies, the remaining members realize they have released the most unspeakable horror of them all. Terror mounts as the team must fight to save the world from a devilish fury that has been contained for over seven million years. Starring Donald Pleasence (Halloween), Jameson Parker (Simon & Simon), Lisa Blount (Needful Things), rock icon Alice Cooper (Roadie) and Victor Wong and Dennis Dun (both from Carpenter’s Big Trouble In Little China), this ingenious twist on classical occultism (Science Fiction, Horror And Fantasy Film Review) will scare you witless! .com ---- Though regarded by many as one of writer-director John Carpenter's lesser efforts, Scream Factory gives Prince of Darkness the deluxe treatment with this Blu-ray presentation. As with previous releases from the Shout! Factory imprint, the supplemental features on Prince of Darkness are a mix of new material recorded specifically for the disc and extras from previous DVD releases. Chief among the latter is a commentary track featuring Carpenter and veteran character actor Peter Jason (Deadwood), who made his first of seven eventual collaborations with the director on this picture. Carpenter is typically phlegmatic if informative, discussing in detail the initial concepts for the film, as well as its locations, special effects, and his score with Alan Howarth. Carpenter is also quite frank in his opinion of Darkness, which he seems to regard (like many viewers) as somewhat incomprehensible (despite the fact that he wrote it as Martin Quatermass). But his rapport with Jason is enjoyable, and Carpenter provides even more detail on the film's inception and execution in the ten-plus-minute interview segment Sympathy for the Devil, which features, among other comments, the scientific and philosophical origins of the project, as well as his interest in retaining greater control over his work. Rocker Alice Cooper, whose involvement with the film came through his manager, executive producer Shep Gordon (whose company, Alive Films, co-funded the picture as well as Carpenter's They Live and Village of the Damned), is front and center in a lively nine-minute interview piece that focuses on his love for horror movies and his brief acting turn in the picture. Co-composer Alan Howarth gets the spotlight in a ten-minute interview that provides some insight into his musical collaborations with Carpenter, while actor/special effects supervisor Robert Grasmere, who played the doubtful member of the investigative team while also wrangling the massive canister, which apparently leaked on a regular basis, earns his own interview. A segment of Horror's Hallowed Grounds has host Sean Clark revisiting many of the film's locations, including the church and control center (now a movie theater). The rest of the extras are an interesting mixed bag of promotional material--numerous advertisements and promotional stills, as well as a radio spot and theatrical trailer--and a pair of rare items: the alternate opening from the TV broadcast version, which intimates (in a very obtuse manner) that the events in the film might be a dream, and an Easter Egg (easily found on the bonus menu) that reveals a Q&A session with Carpenter about the picture at a 2012 screening at Screamfest. --Paul Gaita
Show More
Reviews