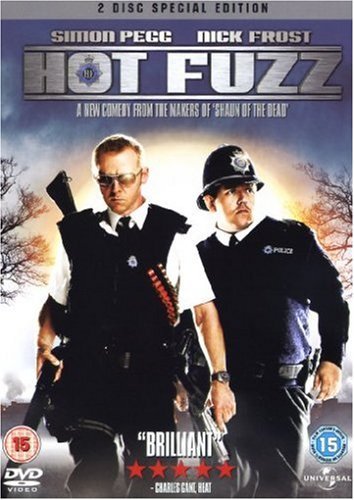 A major British hit, a lorryload of laughs and some sparkling action? We’ll have some of that. It’s fair to say that Hot Fuzz proves that Simon Pegg and Edgar Wright’s brilliant Shaun Of The Dead was no one-off, serving up a superbly crafted British homage to the Hollywood action movie. Deliberately set in the midst of a sleepy, quaint English village of Sandford, Pegg’s Nicholas Angel is sent there because, bluntly, he’s too good at his job, and he’s making his city colleagues look bad. The proverbial fish out of water, Angel soon discovers that not everything in Sandford is quite as it seems, and joins forces with Nick Frost’s lumbering Danny Butterman to find out what’s what. Hot Fuzz then proceeds to have a rollicking good time in both tipping its hat to the genre films that are clearly its loving inspiration, and coming up with a few tricks of its own. It does comedy better than action, with plenty of genuine laugh-out-loud moments, but it’s no slouch either when the tempo needs raising. One of the many strong cards it plays is its terrific cast, which includes former 007 Timothy Dalton, Bill Nighy, Bill Bailey, Paddy Considine, Edward Woodward and Jim Broadbent. Hot Fuzz, ultimately, just falls short of Shaun Of The Dead, but more than does enough to warrant many, many repeat viewings. It’s terrific fun, and in the true hit action movie style, all-but-demands some form of sequel. That said, with Pegg and Wright now with two excellent, and suitably different, genres ticked off, it’ll be interesting to see what they do next. A period drama, perhaps...? --Simon Brew
Show More
Reviews