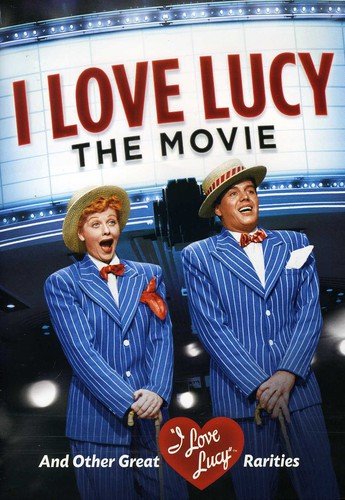 Brand : Arnaz Desifrawley William
from USA
to UAE
in 5-8 days
At your doorstep by Aug 13  to Aug 16 with standard delivery

Product Description ------------------- In 1953, three classic first season I Love Lucy episodes (“The Benefit,” “Breaking the Lease,” and “The Ballet”) were edited together with newly-filmed connecting scenes to create this never-before-released feature-length film. The film had only a single "test" screening in 1953 at a small theatre in Bakersfield, attended by the Arnazes. But Lucy and Desi had just signed a deal with M-G-M to do "The Long, Long Trailer", and M-G-M, fearing competition, insisted that they shelve the film. And that's literally what happened. I Love Lucy: The Movie was put back on a shelf, in a mislabeled can, and was lost for nearly half a century, until it was discovered in the Paramount vault by Dann Cahn in 2001. .com ---- Those who really love Lucy already have this material if they purchased the 2007 I Love Lucy: The Complete Series boxed set. But even for those who merely like Lucy, this is an essential trove of rarities and archival treasures. I Love Lucy: The Movie was produced in 1953 to capitalize on the Emmy-winning series' phenomenal popularity. It comprises three season 1 episodes, "The Benefit," "The Lease," and "The Ballet." No doubt you've seen them countless times, but what you may not have seen is the new footage that was created to set the stage for the episodes and connect them into a seamless film. The movie begins with a priceless scene in which Desi Arnaz warms up an I Love Lucy studio audience, complete with cast introductions, and a funny gag utilizing the studio cameras. This must have been what it was like to attend a filming at the Desilu Playhouse. The feature was shelved and never released theatrically due to a conflict with MGM's The Long, Long Trailer, which Lucy and Desi were reportedly contractually bound to promote. I Love Lucy: The Movie was long lost and unknown to all but the most hard-core fans, and its discovery in 2001 was, for classic-TV buffs, perhaps on par with the unearthing of The Honeymooners: The Lost Episodes. The bonus features on this disc were also included in the Complete Series set, and they are babalu-tastic. Perhaps the best is an excerpt from the Sixth Annual Emmy Awards, at which Desi speaks on behalf of television writers, who at the time were not eligible for awards. Also included are Lucy and Desi's first joint TV appearance on The Ed Wynn Show, and a colorized version of the episode "Lucy Goes to Scotland." What's not to love? --Donald Liebenson
Show More

I Love Lucy: The Movie and Other Great Rarities

Where can I buy I Love Lucy The Movie And Other Great Rarities online at the best price in the UAE?

desertcart is the best online shopping platform where you can buy I Love Lucy The Movie And Other Great Rarities from renowned brand(s). desertcart delivers the most unique and largest selection of products from across the world especially from the US, UK and India at best prices and the fastest delivery time.

Is I Love Lucy The Movie And Other Great Rarities available and ready for delivery in in UAE?

Is it safe to buy I Love Lucy The Movie And Other Great Rarities on desertcart?

Yes, it is absolutely safe to buy I Love Lucy The Movie And Other Great Rarities from desertcart, which is a 100% legitimate site operating in 164 countries. Since 2014, desertcart has been delivering a wide range of products to customers and fulfilling their desires. You will find several positive reviews by desertcart customers on portals like Trustpilot, etc. The website uses an HTTPS system to safeguard all customers and protect financial details and transactions done online. The company uses the latest upgraded technologies and software systems to ensure a fair and safe shopping experience for all customers. Your details are highly secure and guarded by the company using encryption and other latest softwares and technologies.