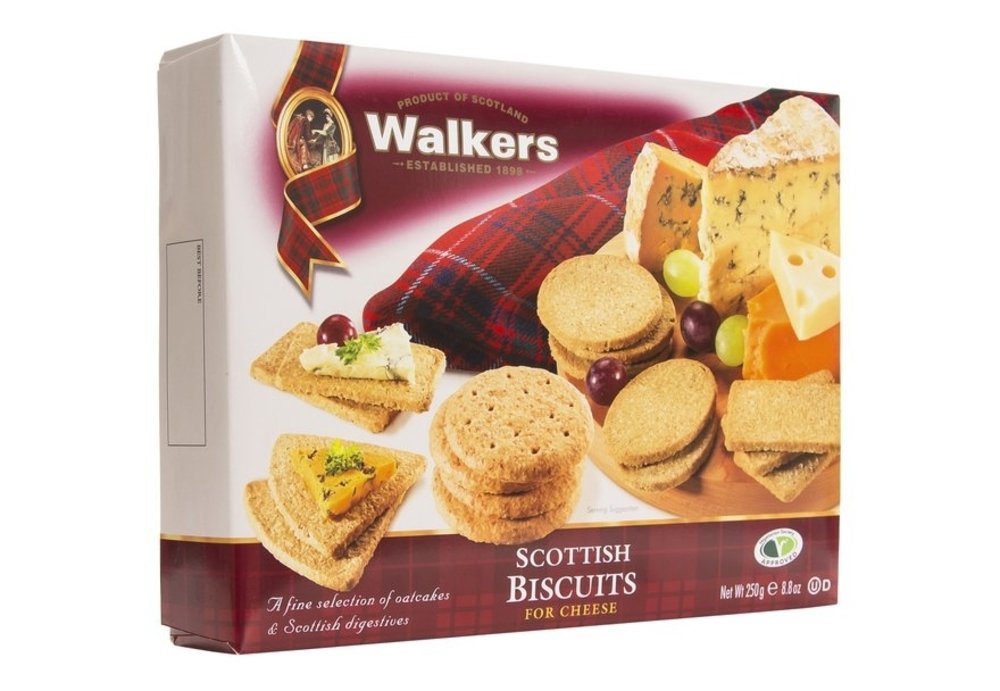 Flavor Name:Scottish Biscuits for Cheese Size:8.8 Ounce (Pack of 1) This selection complements both the old favorite hard cheeses and the increasingly popular soft continental cheeses. We've included our coarse and fine Oatcakes, made with the finest quality oats and pure highland water. Plus, we added Sweet Scottish Butter Digestive Biscuits - made with quality oats, creamy butter and raw cane sugar for a crisp, crunchy texture. They contain no artificial flavorings, colorings or additives and are certified Kosher OUD From the Manufacturer --------------------- BRAND STORY The Walkers story begins over a hundred years ago in 1898 in the Scottish Highlands, when the twenty-one year old Joseph Walker opened the doors of his own bakery with a loan of £50 and the dream of making the finest shortbread in the world. In the first year of business, Joseph used every spare moment to perfect his shortbread recipe, and it was time well spent. As his fame spread, and demand increased for his quality shortbread, Joseph took the first steps to expanding the business by moving to a larger shop in the Speyside village of Aberlour and investing in a horse and cart to deliver his baking further afield. During the 30s, the business - like Joseph's family - was expanding. Two of his sons - James and Joseph - joined the business, bringing fresh, new ideas with them. By 1936, they had introduced three valuable additions to the business: a range of cakes, a selection of confectionery - and the company's first delivery van. Now Walkers produce could be sold even further afield, and the prospects for expansion were looking promising. While some manufacturers began to cut corners by using margarine instead of butter, Joseph believed that people still appreciated the care that went into making a superior product like Walkers shortbread. And he was right. That's why, even after Joseph Walker died in 1954, his sons continued to use his original recipe. Demand grew, and so did the business. By 1961, all three of James' children - Joseph, James and Marjorie - had joined the business, making the third generation of Walkers working for the family firm. By 1975, Walkers had outgrown their extended bakery, and moved to a custom built factory that gave them the extra space and facilities they needed to develop new products such as Chocolate Chip Shortbread and specialty cookies. By the 1970s, Joseph's grandchildren had begun exporting Walkers shortbread to over 60 countries around the world - still baking to his original recipe. Within a decade, they won the first of three Queen's Awards for Export Achievement - the highest accolade given to British exporters. Then, as now, Walkers stayed in touch with their customers by testing every new product in Aberlour's village shop. So, customers around the world are enjoying a range of products that were first given the seal of approval by the villagers of Aberlour. Consistent quality and traditionally delicious recipes have made Walkers the choice of the most discerning customers and retailers. Walkers reputation grows day by day as loyal customers worldwide delight in traditional shortbreads and innovative new products like almond, ginger and luxurious chocolate covered shortbread. All Walkers' products are packaged in its unmistakable red tartan and proudly bearing the image of Bonnie Prince Charlie and Flora MacDonald, the image which captures one of the most romantic moments from Scotland’s history, and reflects all the tradition and care that goes into baking every piece of Walkers shortbread. The quality and natural goodness of Walkers has attracted many international awards, including five gold Mondiale medals and the Food from Britain Innovation Award. While Joseph's children and grandchildren have moved with the times, they have always remained true to his original ideal - and his original recipe. So, when the family opened a new factory at Elgin to produce their popular new range of shortbread cookies and biscuits, they naturally still insisted on using only the finest ingredients: plump fruits, aromatic spices, chunks of real chocolate and flavorsome nuts. And there's not an artificial flavoring, coloring or preservative in sight. Just as Joseph Walker guaranteed all those years ago. Today, Joseph would be proud to know that his great grandchildren are carrying on the family tradition and are now the fourth generation of Walkers to make 'The world's classic pure butter shortbread'.
Show More
Reviews