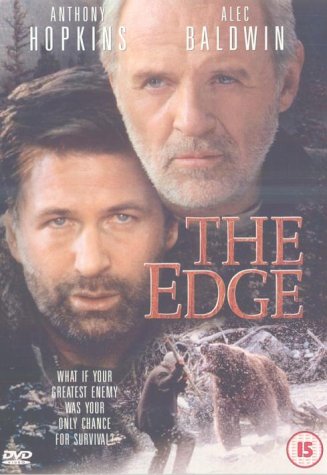 DVD Special Features: Featurette Seven Video Clips Trailer Screen Access Multiple Access Subtitles Cast Pages Language: English Dolby Digital 5.1 Subtitles: Czech, Danish, Finnish, Hebrew, Hungarian, Icelandic, Norwegian, Polish, Portuguese, Swedish, English for the hearing impaired. 2.35:1 Aspect Ratio Widescreen Version 16:9 From .co.uk ----------- In The Edge writer David Mamet created two engrossing and memorable characters; an urbane fashion photographer played by Alec Baldwin and a reserved and intellectual billionaire played by Anthony Hopkins. They find themselves teamed up against both a giant Kodiak bear and their own inner demons, when lost together in the Alaskan wilderness. The subject matter includes male rivalry, the isolationism of extreme wealth and, most conspicuously, the survival of the fittest. Mamet's script, which sounds a little too arched in spots, is well served by New Zealand director Lee Tamahori, who knows how to capture beauty and brutality in one frame. Although the themes are enormous in scope, they are well balanced and one rarely overpowers the other, nor does the achingly beautiful scenery overshadow the acting. Even if you don't like the intellectualism of the dialogue, there are some great scenes with the bear. --Rochelle O'Gorman, .com P.when('A').execute(function(A) { A.on('a:expander:toggle_description:toggle:collapse', function(data) { window.scroll(0, data.expander.$expander[0].offsetTop-100); }); }); From the Back Cover ------------------- A plane crash in the freezing Alaskan wilderness pits intellectual billionare Charles Morse (Anthony Hopkins) against self-satisfied fashion photographer Robert Green (Alec Baldwin) in a brutal struggle for survival. Each soon discovers that the greatest danger resides not in nature, but from human fear, treachery, and quite possibly, murder. This nerve racking adventure filled with non-stop action and gripping suspense, is a harrowing tale from one of America's leading screenwriters, David Mamet (The Untouchable, Glengarry Glen Ross). END See more ( javascript:void(0) )
Show More
Reviews