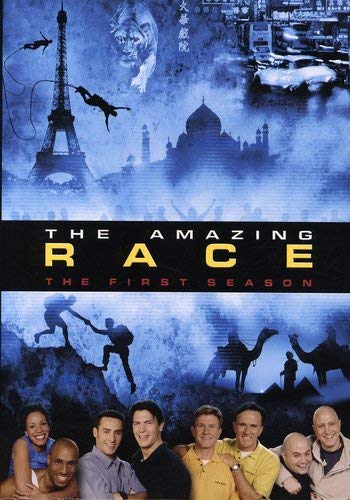 The complete first season of the TV series The Amazing Race. .com ---- "A race like no other in history," Jerry Bruckheimer's Emmy magnet begins (and ends) in New York with 11 teams of 22 competitors. In the end, only one team will be left standing. Their prize? One million dollars. To win, they will have to travel the world using clues, a modicum of cash, and their minds. Patience, endurance, and a sense of direction certainly won't hurt (plane tickets, fortunately, are prepaid). The 2001 season is divided into 13 episodes (including two-part finale "Race to the Finish"). Instead of Immunity, there are Fast Forwards. The first team to find one goes straight to the next Pit Stop (rest area), bypassing any Roadblocks (tasks) left in the leg, while a Detour is a choice between two tasks. Some of the more hair-raising stunts include bungee jumping in Zambia ("The Race Begins") and beetle-munching in Beijing ("Fight to the Last Minute"). Other exotic ports of call include Paris, Rome, Tunis, New Delhi, and Bangkok. From the start, certain teams assert themselves--and not always in the most positive ways. They include bickering (and nauseated) couples Paul and Amie (recently engaged) and Lenny and Karyn (dating), separated parents Margarita and Frank, and 14-year life partners Bill and Joe, AKA Team Guido (a name inspired by their dog). Other contestants include friends, roommates, grandparents, working mothers, and law partners. The road ahead will be long. Some partnerships will be strengthened by the journey. Others will be weakened. As with Survivor, alliances will be formed, like mother/daughter duo Nancy and Emily with self-proclaimed "Ugly American" frat brothers Kevin and Drew. (The Guidos uncharitably dub the latter "the fatties," while Kevin and Drew dub them Bert and Ernie.) The Amazing Race is hosted by low-key New Zealander Phil Keoghan. --Kathleen C. Fennessy
Show More
Reviews