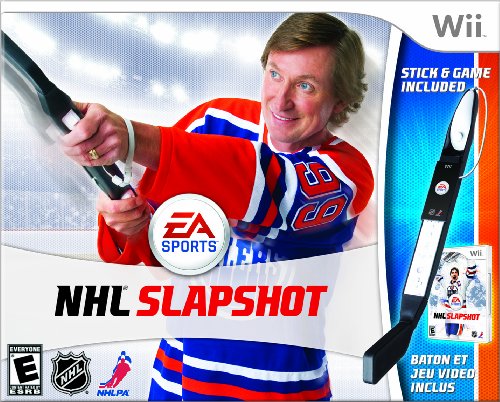 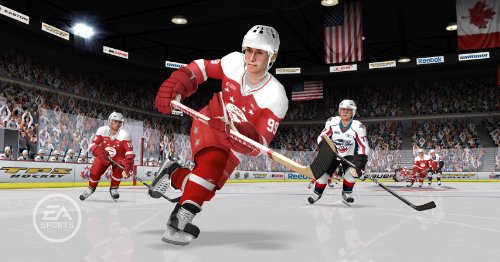 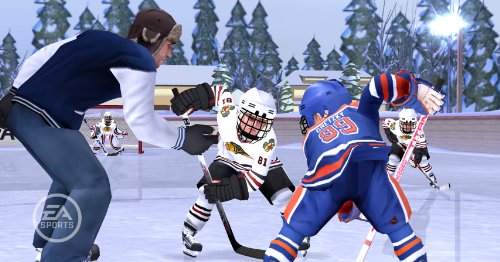 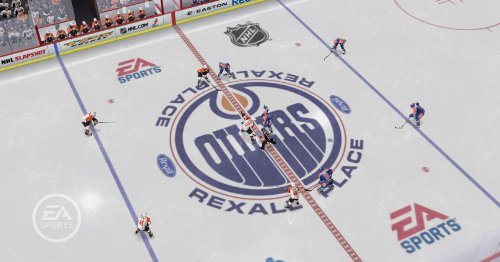 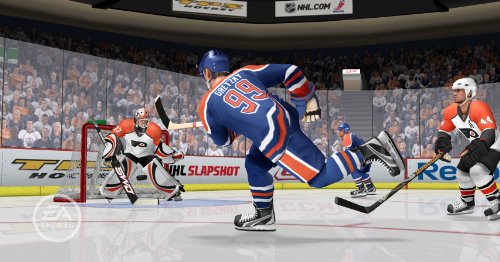 by by electronic arts

Deke, check, and shoot with the all-new NHL Slapshot Hockey Stick game accessory, included with NHL Slapshot. Simply plug the Wii Remote and Nunchuk into the hockey stick and take over any game like a true NHL All-Star.

In Peewee to Pros Mode, start your hockey career as a Peewee on the neighborhood rink playing 3 on 3, and work your way through Bantam and Junior leagues, to 5 on 5 in the NHL.

Play as NHL legend Wayne Gretzky and take to the ice as the Great One in Peewee to Pros mode, or in Play Now mode at any level. Gretzky also provides game day tips and coaching advice.

Whether it’s 3 on 3, or 5 on 5 games, play with or against all the real players and teams from the CHL, AHL, and NHL. Play through a full NHL Season and Playoffs, for your chance to hoist the Stanley Cup!

Practice deking and shooting in a fun, split-screen minigame for players of every skill level. Take shots on net to beat the goalie, or use your Nunchuk and Wii Remote as your glove and blocker to defend the net!

The makers of NHL 10, are proud to deliver NHL Slapshot. With gameplay centered on you, fulfill the ultimate dream of
becoming an NHL All-Star by beginning a career at the Peewee level before working your way to the Pros, or take to the
ice as ‘The Great One’, Wayne Gretzky, and play out the ultimate Hockey career. NHL Slapshot, putting the game of hockey
right in your hands.

Level up your skills

You started out like all the pros do: wobbly on the ice, playing three-on-three in the neighborhood rink. All that has
changed now. You've trained and drilled until your blades dulled, and you've earned your spot on the NHL roster. Now the
pressure is on: it's the championship game and the Stanley Cup is within your grasp. There's one minute to go and you
hurl yourself toward the puck, feel it nestle against your stick and bolt into a breakaway. You hear the scraping of
your opponents' blades close behind you. Your muscles tire but you hold your stick firmly in your hands. The goal is
just feet away and the moment is yours for the taking: will you make the championship-winning Slapshot and become a
hockey legend?

All of the realistic, exhilarating action is in your own two hands when you pick up the NHL Slapshot hockey stick
accessory - skillfully deke, check and shoot with the stick and watch your moves translate into real-time action on your
screen. When you control every move, it's up to you to make all of your hockey dreams come true. Start as a peewee and
work your way up to play with all of your NHL heroes in a demanding career mode. Do you want to achieve the ultimate
level of hockey greatness? Seize the opportunity to take the ice as "The Great One," Wayne Gretzky, and experience what
it's like to be a living legend. Whether you're riveting your eyes to the prize or just shooting the net with friends in
fun mini games, you'll never want to unlace your skates and step away from NHL Slapshot.

* From the makers of NHL 10, winner of 12 "Sports Game of the Year" awards
* Features an all-new, accessible and intuitive NHL Slapshot hockey stick game accessory that attaches to your Wii
Remote and Nunchuk to put every pass, shot, check and deke into your hands (Wii Remote and Nunchuk not included)
* Become an NHL All-Star by beginning at the peewee level and working your way through junior and bantam leagues to
five-on-five in the NHL
* Have fun playing three-on-three in the neighborhood rink or feel the pressure of five-on-five NHL play
* Level up your skills and attributes as you learn hockey fundamentals during your journey to the pros
* Take to the ice in jersey #99 as "The Great One," Wayne Gretzky, so you can live out your ultimate hockey dream
* Get exclusive game-day tips and coaching advice from "The Great One" himself
* Play with or against all the real players and teams from the CHL, AHL and NHL
* Play through a full NHL season and playoffs for your chance to hoist the Stanley Cup
* Split-screen shootout mini game is a fun way to practice and perfect your skills: take shots on the net to beat the
goalie or use your Nunchuk and Wii Remote as glove and blocker to guard the goal
* Four over-the-the top multiplayer games let you share the fun with friends and family, from the mayhem of Free 4 All
to the pressure of Classic Shootout, the fun of two-on-two and the competition of Shooter vs. Goalie
* For 1 to 4 players