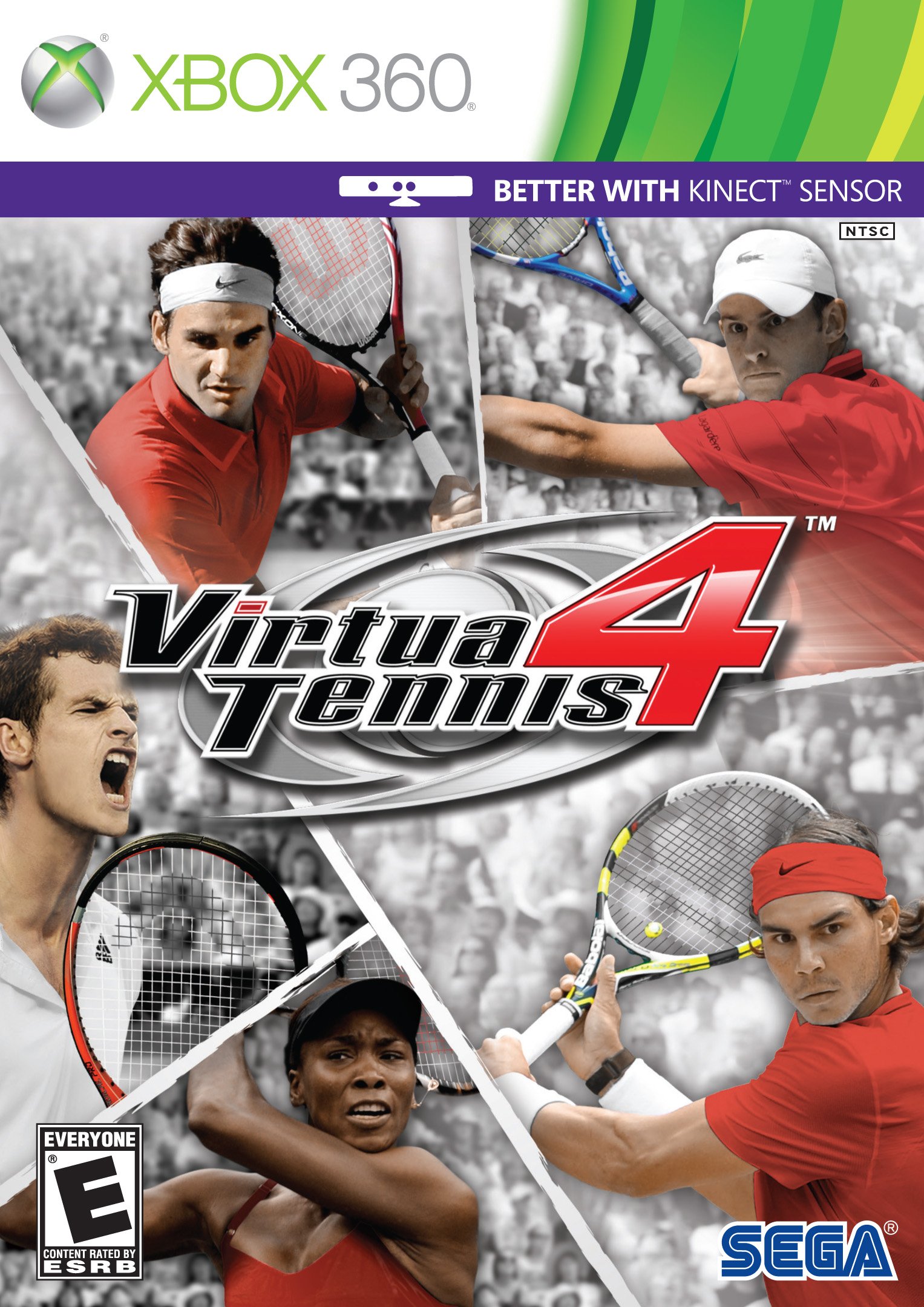 Virtua Tennis 4 (XBOX 360) .com ---- Virtua Tennis 4 is a tennis simulation game featuring 22 of the current top male and female players from the ATP and WTA tennis tours. Along with classic Virtua Tennis tournament style action, Virtua Tennis 4 for Xbox 360 features full Kinect functionality, allowing players to experience the game at an even higher level as they swing through forehands, backhands, serves, overheads and more, just as if they were on court, but without having to hold a controller. Additional features include: an all-new intelligent matchmaking system and competition creator, a new career mode and the new Match Momentum feature that allows for improved abilities and confidence. Virtua Tennis returns with the hottest ATP and WTA players, 40 courts and Microsoft Kinect functionality. View larger. Take a Swing with Microsoft Kinect ---------------------------------- The best-selling tennis series is back in time for the lion's share of the Grand Slam season with revolutionary new features and an all-star lineup. And with the Xbox 360 version of the game the developers of the original Virtua Tennis are taking the world of competitive tennis to a new level using the power of revolutionary Kinect sensor technology. Dispensing with the need for a handheld controller, the Kinect sensor allows players to take the court simulating forehands, backhands, serves, smashes and volleys using only natural arm movements. The Top Players of Today's Game ------------------------------- Virtua Tennis 4 features 40 breathtaking courts from around with world as well as 22 of the world's top tennis stars from the ATP and WTA tour rosters. A sampling of players include men's Grand Slam champions and contenders like Rafael Nadal, Roger Federer, Novak Djokovic, Juan Martin Del Potro, Andy Murray and Gael Monfils, as well as Maria Sharapova, Venus Williams, Caroline Wozniacki and Anna Ivanovic from the women's side of the draw. All will play their hearts out for a shot at the championship title, in dramatic TV-style camera action. A brand new Career Mode promises hours of fun in the quest for the top ranking, while the new online hub will be the go-to place for fans who want to compete with other Virtua Tennis stars from around the world. Key Game Features ----------------- * Motion Control - New motion control compatibility via Kinect for Xbox 360 gives players ultimate freedom, accuracy and style in shot placement. * New Online Center - Players enjoy a vastly improved online experience with the all-new intelligent matchmaking system and competition creator. * New Career Mode – A totally new World Tour is a fresh take on the Virtua Tennis Career mode. As players work toward becoming the people's favorite, this new mode helps them manage competition pressures both on and off the court. * Match Momentum - This brand new on-court feature makes for more dramatic matches. In building up their Match Momentum gauge over the course of a match, players revel in their improved abilities and confidence. * Mini-Games – The crazy Virtua Tennis series' signature mini-games are now in available in multiplayer mode and online. * Brand New World Tour – Players take their customizable tennis pros into the big leagues where every decision they make affects their career path. * All-star Lineup. of 22 Players – Includes Nadal, Federer, Murray, Sharapova, Williams, Djokovic, Ivanovic, Del Potro, Wozniacki and others. Additional Screenshots ----------------------
Show More
Reviews