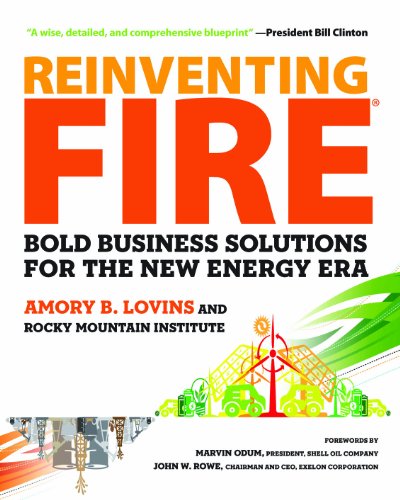 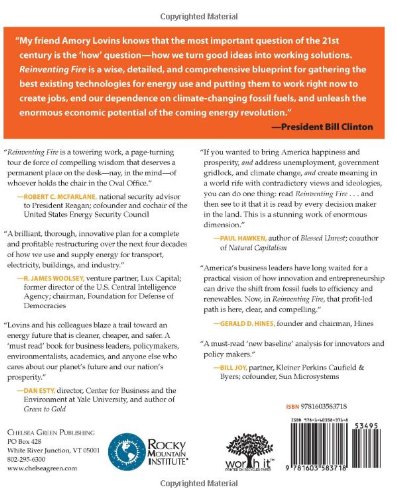 Book News-
Author Lovins, a government consultant on energy, is co-founder and chief scientist of Rocky Mountain Institute, an
independent think-tank on the use of natural resources. In this color illustrated book for business leaders and others,
Lovins predicts that if businesses start now to adopt currently available alternative energy technologies at normal
rates of return, the US can realistically stop using oil and coal by 2050, for a savings of $5 trillion. The author
argues that because the necessary legislation and public policy are already in place for the transition to clean power,
the transition can come about through market-based innovation across many different industries. After explaining the
true costs of oil and coal, the book focuses on transportation, building design, improvements in industry energy
efficiency, and carbon-free electricity generation. The book's reader-friendly layout includes color photos, charts, and
case and example boxes on every page, combined with an accessible writing style. While the contributors are all
affiliated with Rocky Mountain Institute, the book's content has been reviewed by outside experts as well. A web site
offers supporting methodological and technical material.

Choice-
Energy forms the basis of modern living and is tied to every country's economic, political, social, health, and
environmental policies. This well-documented work by energy expert Lovins (cofounder, Rocky Mountain Institute) and RMI
staff begins by discussing the growing economic and environmental impact of fossil fuel dependence. Next, separate
chapters address four different energy-intensive sectors in the US: transportation, buildings, industry, and
electricity. Each chapter includes data on current energy consumption along with ways to change existing patterns (e.g.,
new designs, renewable sources, more-efficient practices). The concluding chapter ‘Many Choices, One Future,’ looks at
the US in 2050: shortened workdays, decreased road traffic, a cleaner atmosphere, and a huge amount of capital formerly
wasted on fossil fuels available to address various social challenges. This assumes that the path charted in
‘Reinventing Fire’ is at work. The authors argue that their proposal is economically feasible and would create jobs,
positively impact the environment, and enhance the global competitiveness of the US. Among the barriers listed, the
resistance of political incumbents and an absence of visionary political leaders committed to these fundamental changes
stand out. A must read for anyone who deals with energy, especially decision makers. Summing up: Highly recommended.
Upper-division undergraduates through professionals; general readers.

ForeWord Reviews-
Reinventing Fire is an engaging and comprehensive introduction to the issues and challenges tied to our nation's energy
use. Amory Lovins is a noted authority on energy―especially its efficient use and sustainable supply. In 2009, Time
named him among the world's 100 most influential people, and Foreign Policy, one of the 100 top global thinkers. In
1982, Lovins co-founded the Rocky Mountain Institute (RMI), an independent, nonprofit think tank focused on the
‘efficient and restorative use of resources.’ The team's expertise is evident, as Lovins and fellow RMI researchers
outline the current state of energy use, including what they call the nation's "addiction to fossil fuels," and propose
an array of transformational solutions. Their long-term view emphasizes smart business strategy over public policy as
the route to the ‘new energy era.’ The ‘winners’ in this new era will be those companies, organizations―and even
nations―nimble and innovative enough to anticipate and realize the opportunities. Following a review of our energy
profile today, the book sets the stage with two contrasting scenarios for energy consumption in 2050, one that is
‘business as usual’ and one that ‘reinvents fire.’ The optimal scenario would reduce overall energy consumption through
innovation and efficiency, while increasing use of renewable sources and bringing a multitude of benefits―to the economy
and the environment, as well as to our health and national security. The challenges posed by this book are at once
inspirational and daunting, but Reinventing Fire makes it clear that facing them with passion and ingenuity is essential
to our future prosperity as a people and a nation.

"Amory and his 'reinventing fire' energy path should be part of the induction packs for all political, financial and
business leaders."--John Elkington, The Guardian

Reinventing Fire shows us that we neither need to freeze in the dark, nor go back to the Stone Age, to ensure a healthy,
habitable planet for ourselves and our descendants.--Andy Kerr, Home Power

"In crisp and vivid language, Amory Lovins sets out a blueprint for a much-improved future in the generation and use of
energy. We can all learn from reading this clear statement from a real expert."--George P. Shultz, former Secretary of
State and Secretary of the Treasury, distinguished fellow at Stanford University's Hoover Institution, former president
of Bechtel

"My friend Amory Lovins knows that the most important question of the twenty-first century is the 'how' question-how we
turn good ideas into working solutions. Reinventing Fire is a wise, detailed, and comprehensive blueprint for gathering
the best existing technologies for energy use and putting them to work right now to create jobs, end our dependence on
climate-changing fossil fuels, and unleash the enormous economic potential of the coming energy revolution."--President
Bill Clinton

"If you wanted to bring America happiness and prosperity, and address unemployment, government gridlock and climate
change, and create meaning in a world rife with contradictory views and ideologies, you can do one thing: read
Reinventing Fire...and then see to it that it is read by every decision maker in the land. This is a stunning work of
enormous dimension. Reinventing Fire outlines an eminently practical path to a durable and meaningful future by
reimagining how we use and produce the lifeblood of civilization-energy in its myriad forms."--Paul Hawken, author of
Blessed Unrest; co-author, Natural Capitalism

"Amory Lovins and his team of extraordinary professionals provide an analytically sound, detailed, compelling plan for
transforming our national use of energy-and for saving $5 trillion in the process! Reinventing Fire is a towering work,
a page-turning tour de force of compelling wisdom that deserves a permanent place on the desk-nay, in the mind-of
whoever holds the chair in the Oval Office."--Robert C. McFarlane, national security advisor to President Reagan;
co-founder and co-chair of the United States Energy Security Council

"America's business leaders have long waited for a practical vision of how innovation and entrepreneurship can drive the
shift from fossil fuels to efficiency and renewables. Now, in Reinventing Fire, that profit-led path is here, clear, and
compelling."--Gerald D. Hines, founder and chairman, Hines

Amory Lovins, a consultant physicist, is among the world's leading experts in energy and its links with resources,
security, development, and environment. He has advised the energy and other industries for four decades as well as the
U.S. Departments of Energy and Defense. His work in 50+ countries has been recognized by the "Alternative Nobel," Blue
Planet, Volvo, Zayed Future Energy (Runner-Up), Onassis, Nissan, Shingo, Goff Smith, and Mitchell Prizes, the Benjamin
Franklin and Happold Medals, MacArthur and Ashoka Fellowships, 11 honorary doctorates, honorary membership of the
American Institute of Architects, Foreign Membership of the Royal Swedish Academy of Engineering Sciences, honorary
Senior Fellowship of the Design Futures Council, and the Heinz, Lindbergh, Jean Meyer, Time Hero for the Planet, Time
International Hero of the Environment, Popular Mechanics Breakthrough Leadership, National Design, and World Technology
Awards.

A Harvard and Oxford dropout and former Oxford don, he has briefed 20 heads of state and advises major firms and
governments worldwide, recently including the leadership of Coca-Cola, Deutsche Bank, Ford, Holcim, Interface, and
Wal-Mart. He cofounded in 1982 and serves as Chairman and Chief Scientist of Rocky Mountain Institute, an independent,
market-oriented, entrepreneurial, nonprofit, nonpartisan think-and-do tank that creates abundance by design. His most
recent visiting academic chair was in spring 2007 as MAP/Ming Professor in Stanford's School of Engineering, offering
the University's first course on advanced energy efficiency (www.rmi.org/stanford). The latest of his 30 books
is Reinventing Fire: Bold Business Solutions for the New Energy Era. An anthology from his 1968-2010 work, The Essential
Amory Lovins, was released in 2011. He is also the co-author of the sustainable business classic, Natural Capitalism. In
2009, Time named him one of the 100 most influential people in the world, and Foreign Policy, one of the 100 top global
thinkers.