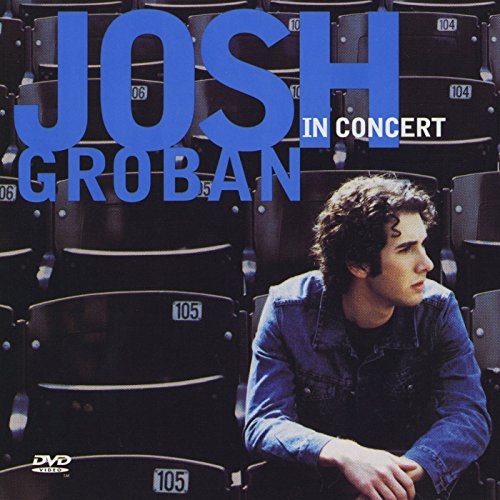 Brand : Groban Josh
from USA
to UAE
in 5-8 days
At your doorstep by Dec 05  to Dec 08 with standard delivery

Josh Groban In Concert is a special package, including a DVD featuring footage from his PBS Great Performances appearance and a CD including songs not available on his self-titled debut album. It tentatively features "Broken Vow," "For Always (from the A.I. soundtrack) and his exclusive Christmas song "O Holy Night," as well as selected tracks from the live PBS special. Additional footage includes a 20-minute conversation with Josh, David Foster, and John Williams and friends; a 5-minute Josh Groban home movie; and an exclusive Web link. .com ---- Josh Groban in Concert has all the ingredients to be a long-running PBS staple: a young (21), good-looking performer with a golden voice; songs in Italian and Spanish for the crossover crowd (i.e., Andrea Bocelli ( /exec/obidos/ts/artist-glance/26566/%24%7B0%7D ) and Sarah Brightman ( /exec/obidos/ts/artist-glance/136811/%24%7B0%7D )) and pop and movie songs for the mainstream; guest stars galore (David Foster, John Williams, Angie Stone, Andrea Corr, Lili Haydn); a large orchestra; and striking but not obtrusive visual effects. The centerpiece of this DVD-CD combo (also available in a DVD keepcase ( /exec/obidos/ASIN/B000077ZND/%24%7B0%7D )) is the 80-minute concert DVD, filmed in Pasadena in October 2002 and featuring numerous songs from Groban's debut CD ( /exec/obidos/ASIN/B00005RGNI/%24%7B0%7D ), including "You're Still You," which catapulted him into stardom when he sang it on TV's Ally McBeal. There are also two new songs--the ballad "Broken Vow," with Groban accompanied by Foster, and "For Always," with the orchestra conducted by John Williams, who wrote the song for the Steven Spielberg film A.I.. The 37-minute CD offers seven songs performed in the concert (including the two not on the previous CD, "Broken Vow" and "For Always"), plus "O Holy Night." The DVD has excellent picture and sound (PCM stereo, Dolby Digital 5.1, and DTS), interviews, and backstage footage, and the combination with the CD is an excellent value. Groban's fans, of course, will consider it a treasure at any price. --David Horiuchi
Show More
Reviews