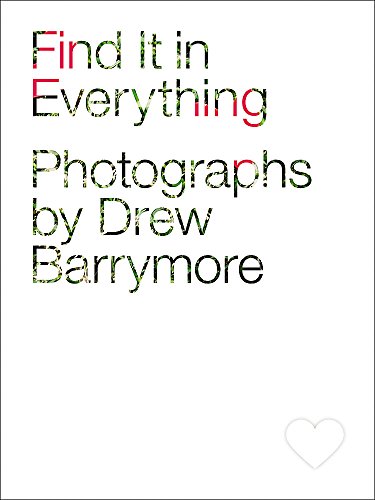 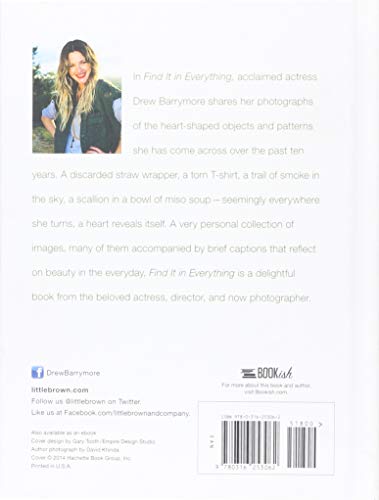 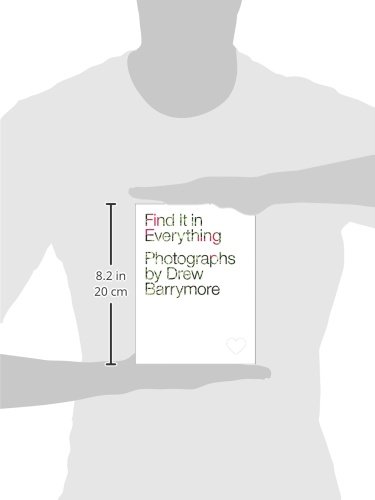 Find It in Everything: Photographs by Drew Barrymore Hardcover – January 14, 2014

"Barrymore's photographs are upbeat, sincere, and -- need we say it? -- heartfelt."―Detroit News and Free
Press

Drew Barrymore has been a favorite of film audiences since her role in the Steven Spielberg blockbuster E.T.: The
Extra-Terrestrial in 1982. In the following decades she earned praise from both critics and audiences for her
performances in a wide range of comedies and dramas. She has become a major force not only in front of the camera but
also behind the scenes, as a successful producer and director under her own Flower Films banner, with such hits as Never
Been Kissed, Charlie's Angels, 50 First Dates, He's Just Not That Into You, and Whip It. Outside of her film career,
Barrymore currently serves as the Ambassador Against Hunger for the United Nations World Food Program (WFP). In
addition, she recently launched the cosmetics line FLOWER Beauty and the wine label Barrymore Wines. Her photography has
been exhibited at the International Center of Photography in New York and has appeared in fashion campaigns.

Shop the largest choice of Arts And Photography online in the UAE. Browse thousands of great deals on drew barrymore products with fast, free delivery.