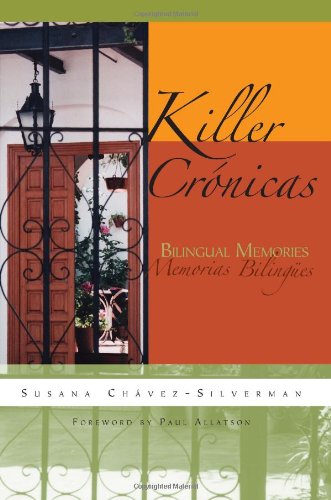 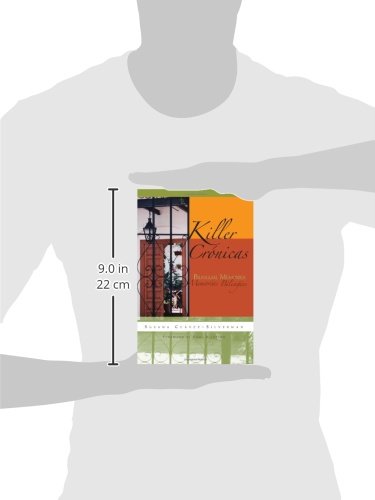 Readers new to California-born Chávez-Silverman's unapologetic and bold back-and-forth between English and
Spanish may at first be unable to classify what they are reading. It's quick, charming and utterly confusing to those
who don't speak some Spanish. But the author aims to wake readers up, make them think and develop a truly 21st-century
notion of multiculturalism. Early on in this bittersweet, often sarcastic and meditative memoir, Chávez-Silverman tells
readers, "Para explicar estos mis flights (of fancy), tendría que empezar por decir que soy, it is—my language—cual
homing pigeon on acid." As Chávez-Silverman, who teaches Romance languages and literatures at Pomona College, takes
readers across borders and through time, she throws together a bevy of words diverse and complex enough to represent her
vast variety of life experiences, from facing the challenges of being a Latina woman to dealing with loneliness, going
out dancing and exploring new cultures. This is a memoir of place, as Chávez-Silverman recounts feeling isolated and
alone in Johannesburg, at home in Los Angeles and as if she is searching in Buenos Aires. In his foreword, Latino
culture expert Paul Allatson rightly declares, "[T]he kinds of code-switching and linguistic inventions that
characterize [this book] represent a new 'American' literary and linguistic form." This is not a memoir written outside
the box; it is a memoir written to obliterate it.
Copyright © Reed Business Information, a division of Reed Elsevier Inc. All rights reserved.

"Susana Chávez-Silverman isn't a code-switcher but a switch-burner. Her Killer Crónicas is an astonishing example of
linguistic mestizaje. It's also a prophetic statement: north and south are no longer applicable coordinates to
understand the Americas. They have merged into a single gravitational order where languages are in constant
mutation."—Ilan Stavans, author of Spanglish: The Making of a New American Language

“A stirring memoir . . . practically a performance. Killer Crónicas is a testament to the maturing sense of global and
pan-Latin citizenship being claimed by Chicanos and U.S.-born Latinos in the American West. Combine this with such
innovation in language, and her book may one day be regarded as a refreshing turning point in Latino literature, maybe
even the truly bilingual literary voice that the pioneering Chicana critic Gloria Anzaldúa called for.”—Daniel
Hernandez, Los Angeles Times

"Susana Chávez-Silverman's Killer Crónicas: Bilingual Memories is a masterfully written memoir in the form of
'chronicles' exploring issues of memory, family relationships, and language. Her philosophical excursions on writing,
intertextuality, and life in general are brilliantly and humorously rendered in a bilingual format of code-switching
that evidences a superb knowledge of English and Spanish. This linguistic dexterity enables the crónicas to flow
effortlessly from one language to another and easily captivates the reader as he/she travels with the author in a most
enjoyable and fascinating journey from California to South Africa, Argentina, Spain, and Chile."— María Herrera-Sobek,
associate vice chancellor and Luis Leal Endowed Chair, University of California, Santa Barbara

"These chronicles are truly hemispheric, postmodern memories written in a ludic, singular Spanglish that encapsulates
the transnational, nomad vivencias of a Jewish Chicana from Califas, a citizen of the Hispanic world. Original, powerful
and profound."—Frances Aparicio, University of Illinois at Chicago

Shop the largest choice of Politics And Social Sciences online in the UAE. Browse thousands of great deals on susana chávez-silverman products with fast, free delivery.