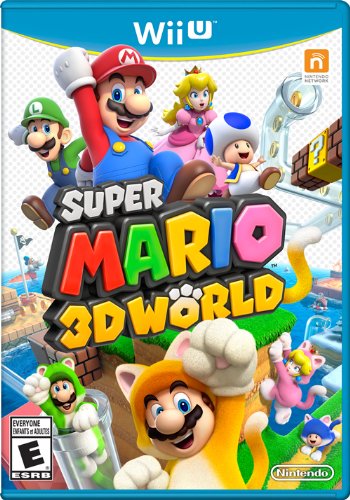 Each character has unique abilities and play styles. For example, Princess Peach glides over gaps, while Luigi has his trademark extra-high jump.

The new cat transformation allows players to run on all fours, pounce on enemies, attack in midair, or use their claws to scamper up walls and goal poles.

Use the Wii U GamePad Controller's touch screen to search for hidden blocks and freeze enemies in place.

No. of Players: Up to 4 players

Leap into the first multiplayer Mario platformer set in a 3D world! Play as Mario, Luigi, Princess Peach, and Toad—each
with their own special skills—in the all-new Sprixie Kingdom. Scamper up walls with the new cat power-up to find secrets
or pounce from above to claw enemies. Enjoy a solo romp or add friends on the fly for instant Mario multiplayer* magic!

Freely roam the world map and each sprawling stage alone or team up with friends to find hidden stars while competing
to take the crown for most coins and points found. Tap the Wii U GamePad controller’s touch screen to freeze enemies and
reveal invisible secrets. Or, use the GamePad for off-TV play while tilting it to spot hidden nooks and crannies with
the moveable camera. All this and more makes Mario’s world deeper than ever. Jump on in!

* The first multiplayer Mario platformer set in a 3D world
* Play as Mario, Luigi, Peach, or Toad and master their special talents
* Cat Mario can climb high to find secrets, pounce from above, and claw enemies
* Play off-TV on the Wii U GamePad or touch its screen to freeze enemies and reveal invisible objects

Strategically choose to play as Mario, Luigi, Peach, or Toad to make your way through Sprixie Kingdom.
View Larger

The all new cat power-up gives you advantages you’ve never had before – climb walls, pounce, and claw at your enemies!
View Larger