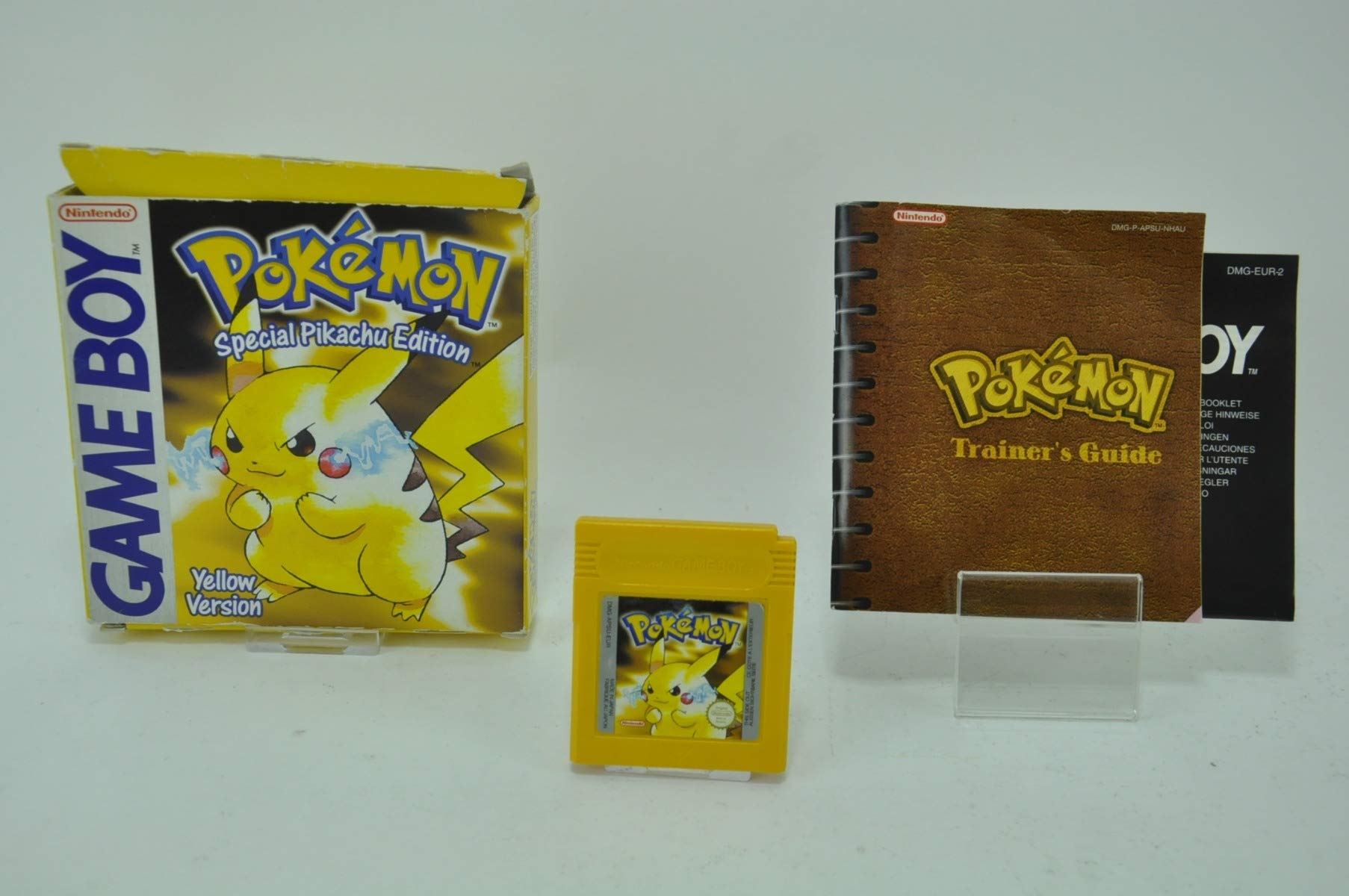 Product description ------------------- Nintendo Gameboy. Pokemon Special Pikachu EDITION. .com ---- While it's basically the same game as the previously released Pokémon Red ( /exec/obidos/ASIN/B00000IYEQ/%24%7B0%7D ) and Pokémon Blue ( /exec/obidos/ASIN/B00000IYER/%24%7B0%7D ), Pokémon Yellow: Special Pikachu Edition features enhancements that make it the best version yet. In all three versions, the player is on a quest to become the World's Greatest Pokémon Trainer, with exploration and Pokémon battles (think advanced paper-scissors-rock) factoring heavily into the gameplay. While the game world is the same in all three versions, the Pokémon you encounter vary from version to version; the underlying goal of collecting all 151 Pokémon can only be met by trading Pokémon via Link Cable ( /exec/obidos/ASIN/B00001XDVN/%24%7B0%7D ) with another player with a different Pokémon version. (Players can also battle against one another using the Link Cable setup.) Pokémon Yellow follows the TV cartoon series more closely than the other versions. Your first Pokémon in Yellow is Pikachu, and he travels alongside you as opposed to inside a Pokéball (like most Pokémon). Pikachu's mood can be displayed virtual pet style: keeping him happy is important, as his mood affects certain events in the game. In addition to the inclusion of other TV show elements like Team Rocket, new battle modes between players are available as well as a secret game called Pikachu's Beach. If you haven't played any of the Pokémon games before, Pokémon Yellow is the best place to start. But while Pokémaniacs will go gaga over Yellow's new features, less enthusiastic veterans of Red and Blue may not find the extras to be quite so special. --Joe Hon Pros: * Best version yet of the highly addictive Pokémon game * Pikachu's moods raise the game's cuteness bar to an all-new level * Features new battle modes between players * Includes Pikachu's Beach secret game Cons: * Pokémon battles can be repetitive at times * New features may not be enough for some Pokémon veterans P.when('A').execute(function(A) { A.on('a:expander:toggle_description:toggle:collapse', function(data) { window.scroll(0, data.expander.$expander[0].offsetTop-100); }); }); Review ------ It's here. The biggest news in the world of portable Pokemon gaming since the original Red and Blue titles hit the shelves so long ago. Pokemon - Special Pikachu Edition (Pokemon Yellow to you and me) may be a cynical marketing ploy to make millions of kids buy the same game all over again, but Nintendo has done it so well it's hard to care. You should be familiar with the premise by now, so we'll skip the banter and cut to the chase: What's new? Not a lot, though the differences are clearly noticeable. In many ways this feels like a slightly updated version of the original, with a few surprises here and there to keep long-time fans interested. Pikachu is given to you at the very start of the game - Oak even goes to the trouble of capturing it for you - and your rival, Gary, starts his Pokemon-collecting spree with Eevee instead of Squirtle, Bulbasaur, or Charmander. Dungeon layouts have been slightly altered, and different Pokemon are now found in new places than you would expect. For the visually conscious, new character portraits for each and every creature are a welcome sight. Full Game Boy Color support is noticeably lacking - we will have to wait for Gold and Silver, which will have it - but on a Super Game Boy this looks fantastic. Good to see that niche version of the world's most popular handheld still being supported so well. The modifications are mostly made to resemble the animated series as closely as possible. Encounters with Team Rocket now pit you against those lovable rogues Jesse and James, and Pikachu follows you around on the screen instead of staying inside his Pokeball. As this is the Special Pikachu Edition, everyone's favorite electric rat stars heavily. When you're not out catching 'em all, you can check on Pikachu's condition - a close-up view of him is always available, and his facial expressions indicate whether or not you need to spend some more quality time with him. Pikachu is at his happiest when he's sent into battle and kept well taken care of with potions. Oh, and before we forget, he even stars in a surfing minigame for no apparent reason. Overall, Yellow is just a stopgap to help us wait for the real sequels - Gold/Silver. Thankfully, the new challenges are enough to fill the hole - but only just. Good thing for Nintendo that Pikachu is so darn cute.... --Cameron Davis --Copyright ©1998 GameSpot Inc. All rights reserved. Reproduction in whole or in part in any form or medium without express written permission of GameSpot is prohibited. -- GameSpot Review See more ( javascript:void(0) )
Show More
Reviews