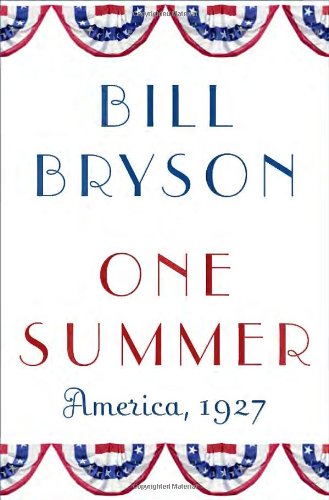 An Amazon Best Book of the Month, October 2013: It’s amazing what a talented writer at the top of his game can do with a
seemingly narrow topic. The title of Bill Bryson’s latest sums up the simplicity of his task: to document the “most
extraordinary summer” of 1927, beginning with Charles Lindbergh’s successful flight across the Atlantic. Even though we
know many of these stories--Lindbergh’s flight, Babe Ruth’s 60-homerun season, the Mississippi River flood, Al Capone’s
bullet-ridden reign over Chicago--in Bryson’s hands, and in the context of one amazing summer of twentieth-century
ingenuity and accomplishment, they feel fresh, lively, and just plain fun. The book is so jammed with “did you know it”
nuggets and fascinating origin stories (the opening of the Holland Tunnel, the first Mickey Mouse prototype, the source
of the term “hot dog”), the effect is like sitting beside a brilliant, slightly boozy barstool raconteur, who knows a
little bit about everything. From a tabloid murder trial to a flagpole-sitting record to the secret origins of the
looming Great Depression, One Summer offers a new look at a transitional period in history, re-introducing us to such
characters as Capone, Jack Dempsey, Al Jolson, Charles Ponzi, and Herbert Hoover. Ultimately, this is a book about the
moment when important things, for good or ill, began happening in the US. With a giddy narrative voice and keen eye for
off-kilter details, Bryson has spun a clever tale of America’s coming of age. --Neal Thompson