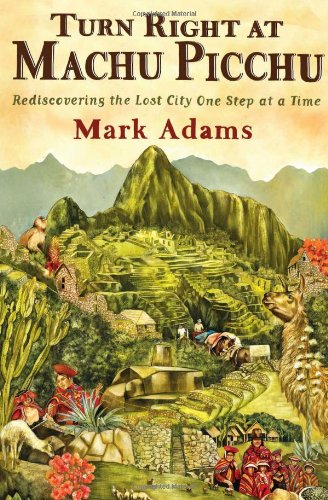 Turn Right at Machu Picchu: Rediscovering the Lost City One Step at a Time

"Like all great travelogues (and this is certainly one), 'Turn Right'..should come with a fedora and a rucksack."
-Men's Journal, Ten Best Nonfiction Books of 2011

"A serious (and seriously funny) travelogue, a smart and tightly written history, and an investigative report into
perhaps the greatest archaeological discovery in the last century."-Nationalgeographic.com

"Like Bill Bryson, Adams peppers his book with interesting anecdotes, trenchant observations and frequently hilarious
asides. But..the book's scholarship and its organization also call to mind John McPhee's 'Coming into the
Country'..You're guaranteed to be swept up in Adams' vivid descriptions."-BookPage

"Quite funny and unpretentiously well informed..Short of actually traveling to Machu Picchu yourself, it's the perfect
way to acknowledge the lost city's 100th birthday as a modern-day tourist site."-Christian Science Monitor ("Editor's
Choice")

"If you haven't been to Machu Picchu and environs, this book will inspire you to drop everything and go. And if you've
already been, Turn Right at Machu Picchu will transport you straight back to those soul-soaring heights."-National
Geographic Traveler ("Book of the Month")

"A story that hooks readers early and then sails along so interestingly that it's one of those 'can't put it down'
books. What more could armchair adventurers want?"-Associated Press

"Mark Adams crisscrossed the Andes and has returned with a superb and important tale of adventure and
archeology."-Sebastian Junger

MARK ADAMS is the author of the acclaimed history���Mr. America, which���The Washington Post���named a Best Book of
2009, and the���New York Times bestseller���Turn Right at Machu Picchu.��� He writes for many national magazines,
including���GQ, Men's Journal, and New York. He lives near New York City with his family.

Shop the largest choice of History online in the UAE. Browse thousands of great deals on mark adams products with fast, free delivery.