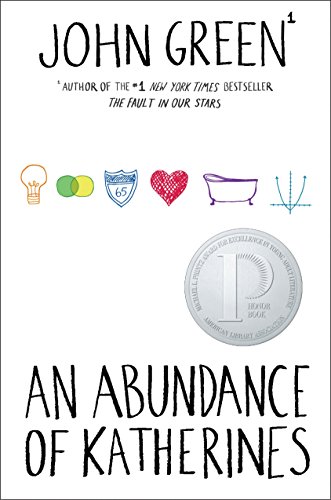 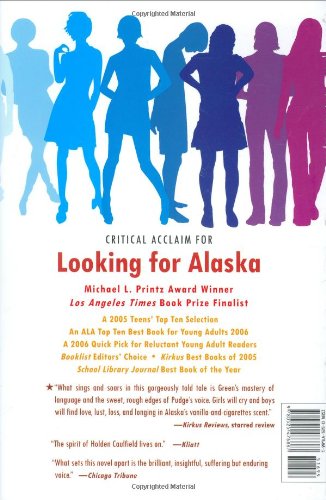 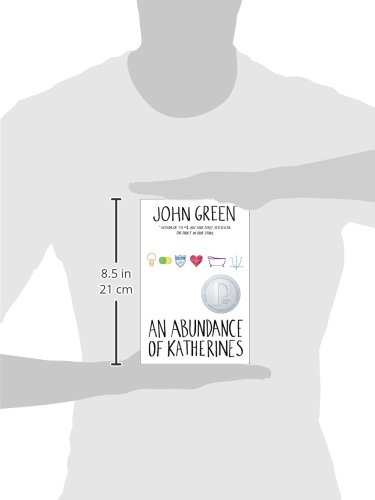 An Abundance of Katherines

Grade 9 Up–This novel is not as issue-oriented as Greens Looking for Alaska (Dutton, 2005), though it does
challenge readers with its nod to postmodern structure. Right after intellectual child-prodigy Colin Singleton graduates
from high school, his girlfriend (who, like the 18 young women and girls whom he claimed as girlfriends over the years,
is named Katherine) breaks up with him and sends him into a total funk. His best friend, Hassan, determines that he can
only be cured with a road trip. After some rather aimless driving, the two find themselves in Gutshot, TN, where locals
persuade them to stay. There, Colin spends his spare time working on a mathematical theorem of love, hypothesizing that
romantic relationships can be graphed and predicted. The narrative is self-consciously dorky, peppered with anagrams,
trivia, and foreign-language bons mots and interrupted by footnotes that explain, translate, and expound upon the text
in the form of asides. It is this type of mannered nerdiness that has the potential to both win over and alienate
readers. As usual, Greens primary and secondary characters are given descriptive attention and are fully and humorously
realized. While enjoyable, witty, and even charming, a book with an appendix that describes how the mathematical
functions in the novel can be created and graphed is not for everybody. The readers who do embrace this book, however,
will do so wholeheartedly.–Amy S. Pattee, Simmons College, Boston
Copyright © Reed Business Information, a division of Reed Elsevier Inc. All rights reserved.

Gr. 9-12. Green follows his Printz-winning Looking for Alaska (2005) with another sharp, intelligent story,
this one full of mathematical problems, historical references, word puzzles, and footnotes. Colin Singleton believes he
is a washed-up child prodigy. A graduating valedictorian with a talent for creating anagrams, he fears he'll never do
anything to classify him as a genius. To make matters worse, he has just been dumped by his most recent girlfriend (all
of them have been named Katherine), and he's inconsolable. What better time for a road trip! He and his buddy Hassan
load up the gray Olds (Satan's Hearse) and leave Chicago. They make it as far as Gutshot, Tennessee, where they stop to
tour the gravesite of Archduke Franz Ferdinand, and meet a girl who isn't named Katherine. It's this girl, Lindsey, who
helps Colin work on a mathematical theorem to predict the duration of romantic relationships. The laugh-out-loud humor
ranges from delightfully sophomoric to subtly intellectual, and the boys' sarcastic repartee will help readers navigate
the slower parts of the story, which involve local history interviews. The idea behind the book is that everyone's story
counts, and what Colin's contributes to the world, no matter how small it may seem to him, will, indeed, matter. An
appendix explaining the complex math is "fantastic," or as the anagrammatically inclined Green might have it, it's
enough to make "cats faint." Cindy Dobrez
Copyright © American Library Association. All rights reserved

“Laugh-out-loud funny…a coming-of-age American road trip that is at once a satire of and tribute to its many celebrated
predecessors.” –Horn Book, starred review

“Imagine an operating room at the start of a daring but well-rehearsed procedure and you will have something of the
atmosphere of “An Abundance of Katherines”: every detail considered, the action unrolling with grace and inevitability.”
--New York Times Book Review

John Green is the award-winning, #1 bestselling author of Looking for Alaska, An Abundance of Katherines,
Paper Towns, Will Grayson, Will Grayson (with David Levithan), and The Fault in Our Stars. His many accolades include
the Printz Medal, a Printz Honor, and the Edgar Award. He has twice been a finalist for the LA Times Book Prize. John
was selected by TIME magazine as one of the 100 Most Influential People in the World. With his brother, Hank, John is
one half of the Vlogbrothers (youtube.com/vlogbrothers), one of the most popular online video projects in the world. You
can join the millions who follow John on Twitter (@realjohngreen) and tumblr (fishingboatproceeds.tumblr.com) or visit
him online at johngreenbooks.com.

John lives with his family in Indianapolis, Indiana.

The morning after noted child prodigy Colin Singleton graduated fromhigh school and got dumped for the nineteenth time
by a girl named Katherine,he took a bath. Colin had always preferred baths; one of his general policiesin life was never
to do anything standing up that could just as easily bedone lying down. He climbed into the tub as soon as the water got
hot, andhe sat and watched with a curiously blank look on his face as the water overtookhim. The water inched up his
legs, which were crossed and folded intothe tub. He did recognize, albeit faintly, that he was too long, and too big,
forthis bathtub—he looked like a mostly grown person playing at being a kid.As the water began to splash over his skinny
but unmuscled stomach,he thought of Archimedes. When Colin was about four, he read a bookabout Archimedes, the Greek
philosopher who’d discovered that volumecould be measured by water displacement when he sat down in the bathtub.Upon
making this discovery, Archimedes supposedly shouted “Eureka!”[1] and then ran naked through the streets. The book said
that manyimportant discoveries contained a “Eureka moment.” And even then, Colinvery much wanted to have some important
discoveries, so he asked hismom about it when she got home that evening.

“Mommy, am I ever going to have a Eureka moment?”

“I wanna have a Eureka Moment,” he said, the way another kid mighthave expressed longing for a Teenage Mutant Ninja
Turtle.

She pressed the back of her hand to his cheek and smiled, her face soclose to his that he could smell coffee and makeup.
“Of course, Colin baby.Of course you will.”

But mothers lie. It’s in the job description.

Colin took a deep breath and slid down, immersing his head. I am crying, hethought, opening his eyes to stare through
the soapy, stinging water. I feellike crying, so I must be crying, but it’s impossible to tell because I’m
underwater.But he wasn’t crying. Curiously, he felt too depressed to cry. Too hurt.It felt as if she’d taken the part of
him that cried.

He opened the drain in the tub, stood up, toweled off, and got dressed.When he exited the bathroom, his parents were
sitting together on his bed.It was never a good sign when both his parents were in his room at the sametime. Over the
years it had meant:

2. You’re letting a girl named Katherine distract you from your studies.

3. Babies are made through an act that you will eventually find intriguingbut for right now will just sort of horrify
you, and also sometimespeople do stuff that involves baby-making parts that does not actuallyinvolve making babies, like
for instance kiss each other in placesthat are not on the face.

4. A girl named Katherine called while you were in the bathtub. She’ssorry. She still loves you and has made a terrible
mistake and is waitingfor you downstairs.

But even so, Colin couldn’t help but hope that his parents were in the roomto provide news of the Number 4 variety. He
was a generally pessimistic person,but he seemed to make an exception for Katherines: he always felt theywould come back
to him. The feeling of loving her and being loved by herwelled up in him, and he could taste the adrenaline in the back
of histhroat, and maybe it wasn’t over, and maybe he could feel her hand in hisagain and hear her loud, brash voice
contort itself into a whisper to sayI-love-you in the very quick and quiet way that she had always said it. Shesaid I
love you as if it were a secret, and an immense one.

His dad stood up and stepped toward him. “Katherine called my cell,”he said. “She’s worried about you.” Colin felt his
dad’s hand on his shoulder,and then they both moved forward, and then they were hugging.

“We’re very concerned,” his mom said. She was a small woman withcurly brown hair that had one single shock of white
toward the front. “Andstunned,” she added. “What happened?”

“I don’t know,” Colin said softly into his dad’s shoulder. “She’s just—she’d had enough of me. She got tired. That’s
what she said.” And then hismom got up and there was a lot of hugging, arms everywhere, and his momwas crying. Colin
extricated himself from the hugs and sat down on his bed.He felt a tremendous need to get them out of his room
immediately, like ifthey didn’t leave he would blow up. Literally. Guts on the walls; his prodigiousbrain emptied out
onto his bedspread.

“Well, at some point we need to sit down and assess your options,” hisdad said. His dad was big on assessing. “Not to
look for silver linings, but itseems like you’ll now have some free time this summer. A summer class atNorthwestern,
maybe?”

“I really need to be alone, just for today,” Colin answered, trying to conveya sense of calm so that they would leave
and he wouldn’t blow up. “Socan we assess tomorrow?”

“Of course, sweetie,” his mom said. “We’ll be here all day. You justcome down whenever you want and we love you and
you’re so so special,Colin, and you can’t possibly let this girl make you think otherwise becauseyou are the most
magnificent, brilliant boy—” And right then, the mostspecial, magnificent, brilliant boy bolted into his bathroom and
puked hisguts out. An explosion, sort of.

“I just need to be alone,” Colin insisted from the bathroom. “Please.”When he came out, they were gone.

For the next fourteen hours without pausing to eat or drink or throw upagain, Colin read and reread his yearbook, which
he had received just fourdays before. Aside from the usual yearbook crap, it contained seventy-twosignatures. Twelve
were just signatures, fifty-six cited his intelligence,twenty-five said they wished they’d known him better, eleven said
it was funto have him in English class, seven included the words “pupillary sphincter,”[2] and a stunning seventeen
ended, “Stay Cool!” Colin Singleton couldno more stay cool than a blue whale could stayskinny or Bangladesh
couldstayrich. Presumably, those seventeen people were kidding. He mulled thisover—and considered how twenty-five of his
classmates, some of whomhe’d been attending school with for twelve years, could possibly havewanted to “know him
better.” As if they hadn’t had a chance.

But mostly for those fourteen hours, he read and reread KatherineXIX’s inscription:

Eventually, he found the bed too comfortable for his state of mind, so he laydown on his back, his legs sprawled across
the carpet. He anagrammed “yrsforever” until he found one he liked: sorry fever. And then he lay there in hisfever of
sorry and repeated the now memorized note in his head and wantedto cry, but instead he only felt this aching behind his
solar plexus. Cryingadds something: crying is you, plus tears. But the feeling Colin had wassome horrible opposite of
crying. It was you, minus something. He keptthinking about one word—forever—and felt the burning ache just beneathhis
rib cage.It hurt like the worst ass-kicking he’d ever gotten. And he’d gotten plenty.

Shop the largest choice of Teen And Young Adult online in the UAE. Browse thousands of great deals on john green products with fast, free delivery.