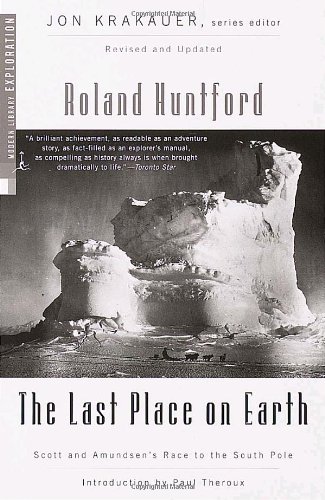 The Last Place on Earth: Scott and Amundsen's Race to the South Pole, Revised and Updated (Modern Library Exploration)

On December 14, 1911, the classical age of polar exploration ended when Norway's Roald Amundsen conquered the South
Pole. His competitor for the prize, Britain's Robert Scott, arrived one month later--but died on the return with four of
his men only 11 miles from their next cache of supplies. But it was Scott, ironically, who became the legend, Britain's
heroic failure, "a monument to sheer ambition and bull-headed persistence. His achievement was to perpetuate the
romantic myth of the explorer as martyr, and ... to glorify suffering and self-sacrifice as ends in themselves." The
world promptly forgot about Amundsen.

Biographer Ronald Huntford's attempt to restore Amundsen to glory, first published in 1979 under the title Scott and
Amundsen, has been thawed as part of the Modern Library Exploration series, captained by Jon Krakauer (of Into Thin Air
fame). The Last Place on Earth is a complex and fascinating account of the race for this last great terrestrial goal,
and it's pointedly geared toward demythologizing Scott. Though this was the age of the amateur explorer, Amundsen was a
professional: he left little to chance, apprenticed with Eskimos, and obsessed over every detail. While Scott clung fast
to the British rule of "No skis, no dogs," Amundsen understood that both were vital to survival, and they clearly won
him the Pole.

Amundsen in Huntford's view is the "last great Viking" and Scott his bungling opposite: "stupid ... recklessly
incompetent," and irresponsible in the extreme--failings that cost him and his teammates their lives. Yet for all of
Scott's real or exaggerated faults, he understood far better than Amundsen the power of a well-crafted sentence. Scott's
diaries were recovered and widely published, and if the world insisted on lionizing Scott, it was partly because he told
a better story. Huntford's bias aside, it's clear that both Scott and Amundsen were valiant and deeply flawed. "Scott
... had set out to be an heroic example. Amundsen merely wanted to be first at the pole. Both had their prayers
answered." --Svenja Soldovieri