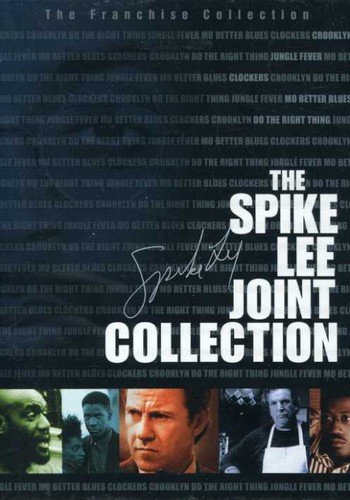 Spike Lee is one of the most acclaimed and controversial directors of all time. Now five of his most provocative, thought-provoking films are available in one collection. From the breakout hit dramedy DO THE RIGHT THING to the gritty, urban CLOCKERS, Lee peels away life's layers, exposing the ironies, brutalities, rhythms and prejudices of the naked city in this powerful collector's set. .com ---- Clockers Based on the riveting bestseller by Richard Price, this 1995 crime drama was directed by Spike Lee with such authority and authenticity that it has the hyper-real quality of a stylized documentary. Fully capturing the thoroughly researched detail of Price's novel, the film focuses on Strike (newcomer Mekhi Phifer), a young, ambitious "clocker"--or drug dealer--who works the streets of his New York housing project, selling drugs for a local supplier named Rodney (played with ferocious charisma by Delroy Lindo). Just as Strike is struggling to get away from his dead-end life of crime, another dealer is murdered in a fast-food restaurant and local detectives (Harvey Keitel, John Turturro) consider Strike the primary suspect. In cowriting the script with novelist Price, Lee uses this murder mystery to explore the plague of guns and black-on-black crime in America's inner cities, in which drugs and death are familiar routines of daily life. The film doesn't pretend to offer solutions, nor does it dwell on the problem with numbing insistence. Rather, this taut, well-acted film takes the viewer into a world often hidden in plain sight--a world where options seem nonexistent for youth conditioned to have little or no expectation beyond a probable early death. Lee and Price are deadly serious in handling this volatile subject (which incorporates racism, powerless law enforcement, and political indifference), but Clockers is also blessed with humor, insight, and humanity. It's one of Lee's most confidently directed films, signaling a creative maturity that Lee continued to develop throughout the 1990s. --Jeff Shannon Jungle Fever Spike Lee's 1991 story about an interracial relationship and its consequences on the lives and communities of the lovers (Wesley Snipes, Annabella Sciorra) is one of his most captivating and focused films. Snipes and Sciorra are very good as individuals trying to reach beyond the limits imposed upon them for reasons of race, tradition, sexism, and such. Lee makes an interesting and subtle case that they are driven to one another out of frustration with social obstacles as well as pure attraction--but is that enough for love to survive? John Turturro is featured in a subplot as an Italian American who grows attracted to a black woman and takes heat from his numbskull buddies. --Tom Keogh Do the Right Thing Spike Lee's incendiary look at race relations in America, circa 1989, is so colorful and exuberant for its first three-quarters that you can almost forget the terrible confrontation that the movie inexorably builds toward. Do the Right Thing is a joyful, tumultuous masterpiece--maybe the best film ever made about race in America, revealing racial prejudices and stereotypes in all their guises and demonstrating how a deadly riot can erupt out of a series of small misunderstandings. Set on one block in Bedford-Stuyvesant on the hottest day of the summer, the movie shows the whole spectrum of life in this neighborhood and then leaves it up to us to decide if, in the end, anybody actually does the "right thing." Featuring Danny Aiello as Sal, the pizza parlor owner; Lee himself as Mookie, the lazy pizza-delivery guy; John Turturro and Richard Edson as Sal's sons; Lee's sister Joie as Mookie's sister Jade; Rosie Perez as Mookie's girlfriend Tina; Ossie Davis and Ruby Dee as the block elders, Da Mayor and Mother Sister; Giancarlo Esposito as Mookie's hot-headed friend Buggin' Out; Bill Nunn as the boom-box toting Radio Raheem; and Samuel L. Jackson as deejay Mister Señor Love Daddy. A rich and nuanced film to watch, treasure, and learn from--over and over again. --Jim Emerson Mo' Better Blues With Mo' Better Blues, the story of a young trumpeter's rise to jazz-world stardom, Spike Lee set out to counter Clint Eastwood's cliché-ridden biopic of Charlie Parker in Bird. But the final product, a slick, glossy drama (with hip-hop jazz provided by Gangstarr no less), is just as superficial as the numerous Alger-esque stories of music stardom to which movie audiences are accustomed. Denzel Washington gives a typically charismatic performance as the trumpeter in question, as does Wesley Snipes as his sax-playing rival. And as with most Spike Lee films, there are numerous solid performers in small roles such as Bill Nunn, Latin-music star Rubén Blades, and comedian Robin Harris. One character, however, attracted unwanted attention: John Turturro's role as an unscrupulous music-industry exec. Critics called the Turturro character, who is at once money hungry, swarthy, and perpetually shrouded in darkness, a classic anti-Semitic caricature. But the charge seems almost irrelevant in Spike Lee's cartoonish, overstylized world of impossibly hunky jazzmen, curvaceous hangers-on, and incessant bebop. --Ethan Brown Crooklyn Spike Lee's semiautobiographical, 1994 film about the good and bad times for a Brooklyn family in the '70s has passion and nostalgic good feeling, but it is also a mess of random reflections and arbitrary storytelling. The centerpiece of the movie is a little girl (Zelda Harris) who views the ups and downs of her parents' experiences (mom and dad are played by Delroy Lindo and Alfre Woodard), and who navigates the life of her neighborhood. Lee tosses in a lot of '70s detail (watching The Partridge Family) and other diversions (Harris's journey through suburbia), but he has no master sensibility controlling the flow of it all. The film is more wearying than anything, although bright spots include Lindo's fine performance as a talented man suffering from irrelevance. --Tom Keogh
Show More
Reviews