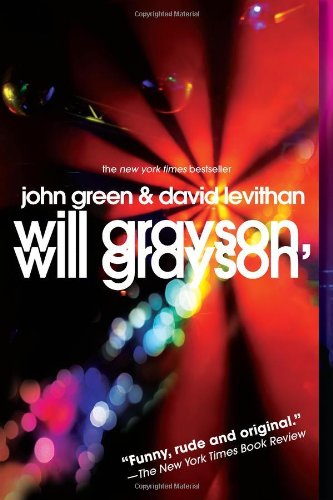 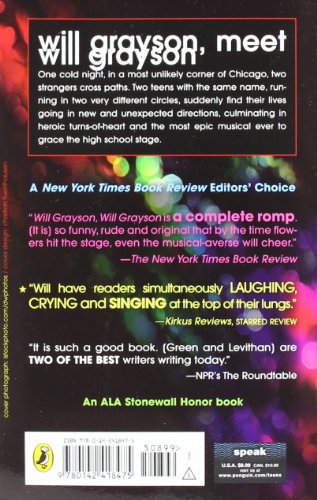 Amazon Best Books of the Month, April 2010: What's in a name? A pretty fantastic book idea, for starters. At heart, Will
Grayson, Will Grayson is about a couple of kids figuring out how to be themselves. Two of those kids happen to have the
same name, and not much in common outside of that, but their serendipitous friendship sets the stage for a much larger,
braver, and more candid story than the simplicity of the plot might suggest. The relevance for teens here is clear--high
school is the only time in your life when you have the undivided opportunity to obsess over your every move, sentence,
and outfit change--but the part about understanding who you are doesn't stop when you graduate. That's what makes Will
Grayson, Will Grayson as interesting a pick for adults as it is for teens: the questions don't get simpler, but looking
at them through the eyes of a 16-year-old brings a welcome sense of honesty and humor to this thing called life. No
one's ever too old to enjoy that. --Anne Bartholomew

Will Grayson, Will Grayson is about two teenage boys with the same name, whose lives intersect in unexpected ways. The
book originated with the thought of giving two different boys the same name, and to give that name some meaning. It
also comes from David's own experience. So to give you an inside peek at the making of the book, we figured it would be
fun to give you insight into our own names, as well as Will Grayson’s.

To my knowledge, there are only two other David Levithans in the world – my dad’s cousin, and a lawyer in South Africa
who, as far as we can tell, isn’t family. The last name Levithan is actually the invention of an immigration official –
when my great-grandfather came to America from Russia, it should have translated to Levitan. But somehow the h got in
there. Now, whenever I meet another Levithan (which is rare), odds are good that he or she is related to me.

That said, the story of Will Grayson, Will Grayson came from someone whose name is close to mine, but not identical.
David Leventhal went to Brown at the same time I did, and people would confuse us often.

This ended up being something of a joke, because David was an extraordinary dancer, while I was…not an extraordinary
dancer. So people would exclaim, “We had no idea someone as clumsy as you could be so graceful on stage!” and I’d have
to say, “Well, un, that wasn’t me.” Finally, right before graduation, I contacted David and we met up. We became instant
friends, and when we both moved to New York after college, we were always in each other’s company. The similarity of our
names often threw people for a loop… and I thought, well, that might make an interesting story.

I was named after my great-grandfather, John Michael Crosby, an itinerant minor-league baseball manager and occasional
catcher. I like my name, but being a John Green can certainly be inconvenient, because there are a lot of us. Among many
others, there is John Green the realtor in Mississippi (who owns johngreen.com, much to my chagrin), John Green the
Australian botanist, and of course John Green the world-renowned Bigfoot scholar. This last John Green, who is so
revered in the field of Bigfoot research that he is often called “one of the four horseman of Sasquatchery,” is kind of
my mortal enemy. I once wrote a magazine article in which I passingly noted that Bigfoot is, you know, fictional, and
John Green replied with a letter arguing that my anti-Bigfoot stance was besmirching the good name of John Greens
everywhere.

Such is the curse of being a John Green. Or a Will Grayson, for that matter.

We decided that I (David) would choose our character’s first name, and John would choose his last name. I liked the
name Will because of its different, sometimes contradictory, meanings. As a noun, it can be so strong – where there’s a
will, there’s a way, and whatnot. But as a verb, it’s split. Sometimes it’s just as definite (It will be done!), but
that definiteness is underscored by an uncertainty – you say it will be done, but it hadn’t been done yet, has it? And
put it at the start of a question (“Will you still love me tomorrow?”) and it becomes the entrance for all kinds of
vulnerability. That seemed right for the characters.

I liked Grayson because whenever I would hear that name, it always sounded to me like “grace in,” which always struck
me as a richly ambiguous phrase – is “grace in” the beginning of a clause or the end of it? Are we being asked to find
grace in something, or to let grace in? Those questions seemed like interesting ones for the guy I wanted to write
about.