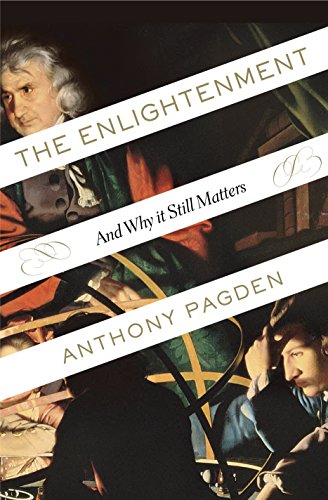 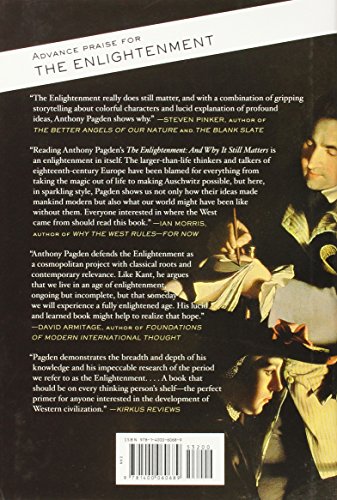 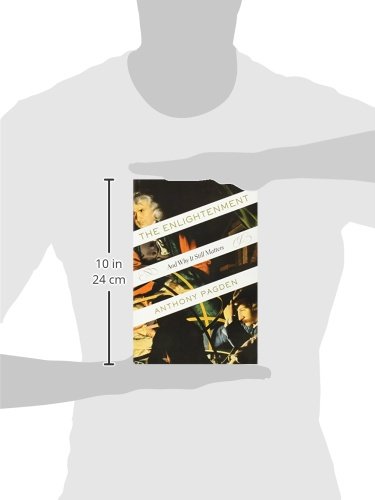 The Enlightenment: And Why It Still Matters

“Perhaps the most significant footnote in the entire history of Western thought,” muses Padgen, appeared in
a 1783 journal in Berlin. The footnote asked, “What is enlightenment?” Answering the question is this work’s project,
which Padgen conducts through eighteenth-century intellectuals associated with the Enlightenment. Unlike the
philosophers and theologians of the preceding Renaissance and Reformation, who engaged in rediscovery or restoration of
the past, Enlightenment thinkers repudiated traditions thought to fetter human beings. Religion, law, government, and
social customs came under criticism from writers who varied in the subjects they contemplated but generally were
animated by belief in the power of reason to define human nature and design human society. Partly a process of
demolition, as in attacks on the claims of Christianity, and partly a process of construction, as in the beginnings of
social sciences like economics, the course of the Enlightenment unfolds in Padgen’s presentations of major figures
Locke, Montesquieu, Voltaire, Rousseau, Hume, Adam Smith, and Kant. Readers interested in the origins of modernity,
progressivism, and conservatism will find much to ponder in Padgen’s substantive history of ideas. --Gilbert Taylor

“Sweeping . . . Like being guided through a vast ballroom of rotating strangers by a confiding
insider.”—The Washington Post

“A political tract for our time.”—The Wall Street Journal

“For those who recognize the names Hegel, Hume, Rousseau, Kant, Voltaire, and Diderot but are unfamiliar with their
thought, [Anthony] Padgen provides a fantastic introduction, explaining the driving philosophies of the period and
placing their proponents in context. . . . Padgen’s belief that the Enlightenment ‘made it possible for us to think . .
. beyond the narrow worlds into which we are born’ is clearly and cogently presented.”—Publishers Weekly (starred
review)

“The Enlightenment really does still matter, and with a combination of gripping storytelling about colorful characters
and lucid explanation of profound ideas, Anthony Pagden shows why.”—Steven Pinker, author of The Better Angels of Our
Nature and The Blank Slate

“Reading Anthony Pagden’s The Enlightenment: And Why It Still Matters is an enlightenment in itself. The
larger-than-life thinkers and talkers of eighteenth-century Europe have been blamed for everything from taking the magic
out of life to making Auschwitz possible, but here, in sparkling style, Pagden shows us not only how their ideas made
mankind modern but also what our world might have been like without them. Everyone interested in where the West came
from should read this book.”—Ian Morris, author of Why the West Rules—For Now

“Anthony Pagden defends the Enlightenment as a cosmopolitan project with classical roots and contemporary relevance.
Like Kant, he argues that we live in an age of enlightenment, ongoing but incomplete, but that someday we will
experience a fully enlightened age. His lucid and learned book might help to realize that hope.”—David Armitage, author
of Foundations of Modern International Thought

“Pagden demonstrates the breadth and depth of his knowledge and his impeccable research of the period we refer to as the
Enlightenment. . . . A book that should be on every thinking person’s shelf—the perfect primer for anyone interested in
the development of Western civilization.”—Kirkus Reviews

Shop the largest choice of Politics And Social Sciences online in the UAE. Browse thousands of great deals on anthony pagden products with fast, free delivery.