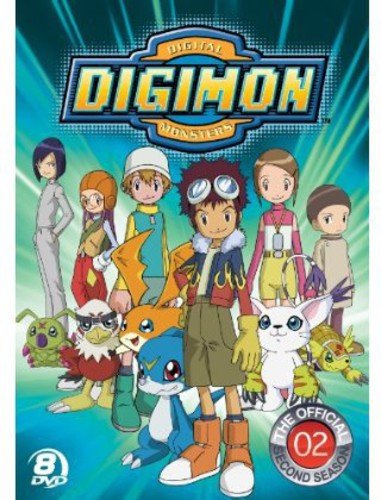 Product Description ------------------- Commonly referred as Digimon Zero Two, The Complete Second Season is the direct sequel to Season 1 and takes place four years after the original series. With most of the original characters now in junior high school, the Digital World was supposedly secure and peaceful. However, a new evil has appeared in the form of the Digimon Emperor, a human just like the DigiDestined, who has been enslaving all Digimon. Three new children are chosen to save the Digital World and, along with T.K. and Kari, make up the new generation of DigiDestined. Characters: ----------- Davis Motomiya, Grade: 7, Partner: Veemon Ken Ichijouji, Grade: 7, Partner: Wormmon T.K. Takaishi, Grade: 7, Partner: Patamon Cody Hida, Grade: 4, Partner: Armadillomon Kari Kamiya, Grade: 7, Partner: Gatomon Yolei Inoue, Grade: 7, Partner: Hawkmon Special Features ---------------- * 36-page Character Guide; Villain Photo Gallery .com ---- The second season of Digimon picks up four years after the original DigiDestined brought peace to the digital world. An evil Digimon Emperor has seized control of the digital world, and since some of the original DigiDestined have moved on to high school, new kids Davis, Yolei, and Cody join T.K. and Kari in the ranks of the DigiDestined and travel to the digital world to fight the Emperor and the evil he's spreading. The DigiDestined discover that the Digital Emperor is someone from the human world, so they must change the way they fight to ensure success. Finding Digi-Eggs, which allow the DigiDestined's Digimon to digivolve, remains a high priority, but when the dark control spires and digispirals that the Emperor is rapidly constructing keep the Digimons from digivolving, the destruction of the spires becomes an even more pressing directive. Then Arukenimon, another new enemy, enters the scene, and it looks like darkness may prevail in the digital world and beyond. The DigiDestined's fight in the digital world helps each of the DigiDestined find their own inner strength and begin to realize the true power of dreams and optimism. Besides making them stronger as individuals and as a team, the DigiDestined also discover that working together enables their Digimon to digivolve to their respective Champion stages and then to digivolve in combination with other Champion Digimon to the extremely powerful Ultimate Digimon stage. The Digimon series is nicely animated, full of action and suspense, and highly appealing to kids ages 7 to 10 as well as to the young adults who grew up with the series in the late 1990s and early 2000s. Bonus features include a villain photo gallery and a 32-page character guide booklet. --Tami Horiuchi P.when('A').execute(function(A) { A.on('a:expander:toggle_description:toggle:collapse', function(data) { window.scroll(0, data.expander.$expander[0].offsetTop-100); }); }); Review ------ NewVideoGroup have done it again, they are going to release the second season of digimon which is one of my favorite seasons. --Rave Mystery Now we can see all 50 episodes of it in this soon-to-be-a-hit DVD set! --ToonXpert87 I enjoy watching it still it's fun, cartoony, and sometimes so over the top its still worth the watch. --TheNerdCollector About the Actor --------------- Motoko Kumai (born September 8, 1970 in Tokyo, Japan) is a Japanese voice actress employed by 81 Produce. Her most notable roles are Takao Kinomiya on Beyblade and Syaoran Li on Cardcaptor Sakura. From December 21, 2006 until October 2007, Motoko left her voice career due to an illness requiring medical treatment. Hiroki Takahashi (born September 7, 1974 in Tokyo) is a Japanese voice actor best known for the role of Eiji Kikumaru in The Prince of Tennis, Kenji Harima in School Rumble and Katsuya Jonouchi in Yu-Gi-Oh. He works at Big Shot/Interchannel. He also has voice acted in some yaoi Drama CDs such as Love Neco, Bukiyou na Silent, and Koi cha no Osahou. He is the current voice of Ryu from the Street Fighter series. Yasuhiro Takato (born January 23, 1968 in Okayama) is a Japanese voice actor who works for Aoni Production. About the Director ------------------ Hiroyuki Kakud (born September 28, 1959) is a Japanese anime director. He is best known for directing the first two Digimon series. See more ( javascript:void(0) )
Show More
Reviews