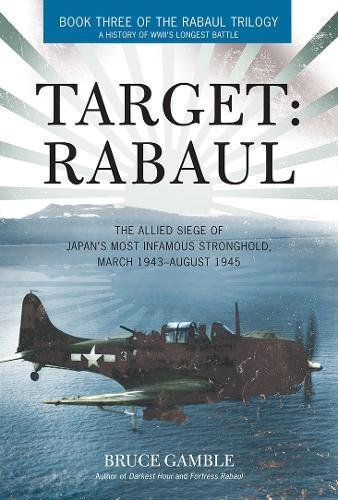 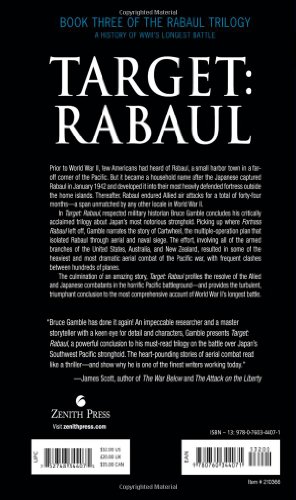 As the final book in Bruce Gamble's esteemed trilogy on the War in the Pacific, Target: Rabaul picks up where Fortress
Rabaul, the second installment, leaves off--and sets the stage for the major Allied aerial engagements of 1943-1945,
which would result in the defeat of Japan.

March 1943, Washington, D.C.: Major General George Kenney, commander of the 5th Air Force, begins to formulate plans
for Cartwheel--a 2-year campaign to neutralize Rabaul, Japan's most notorious stronghold, with the use of unescorted
daylight bombing raids against the base and the heavily-defended satellite installations nearby. The undertaking would
prove to be anything but straightforward, and the story of Rabaul's destruction remains one of the most gripping of
World War II's Pacific Theater. In Target: Rabaul, award-winning military historian Bruce Gamble expertly narrates the
Allied air raids against the stronghold: the premature celebrations by George Kenney and Gen. Douglas MacArthur; the
bequeathing of authority to Adm. William F. "Bull" Halsey; the unprecedented number of near-constant air battles that
immediately followed; the Japanese retreat to Truk Lagoon in 1944; and their ultimate surrender to Allied forces in
August 1945. This amazing story, one that profiles the bravery and resolve of the Allies in the horrific Pacific
battleground, is the turbulent conclusion to an acclaimed trilogy from one of today's most talented nonfiction military
authors.

Shop the largest choice of Japan online in the UAE. Browse thousands of great deals on imusti products with fast, free delivery.