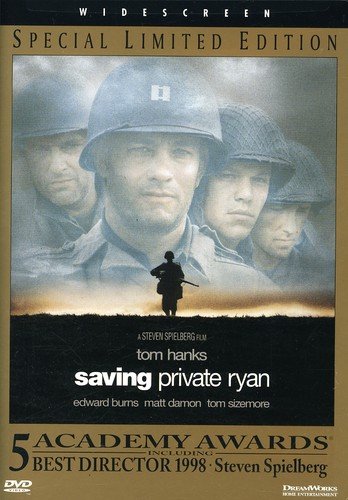 Seen through the eyes of a squad of American soldiers, the story begins with World War II's historic Omaha Beach D-Day invasion, then moves beyond the beach as the men embark on a dangerous special mission. Captain John Miller (Hanks) must take his men behind enemy lines to find Private James Ryan, whose three brothers have been killed in combat. Face with impossible odds, the men question their orders. Why are eight men risking their lives to save just one? Surrounded by the brutal realities of war, each man searches for his own answer -- the strength to triumph over an uncertain future with honor, decency and courage. .com ---- When Steven Spielberg was an adolescent, his first home movie was abackyard war film. When he toured Europe with Duel in his 20s, he saw old men crumble in front of headstones at Omaha Beach. That image became the opening scene of Saving Private Ryan, his film of a mission following the D-day invasion that many have called the most realistic--and maybe the best--war film ever. With 1998 production standards, Spielberg has been able to create a stunning, unparalleled view of war as hell. We are at Omaha Beach as troops are slaughtered by Germans yet overcome the almost insurmountable odds. A stalwart Tom Hanks plays Captain Miller, a soldier's soldier, who takes a small band of troops behind enemy lines to retrieve a private whose three brothers have recently been killed in action. It's a public relations move for the Army, but it has historical precedent dating back to the Civil War. Some critics of the film have labeled the central characters stereotypes. If that is so, this movie gives stereotypes a good name: Tom Sizemore as the deft sergeant, Edward Burns as the hotheaded Private Reiben, Barry Pepper as the religious sniper, Adam Goldberg as the lone Jew, Vin Diesel as the oversize Private Caparzo, Giovanni Ribisi as the soulful medic, and Jeremy Davies, who as a meek corporal gives the film its most memorable performance. The movie is as heavy and realistic as Spielberg's Oscar-winning Schindler's List, but it's more kinetic. Spielberg and his ace technicians (the film won five Oscars: editing (Michael Kahn), cinematography (Janusz Kaminski), sound, sound effects, and directing) deliver battle sequences that wash over the eyes and hit the gut. The violence is extreme but never gratuitous. The final battle, a dizzying display of gusto, empathy, and chaos, leads to a profound repose. Saving Private Ryan touches us deeper than Schindler because it succinctly links the past with how we should feel today. It's the film Spielberg was destined to make. --Doug Thomas P.when('A').execute(function(A) { A.on('a:expander:toggle_description:toggle:collapse', function(data) { window.scroll(0, data.expander.$expander[0].offsetTop-100); }); }); Additional Features ------------------- This "special edition" contains the 25-minute featurette Into the Breach. Besides interviews with the film's actors, there are interviews with D-day veterans and World War II historian Stephen Ambrose. Real D-day footage is edited together with scenes from the film that have been changed to black and white. The highlight is a glimpse of Steven Spielberg's early films. Using his dad's camera and his friends, the teenage Spielberg made two relatively impressive short war films, Escape to Nowhere and Fighter Squad. There are also home movies his dad made while stationed in the Pacific and a short visit with the Nilands, a family that lost four brothers during the war. --Doug Thomas See more ( javascript:void(0) )
Show More
Reviews